Does suramin or pine needle tea cure autism and serve as an antidote to people's adverse reactions to COVID-19 vaccines? No, that's not true: There is no evidence pine needle tea contains suramin, a drug invented by Bayer in the 20th century. The claims about suramin are made without evidence by a leading propagator of COVID and vaccine misinformation. While pine needle tea is believed to have medicinal properties, there is no scientific consensus that it or suramin cures autism or counteracts any of the rare negative side effects of the vaccines approved for use against COVID. There is not, as of this writing, a medication that treats autism.

The claim appears in a TikTok video clip, circulated via a September 19, 2021, Instagram post under the title "THE ANTIDOTE w/ Dr. Judy Mikovits." In the video, Mikovits says:

You can inoculate the tiniest amount of Suramin and reverse autism 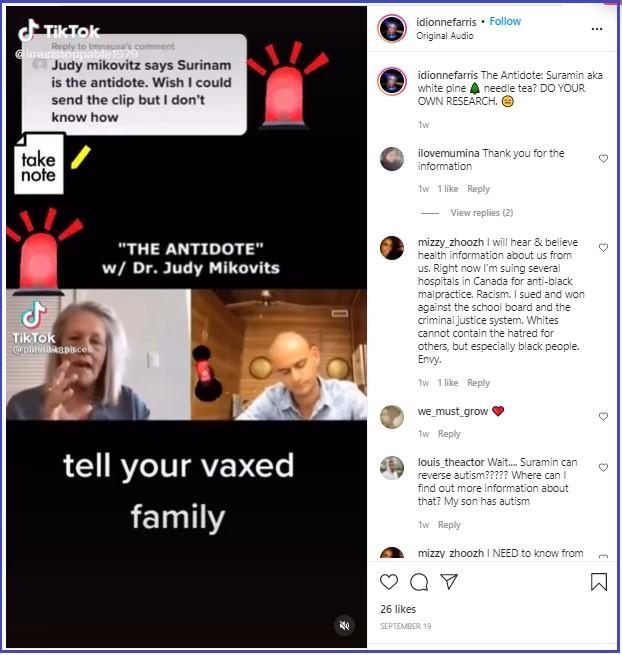 The person posting the video makes the connection between suramin and pine needle tea in the first comment on it. There is no publicly available evidence pine needle tea contains suramin, which is a product developed by Bayer.

The Department of Agriculture says the seeds of all pine trees are edible and that pine needles were brewed into tea by aboriginal peoples to treat headaches.

On the video, Mikovits, a Ph.D. researcher whose COVID misinformation Lead Stories had debunked three times as of this writing (collected fact checks archived here), declares it both a cure for autism and an antidote to vaccine side-effects.

A man on the video asks: "Do you know of any way to heal oneself from the injuries from the current injection?"

There's an antidote, because these people wouldn't be injecting people unless they knew the answer. Suramin. S.U.R.A.M.I.N. This is the most important antidote. It's a hundred-year-old essential medicine, WHO essential medicine for African sleeping sickness. You can inoculate the tiniest amount of Suramin and reverse autism.

There is no medication that cures autism, says the National Institutes of Health (NIH), which is the major funder of independent medical research in the U.S.

On the NIH website, autism cures are addressed like this: "Currently, there is no medication that can cure autism spectrum disorder (ASD) or all of its symptoms. But some medications can help treat certain symptoms associated with ASD, especially certain behaviors." On the site, suramin is not listed as one of the medications that can treat symptoms.

One small and, as of September 2021, unreplicated study at the University of California/San Diego suggests that in animals and humans, suramin might temporarily reduce some symptoms of autism spectrum disorder. It was not a study of suramin. It was a study of a metabolic function that may cause some autism symptoms. Only five boys were tested. The research team says more research is needed and warned, on the university's website, against overstating the findings, writing:

Special note from the researchers: Suramin is not approved for the treatment of autism. Like many intravenous drugs, when administered improperly by untrained personnel, at the wrong dose and schedule, without careful measurement of drug levels and monitoring for toxicity, suramin can cause harm. Careful clinical trials will be needed over several years at several sites to learn how to use low-dose suramin safely in autism, and to identify drug-drug interactions and rare side effects that cannot currently be predicted. We strongly caution against the unauthorized use of suramin.

Suramin's approved use is to defeat African sleeping sickness. It has been studied, with mixed success, as an anti-cancer agent. Neither sleeping sickness nor cancer are thought to be side effects of the COVID-19 vaccines.

Based on data gathered during the roll-out of three COVID vaccines approved by the Food & Drug Administration, the agency reports on its website that five rare conditions are being tracked to determine if they are caused by the vaccine:

Lead Stories emailed the media relations staff of Bayer on September 29, 2021, to inquire about claims made for suramin and will add their response when it is received. Meanwhile, a search of Bayer's website finds no such claims for suramin and no mention of suramin being found in pine needle tea.