Did conservative commentator Ben Shapiro tweet that his wife sleeps in her own bedroom in a Columbus Day message? No, that's not true: A tweet allegedly by Shapiro that claimed his daughter "went into my wife's bedroom," is a fake satirical message.

My daughter woke me up this morning and asked me what day it was. I asked, "is it Columbus Day?" She replied: "YEP!" She then went into my wife's bedroom and asked her the same question. I couldn't be prouder 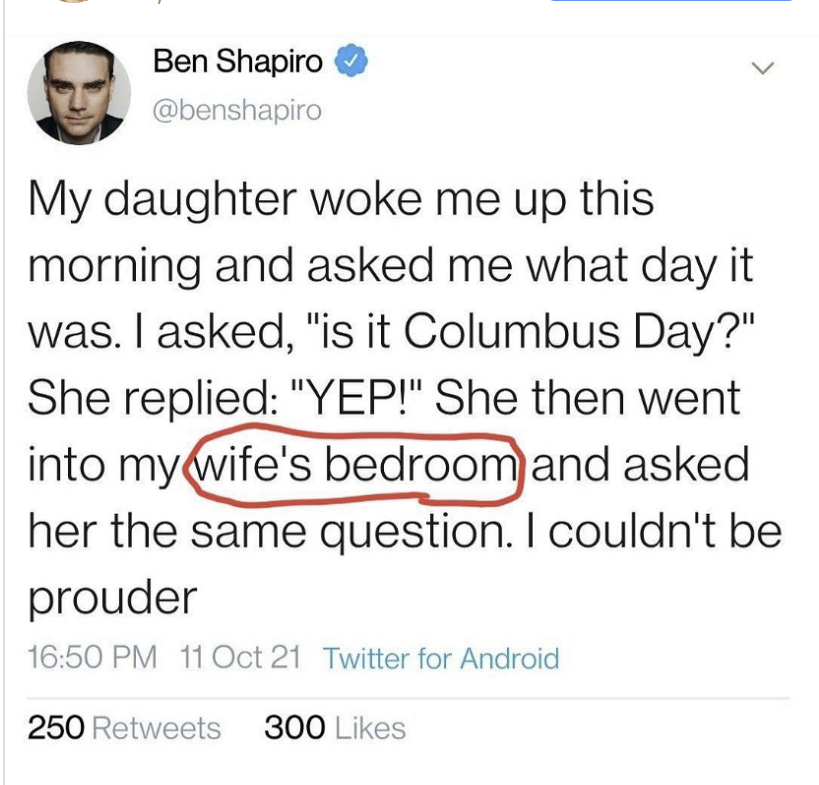 The fake tweet had the words "wife's bedroom" circled in red, implying that Shapiro's wife does not share a bedroom with him.

The Way Back Machine Internet Archive took five screenshots of Shapiro's Twitter account on October 11, none of which show a posted message about his "wife's bedroom" and "Columbus Day":

The earliest version of the fake tweet appears on the reddit subreddit "r/ToiletPaperUSA," which is a humorous thread:

Shapiro was previously mocked about a tweet he posted about his wife's opinion of Cardi B's song "WAP," but that was a real tweet:

As I also discussed on the show, my only real concern is that the women involved -- who apparently require a "bucket and a mop" -- get the medical care they require. My doctor wife's differential diagnosis: bacterial vaginosis, yeast infection, or trichomonis.