The claim appeared in a manipulated video (archived here) posted to the website of conspiracy theorist Simon Parkes. The video is titled:

Did Joe Biden Really Say He's Not The President?

The description of the video read "F**k Joe Biden, unprecedented reaction from the Audience... Did Joe Biden really say he's not the President?"

Did Joe Biden Really Say He's Not The President?

The video was manipulated to support the claim presented in the title. Biden's face and his audio along with the background footage are from the aforementioned campaign rally held in Kansas City, Missouri, on March 7, 2020, eight months before the 2020 presidential election. In the actual footage -- which, unlike the altered video, did not include anyone chanting expletives at Biden -- Biden responded to inaudible interruptions by three hecklers here starting at the 32:48-mark:

You have reason to be upset, would you listen, will you listen? Would you be willing the three of you to talk to me after this is over because I'm gonna make sure you're not the victim when I'm president of the United States of America. You can't be. I can't do anything now, I'm not the president.

The origin of the altered video's audio of a crowd shouting expletives at Biden is more ambiguous. There are several instances of such behavior, including at sporting and music events.

In the manipulated video, Biden's podium was also clearly altered to display his name on top of a bloody handprint, which was not his campaign logo. On the day of the rally, the podium displayed Missouri for Biden information, which is shown in the screenshot from actual footage of the rally included below: 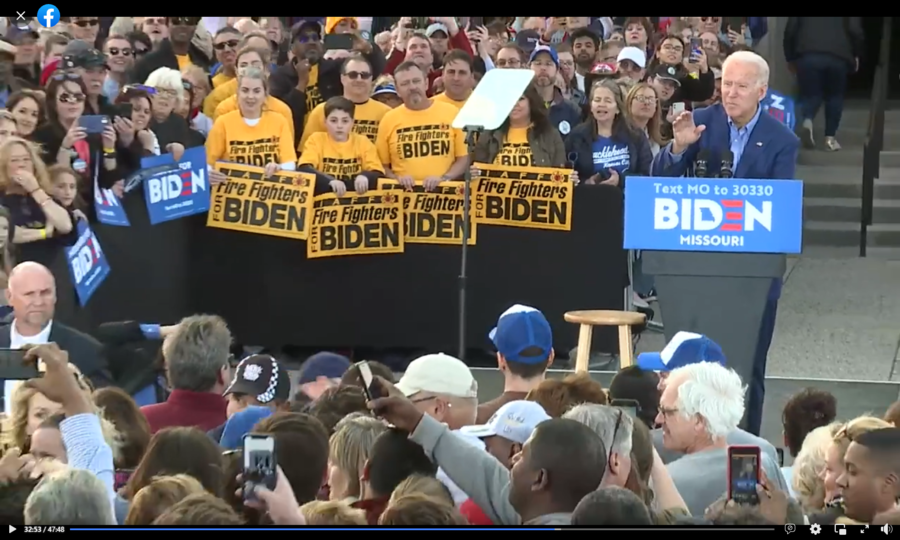