Did retired Lt. Gen. Steven L. Kwast reveal "surprising classified information" at a conference in Washington, D.C. -- that the United States has the technology to teleport human beings? No, that's not true: While Kwast did say that the technology could be built today to allow any human being to be delivered from any place on Earth to any other place on Earth in under an hour, never specified that what he was talking about was teleportation, as opposed to hypersonic air travel.

The claim appears in a video published on Facebook by the page "Mysterious Society" on October 27, 2021, under the title "Commander assures that the US has the technology to teleport people." It opened:

Commander assures that the US has the technology to teleport people 😱 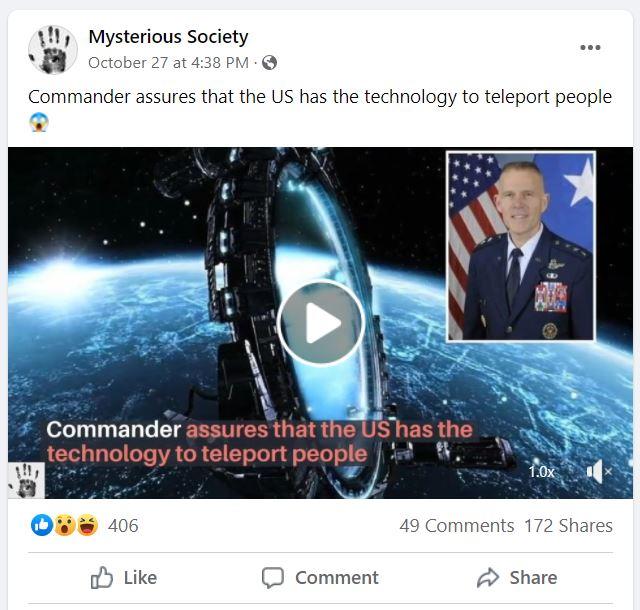 This almost seven-minute-long video with a robot voiceover has two distinct segments. The first segment is 3½ minutes long and references a speech Kwast gave at a conference in Washington. The transcript for this segment is an August 7, 2021, article published on the website mysteriousthing.com titled, "Commander assures that the US has the technology to teleport people." That website is linked to the Mysterious Society Facebook page. The transcript of the second segment of the video is the text of a June 15, 2014, article in discovermagazine.com titled, "Will Human Teleportation Ever Be Possible?"

At 0:48 in the video, the robot voiceover reads:

Kwast, who retired in 2019, believes advanced technology will determine who will lead the world in space. But at one point in the conference, he made a shocking revelation:

'The technology is in the engineering benches today,' [said] Lt. Gen. Kwast. 'But most Americans and most members of Congress haven't had time to really look at what's going on here.

'But I have had the benefit of 33 years of study and friendship with these scientists. This technology can be built today with non-development technology to take any human being from anywhere on planet Earth to any other place in less than an hour.'

While the last two quotations, with minor differences, were spoken by Kwast during his speech, the quote in bold mentioning the ability to teleport humans was not a part of his speech. Kwast never said that.

The video of Kwast's speech at Hillsdale College in Washington, titled, "Steven Kwast | The Urgent Need for a U.S. Space Force," was posted to YouTube on December 5, 2019. This (link) is queued to 12:00, when Kwast speaks of the engineering benches. Later, at 16:00, Kwast again mentions the ability to deliver a person to anywhere on Earth in less than an hour but he never uses the term teleport, nor does he specify the type of technology that would do this:

But here's why space is so much more powerful and why this question of the Space Force is so important. It's because we have competition today. If the development of space to do these things that I just described to you transform the transportation economy to be able to deliver anybody anywhere on planet Earth in less than an hour, transform the energy market where everybody can trickle-charge their batteries and capacitors to power anything on planet Earth from anywhere without any power lines, any power plants, transform information where you can get information about what's going on around you, and you don't need to be near a city or near a cell tower, because you're delivering it from a network in space that can deliver it to every human being.

Lead Stories reached out to John M. Nichol, associate professor of physics at the University of Rochester. He and other researchers have been exploring quantum teleportation. We asked if he could provide some needed context. He replied by email on October 29, 2021:

I think the issue is that 'teleportation' means something pretty specific, at least in physics. And I think what Kwast is talking about is not teleportation. In physics, teleportation is a way to transport the state or characteristics of one object to another instantly. Right now, this can be done with very small objects, like atoms or electrons, but not people.

What Kwast is talking about sounds reasonable. Transporting people anywhere on earth in less than 1 hour could perhaps be done with hypersonic transport, and delivering energy or wifi from space is not crazy. However, neither of these things is teleportation.

Lead Stories also reached out to Kwast for comment and will update if we receive a reply.