Did the FBI say that there were no killings at Sandy Hook Elementary School in 2012, the same year as the mass shooting at the school that resulted in 26 deaths? No, that's not true: Although data from the FBI's Crime in the U.S. 2012 publication list zero murders in Newtown, Connecticut, where the school was located, the figures in those data were reported under the Uniform Crime Reporting (UCR) program by the law agencies handling the cases. In this case, Connecticut State Police, the agency that handled the mass shooting, submitted the appropriate data to the FBI at a later date. At the time of writing, the killings are included in the FBI Crime Data Explorer, which is updated more frequently than the annual Crime in the U.S. publication series.

The claim most likely originated from a 2014 article published on InfoWars, the media company founded by Alex Jones. Jones has faced legal repercussions from families of some of the Sandy Hook mass shooting victims for his previous claims that the shooting was a hoax, although he has since admitted that it happened. The 2014 Infowars article cited the Crime in the U.S. 2012 data that list "Offenses Known to Law Enforcement" in Connecticut, by city. The data show Newtown as having experienced zero murders or non-negligent manslaughters.

But the FBI did not supply these data on its own. The data declaration for Crime in the U.S. 2012 clarifies that agencies in charge of the cases submit the data:

In an email to Lead Stories on October 21, 2021, J. Paul Vance, the former media relations commander of the Connecticut State Police who provided the public with information about the Sandy Hook mass shooting and is now retired, explained the data delay:

State Police submitted data to FBI at a later date.
The case took 364!days to complete that was the priority not data reporting

The 2012 expanded homicide data provided by Connecticut State Police to the FBI and are counted in the Crime Data Explorer do include the Sandy Hook Elementary School killings. Lead Stories reached out to the Connecticut State Police for more information about locating data about the Sandy Hook killings in the Crime Data Explorer. In an email sent on October 21, 2021, a spokesperson passed along a response from the agency's Crime Analysis Unit:

It was reported under CT State Police, rather than Newtown. So it is in a different section.

Lead Stories located the data in the Crime Data Explorer by taking the following steps:

We scrolled down to Expanded Homicide Offense Characteristics (not Counts) by Connecticut State Police and changed the dates from "2012" to "2012." 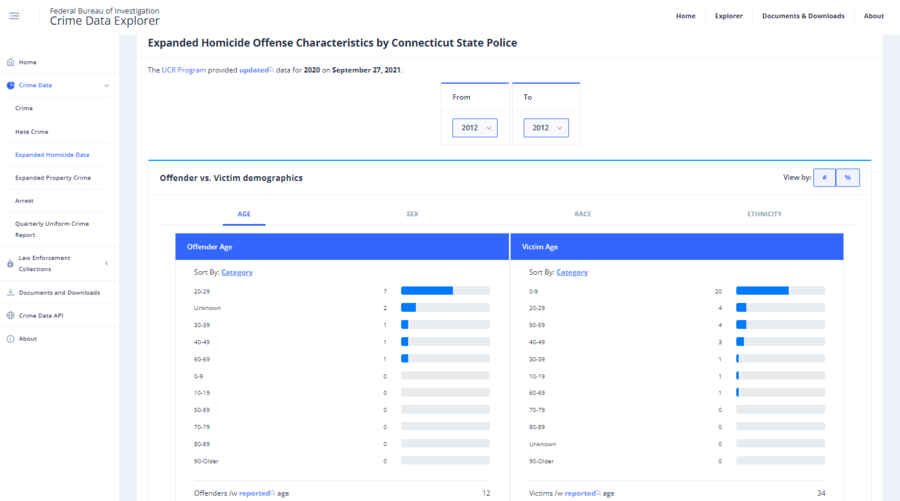 The first category shown was Offender vs. Victim Demographics, with the data displayed by age as the default. Proof of the existence of the Sandy Hook mass shooting data was evident: 20 individuals aged 0 to 9 years old are shown as victims, the same number of children who were killed as a result of the mass shooting. Six adults were also killed at the school.

According to Connecticut state crime data from 2012, the 20 children killed at Sandy Hook were the only murders that appeared to be reported for the less than 10 years old age demographic of murder victims.

Besides the data included in the Crime Data Explorer, the FBI has documented the Sandy Hook killings, publicly releasing more than 1,500 pages of documents about the case in 2017.