Have 250,000 deaths been caused by the COVID-19 vaccine in the United States? No, that's not true: There is no proof that 250,000 deaths have been caused by receiving a COVID-19 vaccine. In a video, Dr. Zev Zelenko shares no evidence of hundreds of thousands of people dying from the COVID vaccine, only citing a debunked claim by a "whistleblower" to say it is his opinion and offering no data to back up the claim.

The claim appeared as a video published by Bitchute on October 17, 2021, titled "250,000 VAXXED AMERICANS DEAD? - Dr. Zev Zelenko" (archived here), which opened with a commercial: 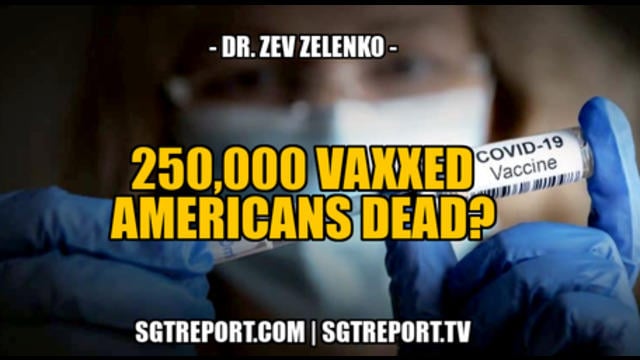 The video opens with Dr. Vladimir "Zev" Zelenko, who identifies himself as a family practitioner in a small community mostly inhabited by Hasidic Jews in upstate New York. Zelenko rose to fame after conservative media helped him sell a purported COVID treatment called "Z-Stack" that sells for up to $55 per bottle of pills. An April 2, 2020, article in the New York Times described how the small-town doctor's COVID treatment protocol, which included the drug hydroxychloroquine, caught the attention of then-President Donald Trump and was promoted by the president's lawyer, Rudy Giuliani.

In the video, Zelenko never offers any evidence or published and peer-reviewed studies to back up his claim. The video begins with Zelenko claiming:

A study came out in Vietnam that people that were vaccinated had a 251 time increase in viral load, the viral, amount of virus in them when they get sick, when compared to the unvaccinated. So it turns out it's the vaccinated patients that are actually getting sicker. They're the ones that are spreading the virus and so on. And a similar study came out of China. It's a thousand-fold. So in my opinion if the whistleblower is saying 50,000 you easily have 250,000 dead Americans.

While Zelenko makes claims that Lead Stories has previously debunked about ivermectin and miscarriage rates in pregnant women who have received the vaccine, this fact check focuses only on his claim that 250,000 Americans are dead from the COVID vaccine.

There was a study in 2009, that was a Harvard study, that showed that only 1% of actual events are reported to VAERS. Most likely death and stroke and heart attack are reported at higher rates. But even if it is 10 or 20% we're still looking at a massive underreporting. You can safely multiply whatever number we're being told by a factor of five. So, in my opinion if the whistleblower is saying 50,000, you easily have 250,000 dead Americans.

When evaluating data from VAERS, it is important to note that for any reported event, no cause-and-effect relationship has been established ... VAERS collects data on any adverse event following vaccination, be it coincidental or truly caused by a vaccine. The report of an adverse event to VAERS is not documentation that a vaccine caused the event ... VAERS reports can be submitted voluntarily by anyone, including healthcare providers, patients, or family members. Reports vary in quality and completeness. They often lack details and sometimes can have information that contains errors.

As Lead Stories previously debunked here, an anonymous "whistleblower" in a July 19, 2021, lawsuit against the secretary of health and human services did not prove that 45,000 people died within three days of receiving a COVID vaccine:

It's her 'opinion' that a five-fold multiplier of a list of unverified reports is warranted. The Food & Drug Administration (FDA) has repeatedly said that informal list of vaccine injury reports cannot be used to precisely tally vaccine effects. Declaring herself an expert in data analytics, the witness says -- without providing her statistical model -- that it is her opinion the number of deaths (about 9,000) reported to the Vaccine Adverse Event Reporting System (VAERS) should be multiplied by five. To access VAERS data, users must confirm that they understand the data is subject to several statistical limitations. This is because health issues and deaths that, chronologically, occur after vaccination may be caused by underlying illnesses or other factors unrelated to a vaccination, none of which is known until each report is authenticated and each cause of death is investigated.

Zelenko, who claims he is a "a conspiracy realist, not a conspiracy theorist," in the video, does not offer any proof for his claim of the number of Americans who have died after taking a COVID vaccine.

According to the Centers for Disease Control and Prevention, 730,368 people have died from COVID-19 in the United States as of October 21, 2021, and 189.9 million people are fully vaccinated (the COVID Data Tracker counts people as being "fully vaccinated" if they received two doses on different days (regardless of time interval) of the two-dose mRNA series or received one dose of a single-dose vaccine).

The CDC has stated that COVID-19 vaccines are safe and effective overall. On a resource page updated October 18, 2021, about adverse events after COVID-19 vaccination, the organization said:

Reports of death after COVID-19 vaccination are rare. More than 408 million doses of COVID-19 vaccines were administered in the United States from December 14, 2020, through October 18, 2021. During this time, VAERS received 8,878 reports of death (0.0022%) among people who received a COVID-19 vaccine. FDA requires healthcare providers to report any death after COVID-19 vaccination to VAERS, even if it's unclear whether the vaccine was the cause. Reports of adverse events to VAERS following vaccination, including deaths, do not necessarily mean that a vaccine caused a health problem. A review of available clinical information, including death certificates, autopsy, and medical records, has not established a causal link to COVID-19 vaccines. However, recent reports indicate a plausible causal relationship between the J&J/Janssen COVID-19 Vaccine and TTS, a rare and serious adverse event--blood clots with low platelets--which has caused deaths.