Does this photo show what Michelle Obama looked like in April 2017? No, that's not true: This photo has a fake five o'clock shadow added. Michelle Obama has been targeted by baseless claims that she is not a woman before, and this altered image is part of that trope.

The original photo of Michelle Obama went viral on April 2, 2017. In 2018 Twitter account @robcormier26 tweeted an altered image at least four times. The image was altered to add a five o'clock shadow to Michelle Obama's jawline. More recently a post with a grainy version of the altered photo was published on Facebook on October 19, 2021. Additional meme text was added to the picture that said:

WHEN YOUR HUSBAND IS NO LONGER PRESIDENT 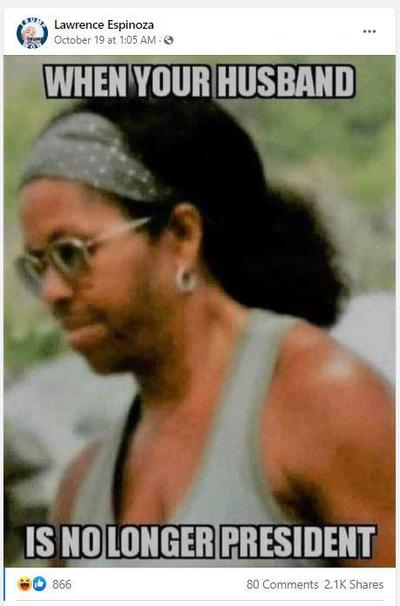 A candid photo of Michelle Obama, showing her wearing a headband with her naturally textured hair in a loose ponytail, went viral when it was posted on Twitter on April 2, 2017. Several other publications like dailymail.co.uk, huffingtonpost.fr and okayafrica.com wrote about the photo and the positive response so many people had to her natural hair compared to the straightened styles she was usually seen wearing. The exact date and location of the photo was never identified in the articles; it was only suggested that she was on vacation. A tweet by @AJ+ showed a collection of people's happy reactions.

Michelle Obama rocked her natural hair while on vacation, and people are freaking out. pic.twitter.com/wwJ4qMt1Eu

A search for the image on TinEye, sorted by most changed, shows that by 2018 someone had altered the photo to add a fake five o'clock shadow on Michelle Obama's face. The TinEye webcrawler identified that a now-suspended Twitter account @robcormier26 posted the altered image at least four times on Twitter in 2018.

Lead Stories has debunked other altered photos of Michelle Obama in the past, including one in a blue dress with a faked penis bulge and one image of the Obamas as a young couple.