Was former White House Chief of Staff John Podesta executed at the U.S. government's prison facility at Guantanamo Bay, Cuba? No, that's not true: The claim is "false," the Department of Defense told Lead Stories. The claim was published without on-the-record attribution to knowledgeable sources or any other evidence, and without specific disclaimers saying whether the article is fiction, parody or commentary. Podesta, who served as President Bill Clinton's chief of staff and ran Hillary Clinton's 2015 campaign for president, is a frequent target of QAnon and other conspiracists, who baselessly claim he helps traffic in children whose adrenal gland output is harvested for elites to attain immortality.

The claim originated as an article published by Real Raw News on June 1, 2021, titled "John Podesta Executed At GITMO" (archived here) which opened: 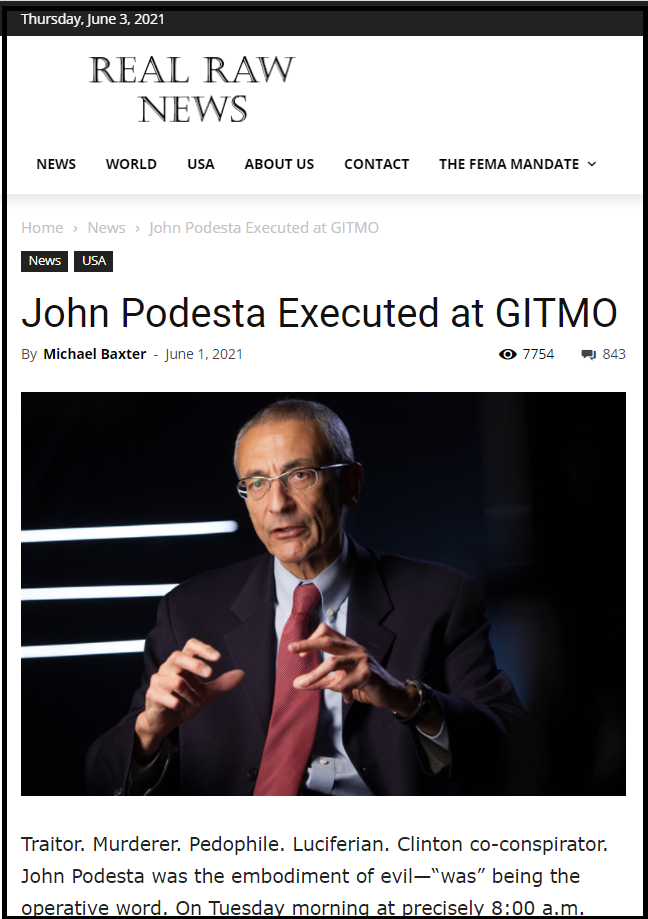 The live link to the article is:

Real Raw News has a disclaimer on its website that states it is not a legitimate news source.

The site describes itself as follows: "Information on this website is for informational and educational and entertainment purposes. This website contains humor, parody, and satire. We have included this disclaimer for our protection, on the advice on legal counsel."

Two hours earlier, military police had awoken Podesta and asked whether he wanted a final meal. A tearful and trembling Podesta reportedly refused a last repast, saying he had no appetite while whining about how Donald J. Trump and the U.S. military had convicted an innocent man.
Shackled at the wrists and ankles, Podesta was placed in a Humvee and driven to a clearing a kilometer southeast of Marine Hill, home to the fictional Lt. Col. Nathan R. Jessup in the film A Few Good Men.

And the article offered gruesome descriptions:

Rear Adm. Crandall addressed the firing squad: "When I give the command to fire, you're to fire your rifles simultaneously, center mass. The magazines on your rifles hold only one round each. You will chamber that round on the 'ready' command. One cartridge holds a blank. If any of you soldiers feel guilty afterward, just convince yourself that it was your rifle that fired the blank. Remember, you volunteered for this duty."
He gave the 'ready' command, and the Marines raised their rifles and chambered their single round of ammunition.
"Aim," Rear Adm. Crandall said.
The Marines drew a bead on Podesta's chest.
Podesta called out to God.
"Fire!" Rear Adm. Crandall ordered.
At once the six Marines discharged their weapons, and Podesta's perforated body slumped forward and collapsed to the ground. A physician present felt for a pulse and placed a stethoscope to Podesta's blood-stained chest, then declared him dead.

The Department of Defense, in an email to Lead Stories dated June 3, 2021, said the claim was "false."

Podesta has become the target of the "Pizzagate" QAnon conspiracy theory that he was part of a satanic pedophile ring that was sexually abusing and then eating children in the basement of a pizza parlor in Washington, D.C. Lead Stories has debunked that claim here.

Lead Stories previously debunked the claim that U.S. Special Forces arrested Podesta and sent him to the prison in Guantanamo Bay, Cuba here. "This did not happen," the Department of Defense told Lead Stories in an email dated April 5, 2021.

The Department of Defense has previously told Lead Stories that claims from the website regarding Hillary Clinton's arrest, trial and execution are "false."