Were two great white sharks found in the Mississippi River near Davenport, Iowa? No, that's not true: A shark expert says great whites could not tolerate being in freshwater. Also, the story was posted on a website that says its stories shouldn't be taken seriously. The site and similar sites have been used several times in the past to fool people with shark sightings hundreds of miles inland from the ocean.

The story originated from an article (archived here) where it was published by Breaking N! on October 20, 2021, under the title "SHARKS SPOTTED IN MISSISSIPPI RIVER NEAR DAVENPORT HAS BEEN CONFIRMED AS GREAT WHITE SHARK." It opened:

While it is not entirely impossible, it is incredibly uncommon for salt water dwelling creatures to stay for lengthy periods of time in fresh water. However, two Great White Sharks have managed to survive the trip and make their way up the Mississippi River somehow. Believed to have started as a mating couple, the two are assumed to have swam the 920 mile journey from the mouth of the Mississippi River that is connected to the Gulf Of Mexico. Officials in Davenport have contacted the Iowa Department of Natural Resources and will likely have a team in the river soon to capture the two lost sharks. 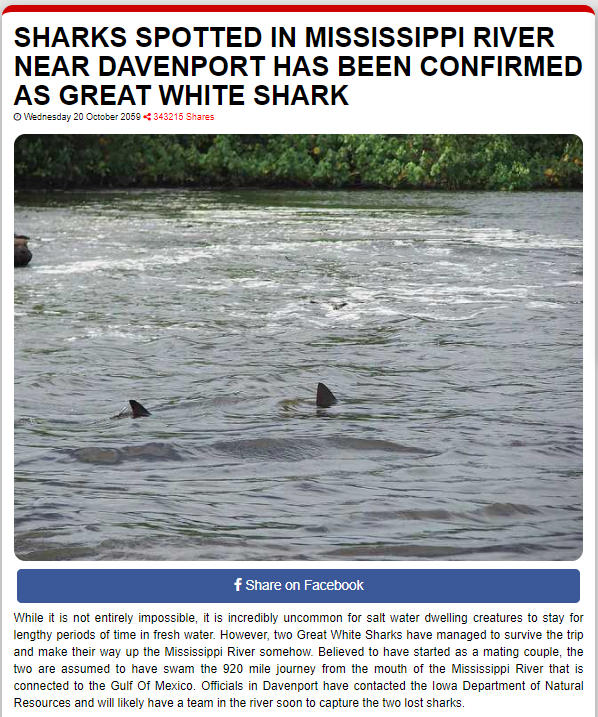 Lead Stories reached out to the Iowa Department of Natural Resources (DNR) and will update this fact check when they reply. Because the Mississippi River runs along the Illinois-Iowa border, we also contacted the Illinois DNR. "The Illinois Department of Natural Resources has received no reports of great white sharks in the Mississippi River," Illinois DNR communications director Jayette Bolinski wrote in an October 21, 2021 email to Lead stories.

A great white wouldn't be in freshwater. They couldn't tolerate those conditions.

The original photo dates to 2008 and can be found here on Flickr. The caption says "Bull Shark - Rio Sirena River Mouth." The Sirena River is located in Corcovado National Park in Costa Rica and flows into the Pacific Ocean.

Lowe said the sharks in the photo do appear to be bull sharks and could be found in those Costa Rican waters:

They can live in brackish waters.

Brackish waters are where fresh water and seawater meet, like at the mouth of a river and an ocean.

Breaking N!, the website where the story was published, carries a disclaimer that reads:

This website is an entertainment website, stories are created by users. These are humorous stories, fantasy, fictional, that should not be seriously taken or as a source of information.