Are sinister clowns coming to a city near you to purge and terrify everyone in sight? No, that's not true: It's a rerun of the same baseless clown threat that appeared in the fall of 2016. There was no evidence then that a clown purge would emerge on the night before Halloween (it didn't), and there is no evidence in 2021.

WARNING: Clowns are allegedly planning their own purge the night before Halloween. Stay inside, keep all pets inside and keep all doors and windows locked. Share this post to show awareness to family and friends and anyone else who doesn't really know about the clown purge spreading across towns and countries. Please keep yourself and others save by this post, thank you! 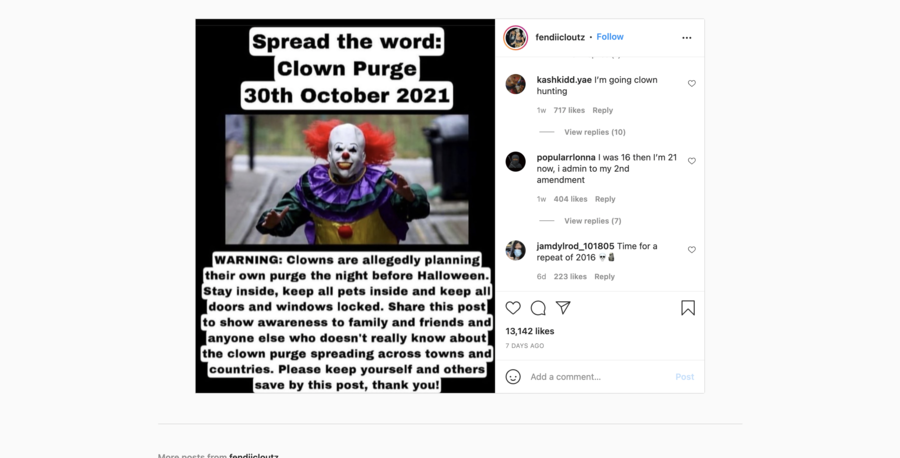 Snopes debunked this rumor in 2016 when the claim first appeared in the media. Snopes gave it a rating of false because there was no indication of any concrete details nor that law enforcement was paying any attention to it.

Vox's 2016 article titled, "The great clown panic of 2016 is a hoax. But the terrifying side of clowns is real," told readers that, "The clown hysteria seems to revolve around two nightmare scenarios. The first one is that a group of people dressed as clowns are preying on children. The second is that 'evil' clowns -- who seem to represent either people dressed as clowns or professionals who make it their job to dress as scary clowns (like this guy) -- are somehow straying outside their professional purview and creepily wandering the streets. But there is no evidence anywhere that either of these scenarios is actually occurring. There is no evidence that a ring of people dressed as clowns are preying on children. There is no evidence that 'evil' clowns exist and are currently taking to the streets."

A 2016 article from the Washington Post said, "The lack of police confirmation has cast doubt on the existence of these clowns. And if they are real, the reason for their existence is just as perplexing."