Did Germany, China and Slovenia begin charitable ad campaigns soliciting donations to help Americans suffering from food insecurity? No, that's not true: This was a real ad campaign that was announced in 2015, but it did not originate from outside the United States. The campaign, called "Great Nations Eat," was launched by an American public charity, "Share Our Strength," based in Washington, D.C., and was supported by several participating media companies.

The ad campaign was launched on June 24, 2015 and there was media coverage about it at the time. Over the years the ads have resurfaced on social media, sometimes presented as if they are overseas charitable campaigns to feed America's hungry. The videos surfaced again in November 2021. It is not clear if the people who have reshared the videos of the old campaign are playing along with the unconventional approach of the ads, or if they believe this campaign truly came from outside the U.S. One example is a video originally from TikTok that was posted on Facebook on November 7, 2021. It was captioned:

So GERMANY is collecting monies and showing advertisements too feed AMERICAN FAMILIES. It's true look: https://www.ispot.tv/.../great-nations-eat-germany-for...

The woman who introduces the video says:

I thought this was a joke. I thought someone was trolling me, but they're not. I had to go do my own research and I found the video. Brace yourself. 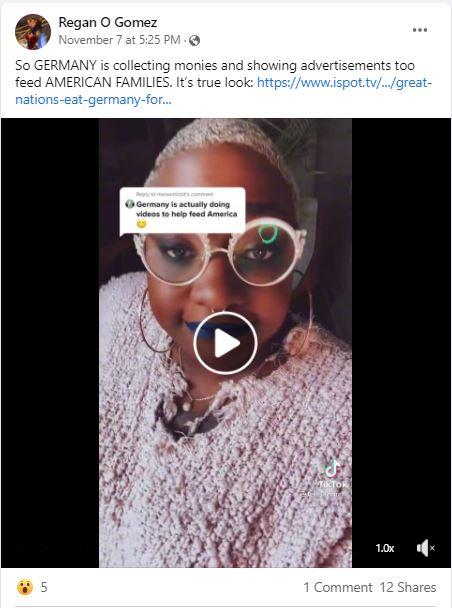 The ads can be viewed on adforum.com. The "Great Nations Eat" campaign included four ads: "Germany for America"; "China For America"; "Slovenia for America" and"We put a man on the moon." The ads were produced by the New York office of a creative agency with offices around the world, BBH (Bartle Bogle Hegarty). The actors deliver their message about hunger in America, each in the language of the corresponding country. English-language subtitles with white text on a black background add to the purposeful illusion that these commercials had not been designed for an American audience. 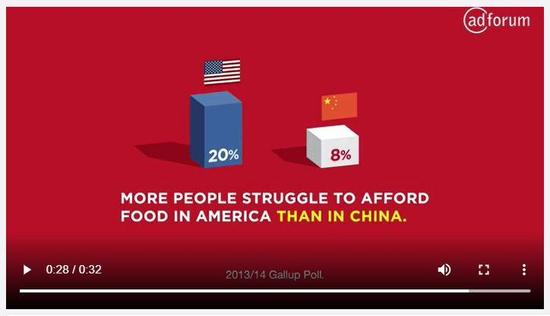 Lead Stories reached out to Share Our Strength by email for comment. Managing Director of Strategic Communications Laura Washburn responded with this statement on November 9, 2021:

Great Nations Eat was an advertising campaign managed by Share Our Strength, a U.S.-based anti-hunger nonprofit organization. The video circulating on social media was created in 2015 and was meant to be a parody, drawing attention to the problem of hunger in America, which our nation is unfortunately still tackling today. To get involved in our current campaign to end childhood hunger in America, visit NoKidHungry.org.

The CEO and Founder of Share Our Strength, Billy Shore, was quoted in a July 15, 2015 article in fastcompany.com:

This was really to try to think a little more disruptively to get people's attention, to go right to the heart of the issue that people are not aware hunger is a problem in the United States.

I'd say that historically there's been a genre of media around hunger that looks kind of alike - stories of kids in rural areas like Appalachia or Alabama. Those stories are important and compelling, but they all have the same kind of message. The idea was to do something different, and point out that America can't be great on an empty stomach - really tap into this notion that it has to do with our strength as a nation, as a people, as a society. It's not just about these children - as important as that is - but it really impacts all of us.

Since 2015, rates of food insecurity in America have been decreasing, but the coronavirus pandemic caused a jump in the projected statistics for 2020 shown in this graph from Feeding America's March 2021 analysis report, "The Impact of the Coronavirus on Food Insecurity in 2020 & 2021." Feeding America, a separate organization from Share Our Strength, is the nation's largest domestic hunger-relief organization. 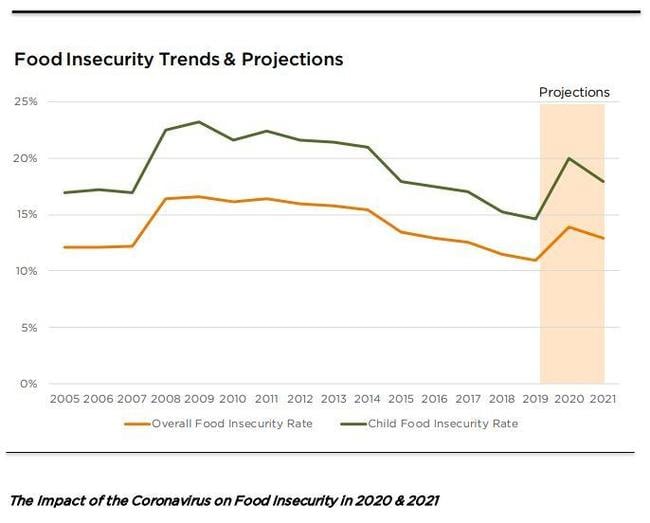