Did King Christian X of Denmark and his wife Alexandrine wear the yellow Star of David sewn on their clothing as an act of resistance against a Nazi rule, thereby encouraging all Danes to do this to protect Danish Jews -- and is this a photo of the King of Denmark and his wife? No, neither of these claims is true: King Christian X never wore a yellow star, and the Nazis never made a requirement for Jews in Denmark to wear the "Jewish badge." This badge was however a requirement in Budapest, Hungary, where this unidentified couple was photographed by Soviet photographer Yevgeny Khaldei in 1945, at the time of the liberation of the Budapest ghetto.

The myth about King Christian X of Denmark wearing a "yellow badge" is well-known and dates back to 1942, but there is a difference between what was written about things the king may have said he'd do, and what he actually did do. This well-known myth reappeared in a post published on Facebook on October 17, 2021. It was captioned:

The only Nazi occupied European country whose inhabitants were able to successfully resist the Holocaust was Denmark.
When the Nazis ordered Danish Jews to wear the star of David sewn on their clothes, the next day almost all Danes took to the streets with exactly the same stars.
After this event, the order "about the stars" was canceled.
Later, after learning of the Nazis ' plans to exterminate the Jews, members of the Danish resistance organized their transportation by sea to Sweden.
Only 120 Danish Jews died during the war.
Hundreds or even thousands of times less than in other European countries.
In the photo - king Christian X with his wife with the stars of David sewn on their clothes.
"Bear one another's burdens, and thus fulfill the law of Christ."
(Gal.6:2) 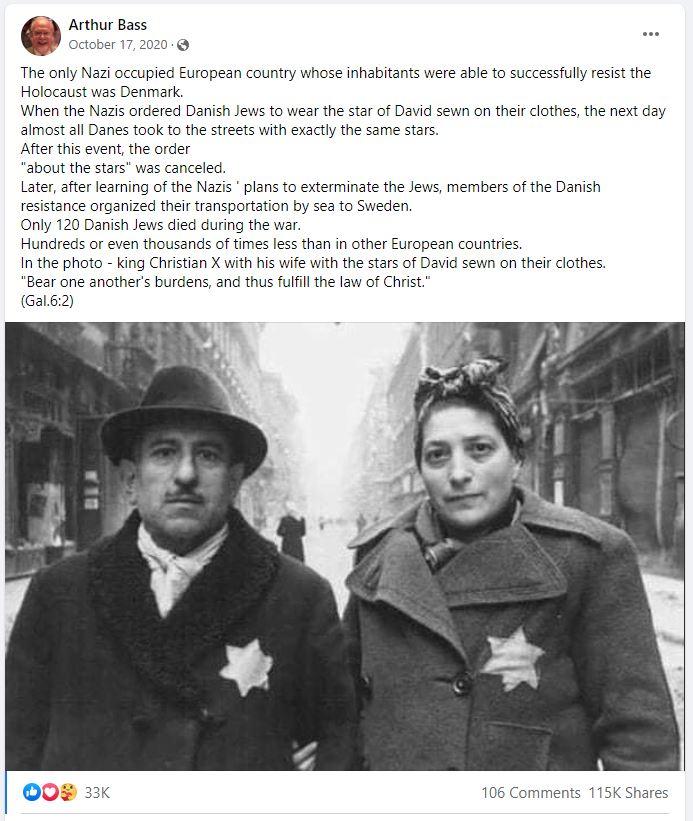 (Image source: Facebook Screenshot taken on Mon Nov 01 20:54:57 2021 UTC)
The origins of the myth about King Christian X of Denmark wearing a yellow Star of David may have started during the German occupation of Denmark, but if he ever promised to do this, he never had to. The Germans never made a rule that Jews in Denmark would have to wear a Jewish badge as they had in other countries. A fictionalized account appeared in the 1958 historical book, "Exodus" by Leon M. Uris which, according to the author, was based on a mixture of history and public record and entirely fictional characters. The passage in question in the book "Exodus" appears on page 72 (an online copy can be borrowed at archive.org) reads:

From German occupation headquarters at the Hotel D'Angleterre came the decree: ALL JEWS MUST WEAR A YELLOW ARM BAND WITH A STAR OF DAVID.
That night the underground radio transmitted a message to all the Danes. "From Amalienborg Palace King Christian has given the following answer to the German command that Jews must wear the Star of David. The King has said that one Dane is exactly the same as the next Dane. He himself will wear the first Star of David and he expects that every loyal Dane will do the same."
The following day the Germans rescinded the order.

In a chapter in the 2003 report "Denmark and the Holocaust" titled, "The King and the Star: Myths created during the Occupation of Denmark" (on page 104 - 106) the first appearance of the story is identified as a September 4, 1942, news release from The Jewish Telegraphic Agency. It reads in part:

When the King was told the Germans were going to press for the introduction of the Yellow Badge for Jews, he declared: "When this happens, I shall wear the Yellow Star on my uniform in public and I shall order the entire Royal household to follow my example."

The United States Holocaust Memorial Museum (USHMM) mentions the fictional legend of the Yellow Star on a page about King Christian X of Denmark, and on a separate page dedicated to the Jewish population of Denmark it states that there were about 7,500 Jews in Denmark in 1940. This Facebook post states that only 120 Danish Jews died during the war, and that matches the number given in the USHMM article, concluding:

In total, some 120 Danish Jews died during the Holocaust, either in Theresienstadt or during the flight from Denmark. This relatively small number represents one of the highest Jewish survival rates for any German-occupied European country.

The post on Facebook finishes by misidentifying the people in a famous photograph as King Christian X and his wife. The photo is, without question, not the King of Denmark and his wife Alexandrine. He was considerably taller than she, and at this point in time was in his mid-70s, she was in her mid-60s. The photo of this couple was taken in Budapest in 1945 by Soviet photographer Yevgeny Khaldei. The photo's title usually identifies this as being the Budapest Ghetto. Lead Stories was not able to identify the couple, but did identify Rádai Street in Budapest, which matches the 1945 photo to a modern 2017 Google Streetview image shown below. (Image will open larger in a new tab. This location is a few blocks away from true boundaries of the once-fenced and walled ghetto. 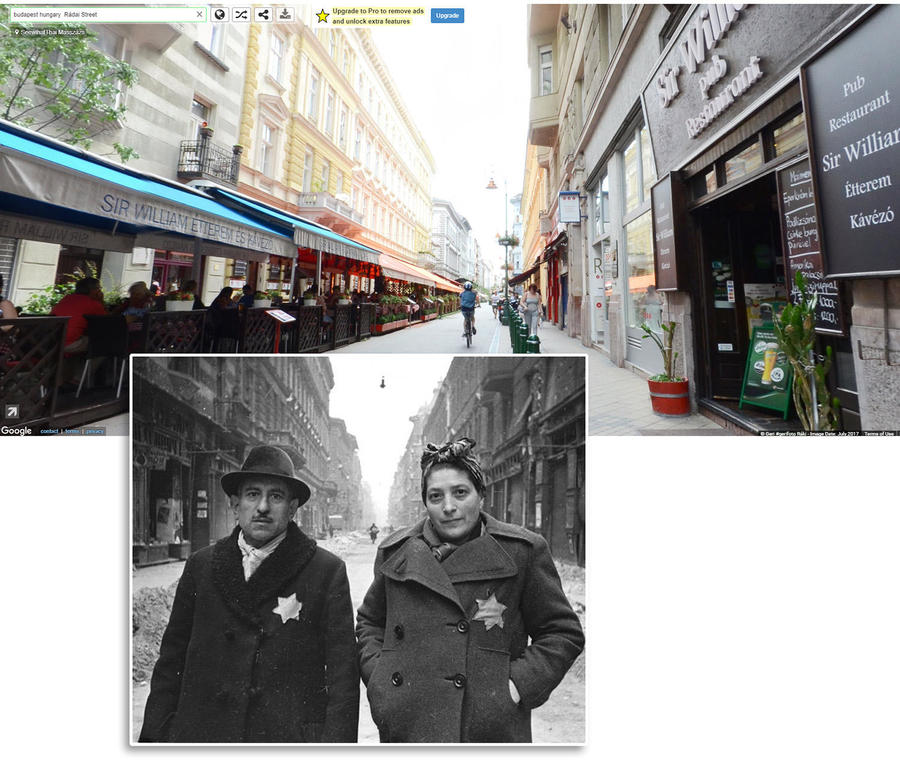