Did Merriam-Webster change its definition of "vaccine" and remove a previous portion that mentioned "immunity" due to the controversy over COVID-19 vaccines? No, that's not true: Although Merriam-Webster did update its long-held definition of "vaccine," the portion alluding to immunity was not removed, it was reworded. Contrary to what is claimed, COVID vaccines are used, by medical professionals, to build patients' immunity.

Vaccine used to be defined as a substances that provides 'immunity' to a specific disease. Now, Merriam Webster has literally changed the definition of 'vaccine' and removed the 'immunity' portion in order to possibly cover for the fact that the Covid 'vaccines' don't actually provide immunity from Covid.

Merriam-Webster maintained part of the same definition of "vaccine" for some time. This snapshot from February 12, 2006, shows the first version of the definition that was archived using the Wayback Machine. The definition is reproduced below:

1 : matter or a preparation containing the virus of cowpox in a form used for vaccination
2 : a preparation of killed microorganisms, living attenuated organisms, or living fully virulent organisms that is administered to produce or artificially increase immunity to a particular disease

Later, the second meaning of "vaccine" shown above was the only definition used for the word, as shown in this Wayback Machine snapshot from January 18, 2021.

This snapshot from January 26, 2021, shows that Merriam-Webster made changes to the definition. A screenshot is included below: 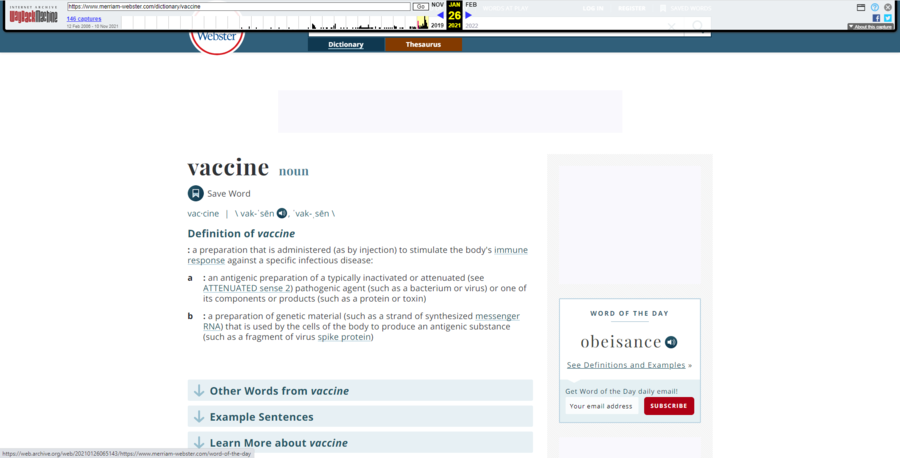 This is the expanded Merriam-Webster definition of "vaccine" (archived here) at the time of writing:

As evidenced in the January 26, 2021, and November 11, 2021, screenshots, the concept of "immunity" in relation to the definition of "vaccine" was updated to describe an "immune response" instead. Merriam-Webster's definition of "immunity" (archived here) at the time of writing is shown in the screenshot below:

At the time of writing, Merriam-Webster's definition of "immune response" (archived here) is:

So, while "immunity" refers to a particular ability or state of being, "immune response" describes the actions occurring in the body that may lead the body to increased immunity. The inclusion of the phrase "a preparation that is administered (as by injection) to stimulate the body's immune response against a specific infectious agent or disease" in the newest definition of "vaccine" is a more detailed explanation of what a vaccine does. The examples provided by Merriam-Webster in the newest definition of "vaccine" serve to demystify the science behind mRNA vaccines, which were widely released for public use during the global COVID-19 pandemic.

Merriam-Webster has stated that it includes and revises the definitions of certain words in its dictionaries based on a word's usage in culture. It also uses citational evidence, such as the evidence in the newest definition of "vaccine," to develop its definitions. According to an article from Merriam-Webster titled "How does a word get into a Merriam-Webster dictionary?":

Change and variation are as natural in language as they are in other areas of human life and Merriam-Webster reference works must reflect that fact. By relying on citational evidence, we hope to keep our publications grounded in the details of current usage so they can calmly and dispassionately offer information about modern English. That way, our references can speak with authority without being authoritarian.

Lead Stories reached out to Merriam-Webster's editorial team about the claim and will update this story with any relevant response.

You can find all of Lead Stories' coronavirus-related coverage here.