Did a nurse named Tiffany Dover die at a Chattanooga, Tennessee, hospital on December 17, 2020, the day she received a COVID-19 vaccine and subsequently fainted while live on camera speaking with a local TV station? And is an Ancestry.com entry for Tiffany Pontes in Alabama proof that Tiffany Dover of Tennessee is dead? No, that's not true: Dover, who did not lose consciousness during her post-vaccination episode, recovered almost immediately from the fainting spell caused by an overactive vagal response to pain. When multiple rumors began to spread on social media, both Dover and the hospital made public comments about the incident to reassure concerned people that she was alive and well.

Despite being debunked at the time, rumors about Dover have continued to surface, not just in the United States but internationally. One example is a video (archived here) that was posted in the group, "Riccardo Bosi & Australia One Fan Page (PUBLIC GROUP)" on October 21, 2021. It was captioned: 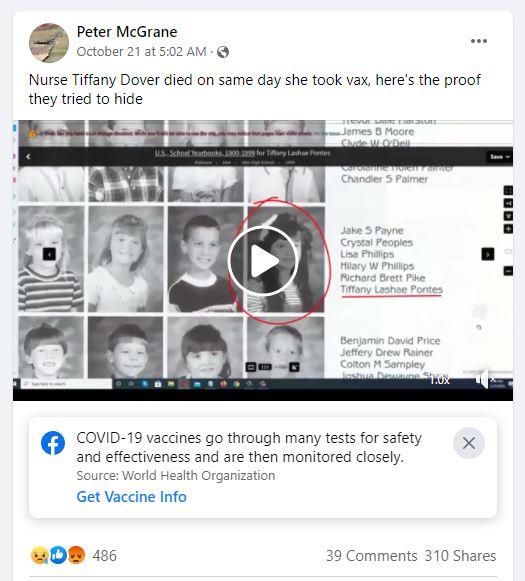 The video begins with captioning that says:

Tiffany Dover is Dead
These screen recordings were taken on ancestry.com on December 25, 2020

The video shows the process of navigating through the Ancestry.com system to see the entry for a woman in Alabama named Tiffany Lashae Pontes. It shows school yearbook pictures for a child by that name. Later in the video the entry shows details for a husband, Dustin Dover and notation that his wife Tiffany died in 2020 in Alabama. There is a Facebook account of a woman by this name.

The public-facing posts of the Alabama woman's Facebook account are full of comments from conspiracists who believe that there is only one Tiffany Dover and that she is dead. A photo posted to that Facebook profile in 2019 appears at the end of this video captioned, "Tiffany Lashae Pontes Dover 1990-2020."

However, these two women with the same name, Tiffany Dover, one in Alabama and one in Tennessee, are not the same person and neither of them died after receiving a COVID vaccine in December 2020. 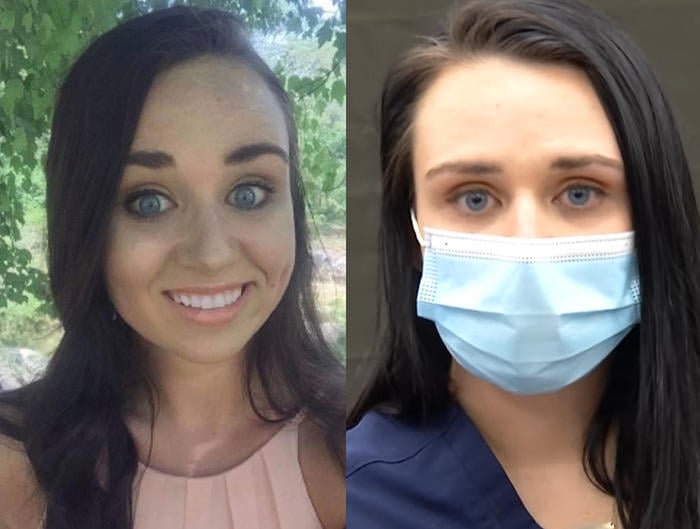 A fact-checking article published by reuters.com on January 1, 2021, and updated on January 4 was titled, "Fact check: Nurse who fainted after COVID-19 vaccine did not die." The article also addresses the Ancestry.com aspect of this hoax. Ancestry.com is not an official database of public records:

An Ancestry spokesperson confirmed to Reuters via email that details entered for an individual 'don't need to be backed up or supported by official sources' and are not verified by Ancestry, but are 'entered at the tree owners discretion.'

There were already false rumors about an unnamed nurse in Alabama who purportedly died after receiving a COVID vaccine on December 15, 2020 -- this was even before the nurse Dover was vaccinated at CHI (Catholic Health Initiatives) Memorial Hospital in Chattanooga. The Alabama Public Health Department issued a press release on December 16, 2020, that made it clear that no nurse, or any other vaccine recipient in Alabama, had died:

The Alabama Department of Public Health (ADPH) has reached out to all hospitals in the state which administered the COVID-19 vaccine and confirmed there have been no deaths of vaccine recipients.

The day Nurse Dover fainted in front of the news cameras of Chattanooga station WRCB, she recovered soon after, and did a brief interview explaining what caused the syncopal episode. This was posted the next day, December 18, 2020, on the station's YouTube channel. She said that even pain from a hangnail or stubbing her toe could cause her to pass out.

On December 30, 2020, WRCB revisited the topic to post its own fact check, "Fact Check: CHI Memorial nurse who fainted after getting COVID-19 vaccine is 'doing fine.'" This fact check includes a video that was posted on December 21, 2020, by the hospital showing staff gathered together in support of Nurse Dover. This video was mentioned in a statement released by the hospital and posted to their social media account but then later removed.

We appreciate the ongoing concern by the community and media. Tiffany and CHI Memorial issued a current video and photograph , on Dec. 21, 2020, of her at the hospital surrounded by nursing leaders, including our Chief Nurse Executive, who support her. Our efforts must now turn to caring for an ever growing number of people in our community hospitalized with COVID-19 and vaccinating our caregivers and support staff. We will not be putting out any additional statements or holding any additional interviews concerning this incident. For concerns related to the vaccine, we recommend you speak with your physician or visit www.cdc.gov and https://www.cdc.gov/coronavirus/2019-ncov/vaccines/faq.html.

Lead Stories has debunked rumors about Dover in December 2020. One article explained that the syncopal episode was not caused by a vaccine ingredient, and another addressed death rumors.