Did a scene between a passenger, flight attendant and airline captain erupt on a plane about the passenger not wanting to sit next to someone who had not been vaccinated? No, that's not true: The scene was staged and filmed, and listed on Internet Movie Database (IMDb). Both the passenger and the captain are actors who have profiles on IMDb as well.

The claim appeared in a Facebook post (archived here) where it was posted by Prince Ea on November 1, 2021 with the title "SHE MUST HAVE BEEN HAVING A BAD DAY 😱😱". The video opened with a woman in blue arguing with a flight attendant:

I'm not sitting here. It's not safe. Do you understand? 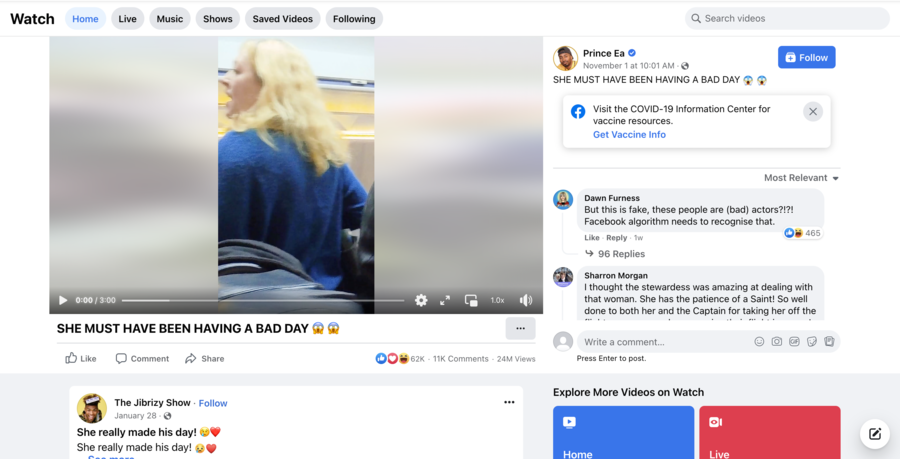 Although the video was drawing comments online as though it was a real scene, this was not a random encounter. This short film is titled "Covid Flight." The release date was November 1, 2021. Prince Ea, the account that posted the video on Facebook, is the executive director of "Covid Flight." The passenger and the captain are actors with accounts on IMDb.

The video continues for three minutes, which is a common characteristic of these skit videos, as they then qualify for Facebook ad revenue.

Essentially, the "passenger" character does not want to sit in her seat because her seatmate cannot show her his vaccination card. The "flight attendant" character is assuring the upset passenger that her life is not in any danger and there is no way for her to change seats because it's a full flight. The "captain" character soon steps in, tells the passenger that discimination based on vaccination status is not OK, and kicks her off the plane.

Lead Stories reported in May, 2021 that many active Facebook creators make three-minute long videos in order to create revenue via ads. Facebook's monetization program will allow some content creators to make money from ads shown along with their content. Not all content qualifies. A creator needs to be popular and have a large audience. Two of the requirements for eligibility for "in-stream" ads listed on the Facebook for Business lessons mention three-minute long videos, stating: "Have 30,000+ 1-minute views" and "In the last 60 days, you need to have had at least 30,000 one-minute views on videos that are at least three minutes long."

Executive producer is Richard Williams aka @PrinceEa who also posted it on Facebook https://t.co/zFDTnZl7g8