The claim appeared in a Facebook post (archived here) published on November 3, 2021. The post featured several videos and images of trash cans outside the Gloucester County Office of Elections in West Deptford, New Jersey. The cans were filled with what the videos' narrator alleged were unmarked ballots and shredded mail-in ballots. The caption of the post reads:

Breaking News out of West Deptford NJ:
Trash bins discovered outside the Gloucester County Board Of Elections containing blank ballots as well as bags of shredded ballots from Tuesday's election! Local Police, the Sheriff's office and Project Veritas reporters responded! 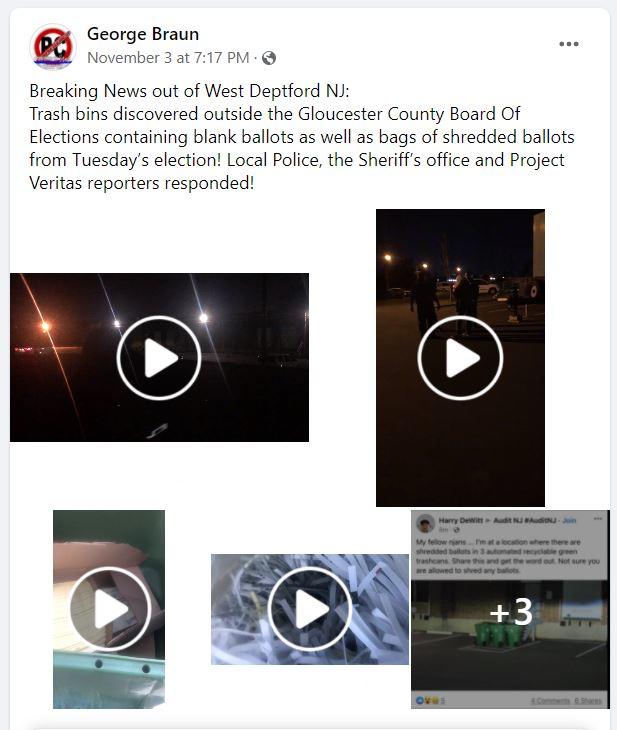 Mike Sauter, chief of staff for the Gloucester County Clerk's Office, forwarded Lead Stories a statement from the office via email on November 5, 2021. The statement read:

This office was contacted by the Gloucester County Prosecutor's Office in regard to an investigation against several individuals that were shown on a social media video rummaging through recycling containers outside of the Gloucester County Office of Elections on the evening of November 3, 2021. These individuals were incorrectly claiming election fraud. The materials in the recycling containers were not viable for any electoral use.

The Gloucester County Clerk's Office states, on November 3, 2021, staff members put the following items into sealed boxes and placed them in the recycling containers:

These items have no viable election use and were discarded in accordance with the law.

Lead Stories initially contacted the West Deptford Police Department, and we were told that the department's officers were only involved in the case until they turned it over to the Gloucester County Prosecutor's Office, as indicated in the County Clerk's Office statement. We also reached out to the Gloucester County Prosecutor's Office directly and will update this story with any responses.