Did a 91-year-old woman find out that she had been pregnant for 60 years when she visited the doctor? Yes and no: the story of the rare health condition of an elderly woman from La Boca, Chile is true, but it is presented in a misleading way. In June 2015 the story about the very rare calcified fetus (or lithopedion) found in Estela Meléndez' abdomen was reported around the world. Also in 2015, but completely unrelatedly, someone posted a photo of their 101-year-old grandmother, Rosa Camfield from Arizona, holding her great-granddaughter. Photos of these two women appear alongside each other, giving the impression that the large lump Meléndez had carried in her abdomen for more than half a century resulted in the birth of a live baby. It did not.

The true story of Meléndez' calcified fetus was reported by many outlets (here, here and here) in the summer of 2015, and the picture of great-grandmother Rosa Camfield was posted on Reddit on March 18, 2015. A post with images of the two women was published by the Facebook page Country Music Videos on December 7, 2021. It was captioned: 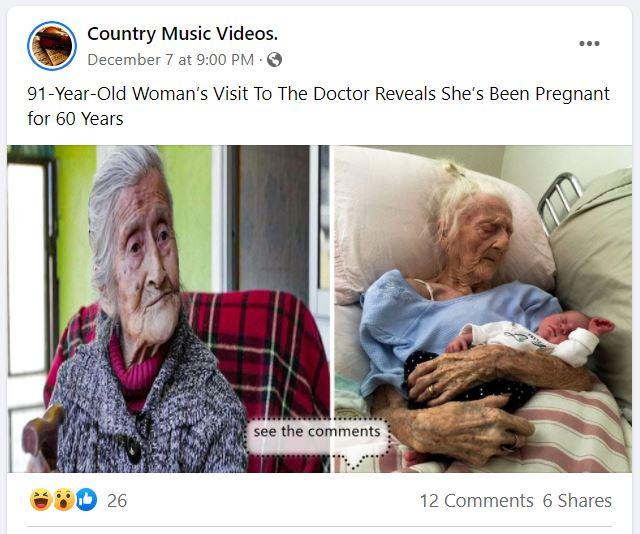 Camfield passed away at 101, just two weeks after the photo was taken with her great-grandchild. The dailymail.co.uk website published an in-depth article about her.

This Facebook post is not the only instance where the image or story of Meléndez has been misleadingly combined with the image of Camfield with her great-grandchild. Along with being combined with the story of the lithopedion discovery in Chile, Camfield's photo also was the foundation for a fake news story titled, "101-YEAR-OLD WOMAN GIVES BIRTH AFTER SUCCESSFUL OVARY TRANSPLANT" published by World News Daily Report. That story was debunked by Snopes on March 30, 2016.

Meléndez's condition was discovered when she went to the doctor after suffering a fall. An unusual mass was discovered with a pelvic X-ray and an additional scan was ordered (video in English, video in Spanish, here, here and here). This mass was a calcified fetus, known as a lithopedion, which had been in her abdomen for over 60 years.

There are only a few hundred known cases of "stone babies." The case of a Moroccan woman, Zahra Aboutalib, discovered in 2001, was made into a documentary. Another case discovered in a geriatric patient in Brazil was featured in a 2018 case study which described the condition:

Lithopedion (lithos = rock and paidion = child) is a rare condition that only occurs in 1.5 to 1.8% of extrauterine pregnancies and in 0.00045% of all pregnancies. It consists of an ectopic pregnancy in which the fetus dies but cannot be reabsorbed by the mother's body, which then coats it in a calcium-rich substance.

The reporting on this story sometimes suggests that Meléndez was living with this mass without noticing it. There is a part of her medical history that is not fully explained. According to her younger brother Luis, this calcified mass created considerable discomfort for his sister. In a bbc.com/mundo article, he said that in the 1980s Meléndez had abdominal surgery at Claudio Vicuña hospital for what she was told was cancer. At that time Meléndez was not told about the calcified fetus and it was not removed. Her brother thinks that the doctors have known about this all along but chose not to do anything about it.

Most of the reporting contains an image showing how the calcified fetus was positioned in Meléndez's abdomen. This image is not an X-ray or a CT scan, but a computer-generated reconstruction made from a real CT scan. 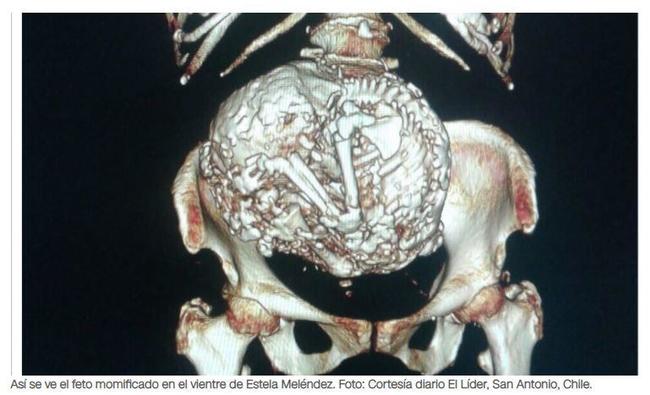