Do "few people in the US know about the Bhopal disaster," which happened in 1984 and resulted in thousands of deaths in India? No, that's not true: American news media produced extensive coverage when this event happened. The official death toll for the Bhopal event -- a deadly gas leak at an industrial site -- was more than 5,000 people with 500,000 people poisoned. The effects of that poisoning in Bhopal will continue to have disastrous effects for those affected, according to experts, and the aftermath of the tragedy continues to be the topic of articles and analysis.

Everyone knows about the Chernobyl disaster, which killed less than 100 people in 1986.

Few in the US know about the Bhopal disaster, when the American company, Union Carbide corporation KILLED 16,000 PEOPLE and nonfatally poisoned 500,000 more in 1984.

Because capitalist propaganda is effective 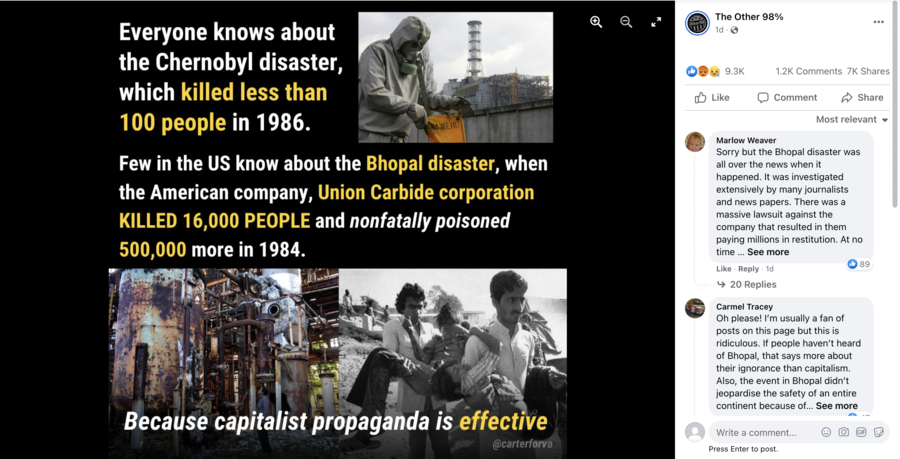 The Facebook post claims that few people in the United States know about the 1984 gas leak in Bhopal. However, major U.S. news outlets including The New York Times and NBC News reported on the event shortly after the December 3, 1984, gas leak. Major news organizations including The Associated Press, CNN, The New York Times, The Guardian and The Atlantic, continued to write about the disaster in the decades afterwards including as recently as 2020.

The post mentions two disasters -- Bhopal and the 1986 Chernobyl nuclear accident in Ukraine. Both events received extensive worldwide media coverage when they happened, and both have remained in the news periodically.

Lead Stories emailed the Nuclear Energy Institute (NEI) concerning the Chernobyl accident. An NEI spokesperson responded on December 21, 2021, with a fact sheet titled, "Chernobyl Accident and Its Consequences." The fact sheet stated that 31 people died within a few weeks of the accident, either from the initial steam explosion or exposure to radiation and thermal burns, and one died from cardiac arrest.

The United Nations created a report in 2005 in which more than 100 scientists concluded that 4,000 people could eventually die from the radiation exposure from the 1986 disaster.

Per a Reuters article from 2020, more than 5,000 people died in the 1984 Bhopal event and 500,000 were poisoned. However, the effects of the gas leak could have disastrous consequences for the citizens of Bhopal in the future, including, but not limited to, the COVID-19 death rate of the survivors being 6.5 times higher than people who were not affected.