Is there a legitimate movement made up of people trying to raise awareness that birds are not real but are actually government spy drones that charge on power lines and drop tracking devices on cars? No. This parody movement is supported and perpetuated by people who are in on the joke. "Birds Aren't Real" is not real. The satirical "bird truther" movement was created by Peter McIndoe in 2017. For years McIndoe played the role of a true believer but has recently gone public with the news that the movement he started was a joke, or as he once hinted in an interview with Newsweek, a "meta-conspiracy parody-movement, showcasing post-truth-era absurdity."

The "Birds Aren't Real" movement has a website and a YouTube channel. The movement does not only exist online. Adherents have paid for billboards; "believers" stage protests and put up flyers, and McIndoe also had been traveling around the country in a Birds Aren't Real van. Photos of the van being hauled on a trailer appear in a post published on November 20, 2021. Its caption includes a link to a music video:

zoom in on the facts

these aren't the same birds we grew up with! https://youtu.be/oHd-bfsQ2TQ 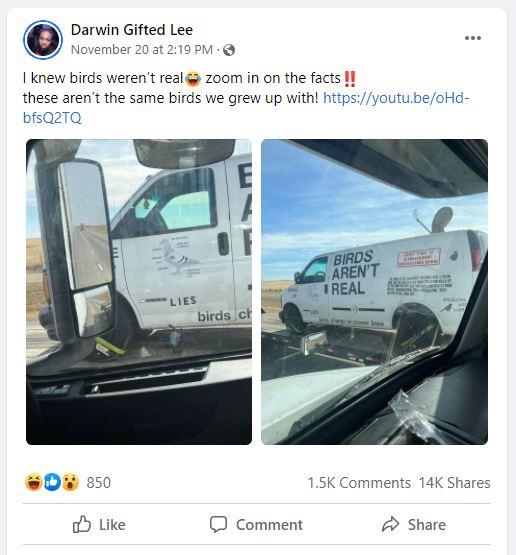 An October 12, 2021, article in newstatesman.com is titled, "Birds aren't real and this man wants the world to know The Birds Aren't Real movement is a combination of post-truth satire and Gen-Z s**tposting. But is Peter McIndoe on the verge of taking things too far?" The interview was conducted by way of a Zoom call from the van McIndoe was living in while on tour. McIndoe was still playing the part of a true believer, but the article describes the movement this way:

At its heart, Birds Aren't Real is a delicate mix of post-truth satire and s**tposting; just plausible enough to get media attention, but ironic enough to attract a cult following among the young and online - all of them happy to be in on the joke.

On November 12, 2021, a protest photo from outside Twitter's headquarters in San Francisco was posted to the @birdsarentreal Instagram account with the caption:

History has been made. Our march on Twitter was a massive success. Big thanks to Jack Dorsey for the support, and everyone who was able to make it out. The logo should be changed any day now. Down with big tech, down with big bird. 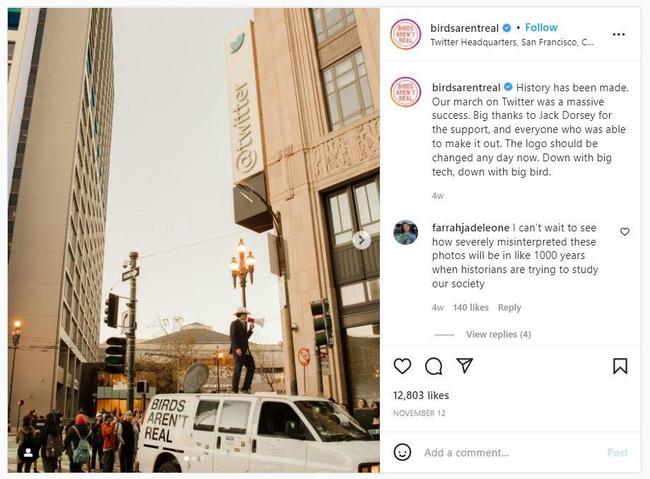 Yesterday our beloved van broke down in Arizona, barely a week after the Twitter rally- like a loyal steed collapsing after it's fulfilled its purpose. We do not believe this to be an accident and have launched a formal investigation. Rallies will be put on hold while we fix the van up. Please send love & health to our sweet duchess ♥️♥️♥️

In a December 9, 2021, nytimes.com article titled, "Birds Aren't Real, or Are They? Inside a Gen Z Conspiracy Theory. Peter McIndoe, the 23-year-old creator of the viral Birds Aren't Real movement, is ready to reveal what the effort is really about," McIndoe was forthcoming about the origins of the parody social movement and what it means to him and other people:

It's a safe space for people to come together and process the conspiracy takeover of America. It's a way to laugh at the madness rather than be overcome by it.

Peter McIndoe was raised in a Christian fundamentalist family, homeschooled in the rural south, and marinated in conspiracies. "Birds Aren't Real is not a shallow satire of conspiracies from the outside, it is from the deep inside," he said https://t.co/Qy8XcbcXkC