Is the story of a man scamming visitors by posing as a parking lot attendant at the Bristol Zoo Gardens in Bristol, England, real? No, that's not true: The claim about a man who pretended to be a parking attendant for 25 years at the Bristol Zoo Gardens to steal money from visitors is an urban legend that has been recycled since at least 2009 and has been previously debunked. The chairperson of a local environmental coalition and a retired employee of the Bristol City Council confirms that the story remains "a nice story but just an urban myth." The Bristol City Council's parks supervisor told Lead Stories he has "zero evidence or recognition of the validity of this story."

The claim appeared in a Facebook post (archived here) on December 6, 2021. Beside the photo of a man standing in a parking lot, wearing a bright yellow safety vest that reads "BRISTOL ZOO," the caption is:

Outside Bristol Zoo there is a parking lot for 150 cars and 8 buses. For 25 years, its parking fees were managed by a very pleasant attendant. The fees were $1 for cars,$5 for buses.

Then, one day, after 25 solid years of never missing a day of work, he just didn't show up. The Zoo Management called the City Council and asked to send them another parking agent.

The Council did some research and replied that the parking lot was the Zoo's own responsibility. The Zoo advised the Council that the attendant was a City employee. The City Council responded that the lot attendant had never been on the City payroll. 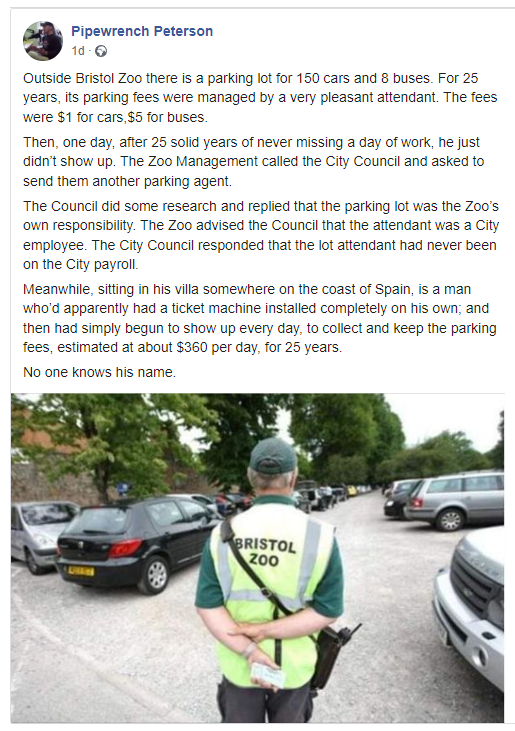 Meanwhile, sitting in his villa somewhere on the coast of Spain, is a man who'd apparently had a ticket machine installed completely on his own; and then had simply begun to show up every day, to collect and keep the parking fees, estimated at about $360 per day, for 25 years.

No one knows his name.

Snopes.com debunked this same claim over a decade ago in 2009 in a post titled, "Phony Carpark Attendant Collects Parking Fees." It wrote that the assertions that a clever robber conned visitors of a zoo out of "hundreds of thousands of pounds" over 25 years by pretending to be a parking attendant, pitting the zoo and the city against one another, and ultimately retiring as a wealthy person were unsubstantiated. The article identified various publications where different variations of the scam appeared -- one as early as 2007. One stated the man worked for 23 years instead of 25. The claim was similar: The man was not on the payroll of either the zoo or the city council:

Meanwhile, sitting in his villa somewhere on the coast of Spain or France or Italy is a man who'd apparently had a ticket machine installed completely on his own and then had simply begun to show up every day, commencing to collect and keep the parking fees, estimated at about $560 per day -- for 25 years.

A June 15, 2009, Bristol Live article displays the same photo as the current post, which shows the back of a man wearing a bright yellow vest that reads "Bristol Zoo." Like Snopes, it concludes the story is an urban myth:

Bristol Zoo insists there has never been any confusion over parking attendants and says it has several attendants and more than one car park - none open to coaches.

A version of the story did appear in the Evening Post two years ago - in a feature on urban myths published to coincide with April Fools' Day.

A little over a decade later, a January 29, 2021, Bristol Live article suggests that there may be some truth to the urban myth, as Susan Carter of the Downs for People coalition states:

For almost thirty years, from 1958 until the mid-1980s, and quite likely for 30 years before that, people were able to make their living as parking attendants, collecting 'voluntary' donations from motorists parking on rough ground outside the zoo.

It is unlikely that anyone made a fortune, and from 1958 onwards attendants were authorised either by the Downs Committee or, from 1983, the zoo (probably - that is when confusion may have arisen).

We emailed Robert Westlake, the chairperson of the Friends of the Downs and Avon Gorge organization and a retired employee of the Bristol City Council, to comment on this claim. Friends of the Downs collaborates with the zoo and has also pushed back against zoo visitors parking on the downs, a grassland. He told us on December 11, 2021:

I can confirm that there has never been any evidence that this ever took place. Based on that I confirm that it remains a nice story but just an urban myth.

I am aware of this and have heard it quoted over the years.

I have zero evidence or recognition of the validity of this story.

The Bristol Zoo Gardens website currently states that there are parking fees to adhere to, which parking wardens monitor, and that they expect to move the zoo to a new location on the northern edge of Bristol by 2024.