Does this post lead to an article about some type of legal issue concerning an actor? Did the actor lend their name and endorsement to a brand of CBD gummies as "the ultimate pain relief solution"? No, that's not true: This clickbait teaser does not deliver the article that is promised, but to a deceptive website spoofing NBC News. The fabricated news story is about the actor endorsing a CBD gummy product. There is no record of NBC News reporting on this topic except an article about actor Tom Hanks speaking out to expose a scam that was falsely using his name.

Fake ads featuring bogus celebrity endorsements have been reported for years, gaining media attention in 2019 when Facebook filed suit against a Hong Kong company, ILikeAd, for complex ad fraud practices that included fake celebrity endorsements and cloaking. One example of another ad campaign with a false celebrity sponsor begins with an ad published by the Facebook page "TROPA" on December 1, 2021, with the caption, "M.Harmon Pulled From Future Projects Until Situation Clears Up." It appears to link to an article titled, "Awaiting Court-Decision" but the name of the website is fringedshoulderbag.net 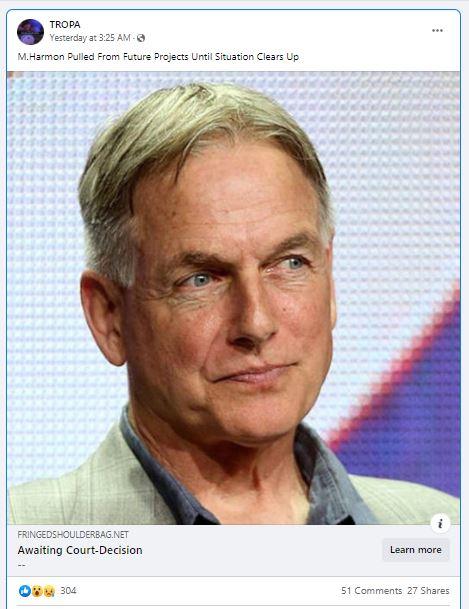 If a viewer clicks on this link they will be taken to a webpage at the fringedshoulderbag.net domain, which looks like a NBC News article. The article claims that Mark Harmon's legal troubles are coming from the pharmaceutical industry. This scenario is identical to one reported by thewrap.com on July 22, 2020: "Clint Eastwood Sues CBD Retailers Over Endorsements He Says Are Fake." Eastwood shared screenshots of a headline he called demonstrably untrue, "Big Pharma In Outrage Over Clint Eastwood's CBD: [Name of CBD Product] - He Fires Back With This!"

This bogus dynamic is repeated in this fake NBC article featuring Mark Harmon's name and photos:

Critically acclaimed actor, Mark Harmon, is trending all over social media for having brought what he calls, 'the ultimate pain-relief solution' to market last week. Pharmaceutical industry titans were fuming saying they will be taking Mark Harmon to court for undercutting their prices and making it easily affordable to the public. Mark Harmon gave the following statement in response to their claims:

'These so-called "pharmaceutical industry leaders" have no right to take me to court. They have been overcharging the general population for years, simply because they are greedy and wish to fill their pockets with money. Instead of doing what's best for the American people, they feed off of people in need and sell medications at a price that is five-times more expensive than what it costs to produce them. It's time we put an end to this. This is why I've decided to bring Fun Drops CBD Gummies to market and make it easily affordable to millions of people that suffer from either physical or emotional pain. I vouch for the effectiveness of Fun Drops CBD Gummies, as it can truly help individuals manage their afflictions. 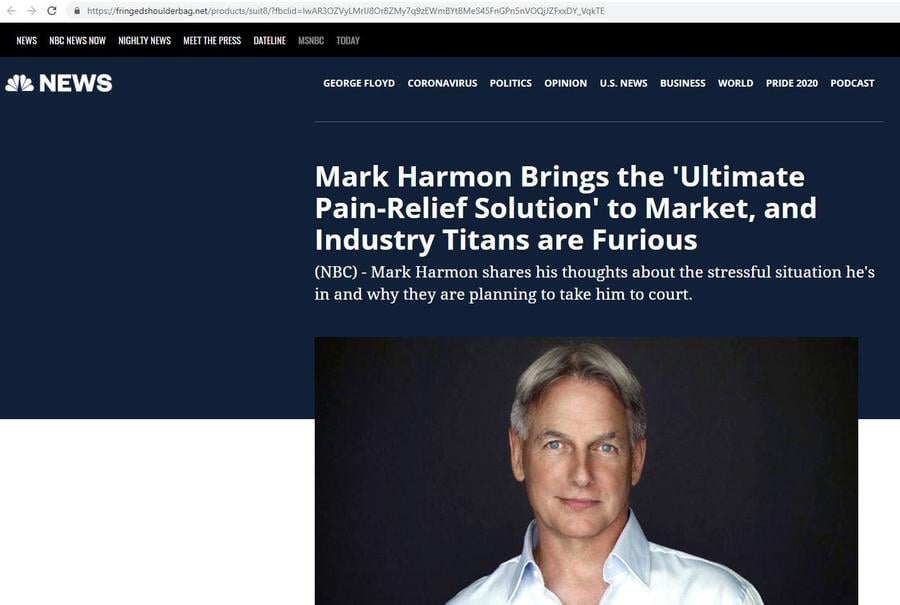 The Facebook page TROPA is running two ads on Facebook. They both carry the same link to a spoof NBC News article on fringedshoulderbag.net. One ad will load an article with links to Kushly CBD Gummies. Navigating to the same place from the other ad, the links point to the webpage of a different brand called Fun Drops CBD Gummies. The first part of the link (fringedshoulderbag.net/products/suit8) is the same, but the tracking information added by Facebook after the "/?fbclid" part of the URL is being used to cloak the page and load links that point to the alternate product's websites. Some of the reviews on the Kushlynation.com website were clearly fake, utilizing computer-generated photos of "people who do not exist."

If a user navigates to the fringedshoulderbag.net website from Facebook by clicking on the TROPA ad, the spoof NBC News article will be shown to them, but if they try to access the website otherwise, the page that loads is for wedding tuxedos (also purportedly endorsed by Mark Harmon). This is called cloaking. Matt Cutts from Google explains the risks of cloaking in this video.

Another series of ads running on Facebook feature a photo of Baptist minister Charles Stanley with a clickbait headline, "Charles Under Alarming Allegations." These ad links point to many different websites and load a spoofed Fox News article. These articles, like the ones featuring Harmon, have the same false narrative that pharmaceutical companies are trying to sue Stanley and shut down his CBD business. On June 8, 2021, christianitytoday.com published an article "Charles Stanley: Not Selling CBD," which included a link to a scam alert issued by the staff at In Touch Ministries.

A search of the Better Business Bureau for Kushly shows an Arizona business, Kushly Industries LLC, which settled a complaint by the Federal Trade Commission on July 6, 2021, for making unsupported health claims for CBD products. The contact information listed on Kushlynation.com is not in Arizona, it's a warehouse in Massachusetts. It is not clear if the site running the scam ad that linked to kushlynation.com is directly affiliated with Kushly Industries at kushly.com, which has a disclaimer regarding sites that link to their site:

Hyperlinks: This site may be hyperlinked to other sites which are not maintained by, or related to, us. Hyperlinks to such sites are provided as a service to our users and are not sponsored by or affiliated with this site or with us. We have not reviewed such sites and are not responsible for the content of those sites. Hyperlinks are to be accessed at your own risk, and we make no representations or warranties about the content, completeness or accuracy of these hyperlinks or the sites hyperlinked to this site. Further, the inclusion of any hyperlink to a third-party site does not necessarily imply that we endorse that site.

A search of the BBB website for both accredited and nonaccredited businesses for CBD gummies returns mixed results and evidence of a large-scale copycat scheme. Some businesses have good scores but most have a score of "F." Many of these are associated with complaints from people who signed up for a free or reduced price trial offer who then found themselves billed monthly, at full price, for a product they did not want and had difficulty cancelling.

Lead Stories reached out to Mark Harmon's publicist for comment, but has not received a reply at the time of publishing.