In a video made to encourage COVID-19 vaccines in aboriginal communities, did Mark McGowan, the premier of Western Australia, make a patronizing and insensitive blunder by having an Indigenous interpreter stand beside him and simply repeat what he said in accented English? No, that's not true: The interpreter, in a video that has gone viral, is translating McGowan's message into Kriol, a language that shares many English vocabulary words but is a distinct language.

This video is one of a series of five McGowan produced that were published on the website of the Aboriginal Health Council of Western Australia (AHCWA). The original script of the message was vetted by Aboriginal Interpreting Western Australia (AIWA) to cut out the jargon. McGowan made one video speaking solo and four additional videos with AIWA interpreters translating the message in four Indigenous languages, Ngaanyatjarra, Martu, Walmajarri and Kriol.

The five videos of McGowan's message were promoted on the AHCWA Facebook page on December 16, 2021, and are included in the resources to view on the AHCWA website. Criticism of one of McGowan's videos seemed to develop in the second week of January 2022, with many social media posts. One example is a video published on Facebook by radio host Dan Bongino on January 13, 2022, under the title "If this video is real, then the end of times is near..." The post was captioned:

Fact checkers, I really need you to tell me this isn't real. Please. I need to know. Please tell me. 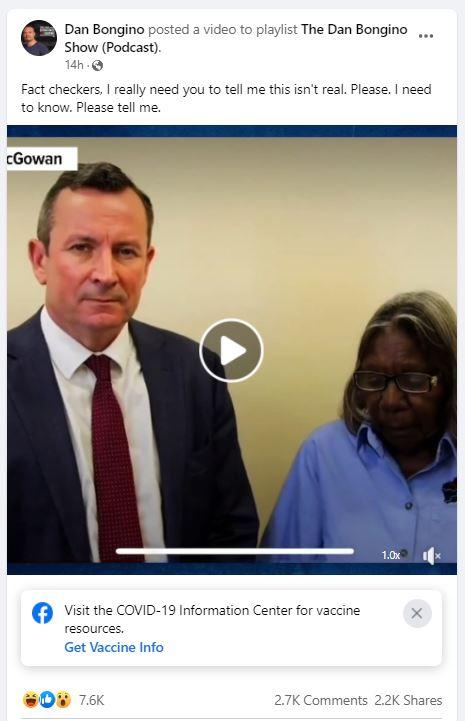 Lead Stories heard Bongino's request and this is what we found:
The video is real; it's not a joke or a patronizing insult aimed at Indigenous people. The uniformed interpreters who appear in the four videos with McGowan are from AIWA. Along with providing interpreting services, this organization also teaches a communication workshop to help develop protocols for communicating with Indigenous people. Below are screenshots of the four videos featuring McGowan and the AIWA interpreters for the Ngaanyatjarra, Martu, Walmajarri and Kriol languages. 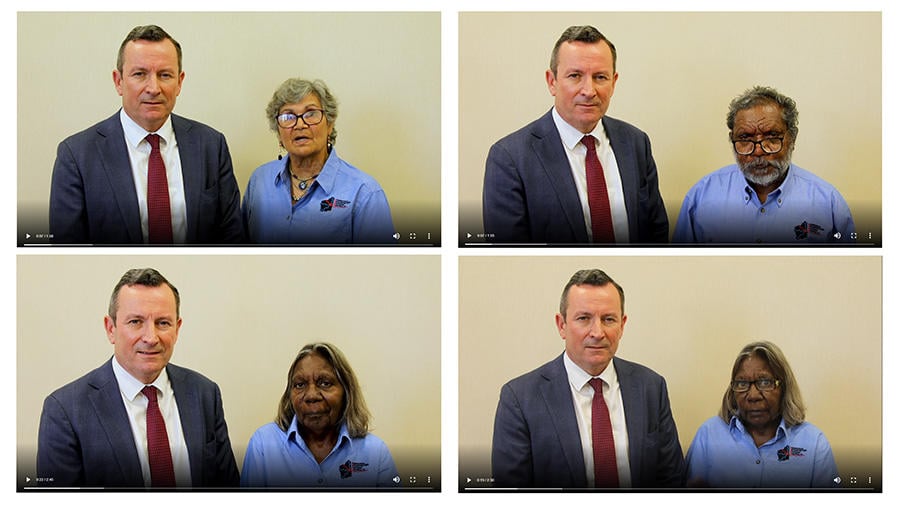 AIWA Chief Executive Deanne Lightfoot was interviewed in a January 13, 2022, article in theaustralian.com (archived here) titled, "Premier Mark McGowan's slow talk 'opposite of racist'" She explained that AIWA had vetted and received approval on their revision of the premier's script before proceeding with the translations. The article begins:

The McGowan government has made what traditional language advocates say is a crucial shift in the way it talks to Indigenous people by throwing away jargon and using interpreters for important messages about health, safety and housing.

Speaking to the criticism of McGowan and the one video with a Kriol language interpretation, the article quoted an example offered by Lightfoot:

While there are variations of Kriol across the Kimberley, each embedded with traditional language from the area, Ms Kogolo uses a generic Kriol that can be understood by people regardless of their language group.
Much of what Ms Kogolo says is recognisable as English but Ms Lightfoot said it would be wrong and dangerous to believe English and Kriol were basically the same.
She said in Kriol, for example, the word finished means dead.
'So when a doctor gives an Aboriginal patient a bottle of tablets and says "Take this medicine until you're finished," the patient could take that to mean they will die if they take the medicine,' she said.

Theaustralian.com.au finished the report with a statement:

A spokesman for Mr McGowan said he created the video with Ms Kogolo and others on advice from Indigenous groups 'with the intention of avoiding medical jargon, to ­provide important messages in colloquial, accessible language.'

Pride in and awareness of Kriol is growing, but it's a constant battle to educate English speakers given the high levels of turnover in staff in the Top End.

People who aren't familiar with Kriol often don't realise the extent of the differences between the way words are used by speakers of Kriol. An English speaking health care worker or police officer might think they're able to communicate but in reality are not getting information across.

Kriol is full of traps, [with] the English speakers thinking that they understand and overestimating how much they understand. And that's when having a really good interpreter, who's bilingual English and Kriol can really make all the difference.