Did Dr. Kerry Chant, the New South Wales, Australia, chief health officer, post a tweet that dismissed the deaths of three children while celebrating a "better than expected" result of the COVID-19 vaccine rollout for children? No, that's not true: This is a fabricated tweet. Chant did not tweet this, and the claims in the fake tweet are false. A press release from New South Wales Health said, "NSW Chief Health Officer Dr. Kerry Chant did not author the Tweet or the Instagram post attributed to her, and the information contained in both of them is incorrect," according to multiple news agencies. There was no accessible online copy of the press release at the time of writing; Lead Stories has reached out to New South Wales Health and will update this story when a response is received.

The fabricated tweet was dated January 15, 2022. It circulated on social media as a screenshot. One example is this Facebook post (archived here) published on January 15, 2022, with the caption:

How can you call 3 kids deaths as a great result?

Great result from the children's roll-out,only 3 deaths linked and 106 adverse reactions out of 377000 vaccines.I would say that is a better result than expected.

Make sure you get your children's vaccine done before school starts.
service.nsw.gov.au/transaction/re.... 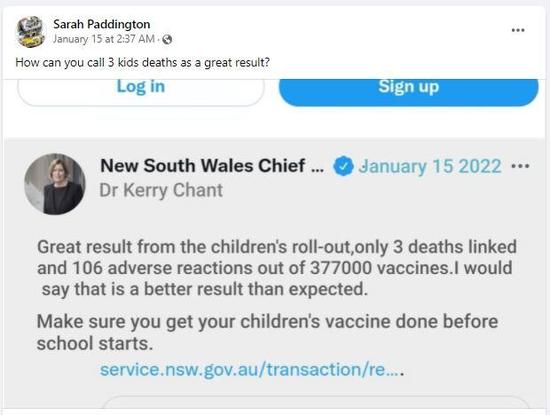 This link goes to an archived copy of the account as it appeared in September 2021. The screenshot below shows how the deactivated @nswcho Twitter account appears at the time of writing. 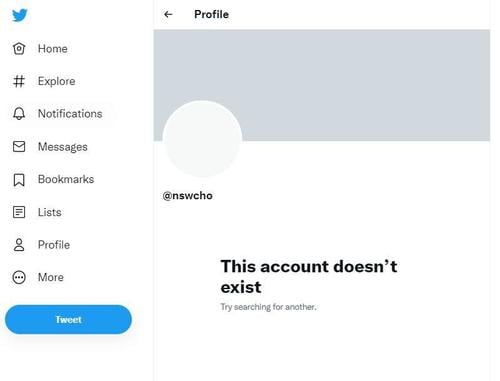 Also, when viewed in the Twitter feed, the date displayed at the top of any Twitter post does not include the year until the calendar has turned over to a new year. Below is an example of that formatting convention from Twitter's official account, showing a January 1, 2022, tweet next to a tweet from December 31, 2021:

Lead Stories recently debunked two hoaxes that claimed two Australian children died after receiving a COVID vaccine -- there is no evidence the children ever existed. Lead Stories reached out to the Therapeutic Goods Administration, the Australian government regulatory agency that would monitor adverse events associated with vaccines. The Department of Health media unit replied by email on January 24, 2022, with this statement:

The Therapeutic Goods Administration (TGA) is aware of reports circulating on social media about the deaths of 7-year-old children in Sydney. The TGA has not received any legitimate adverse event reports involving the death of any children aged between 5 and 11 years. The TGA has followed up with New South Wales Health, who have confirmed that they have not received reports matching the details in these posts.

The TGA encourages health professionals and consumers to report suspected side effects following COVID-19 vaccination to contribute to safety monitoring of these vaccines. Social media posts indicate these incidents occurred in the state of New South Wales (NSW). Health professionals in NSW are required under public health legislation to notify adverse events following immunisation to their state or territory health department. These reports are then passed on to the TGA.

The TGA is open and transparent about vaccine adverse event reports, and publishes information about fatal adverse events where the cause of death is considered likely to be related to COVID-19 vaccination in the weekly COVID-19 vaccine safety report, available at: www.tga.gov.au/periodic/covid-19-vaccine-weekly-safety-report.

Lead Stories reached out to the Department of Health again on January 25, 2022, requesting the press release regarding the fake tweet and will update this article when we receive a reply.