Was the "Russian Sleep Experiment" a real historical event? No, that's not true: The "experiment" is a product of the creepypasta genre -- which consists of user-generated, horror-related content that spreads easily online -- and is not based on a historical account.

The claim, which has appeared in various iterations online, reappeared in a Facebook post (archived here) on February 1, 2020. The post included a black-and-white image of a human-like creature and opened:

The Russian Sleep Experiment purports to recount an experiment that took place at a test facility in the Soviet Union in the late 1940s. In a military-sanctioned scientific experiment, five political prisoners were kept in a sealed gas chamber, with a continually administered airborne stimulant for the purpose of keeping the subjects awake for 15 continuous days. The prisoners are falsely promised freedom if they complete the experiment.

The post went on to describe how the political prisoners gradually, then swiftly, spiraled into violence and self-mutilation. The subjects all eventually died. 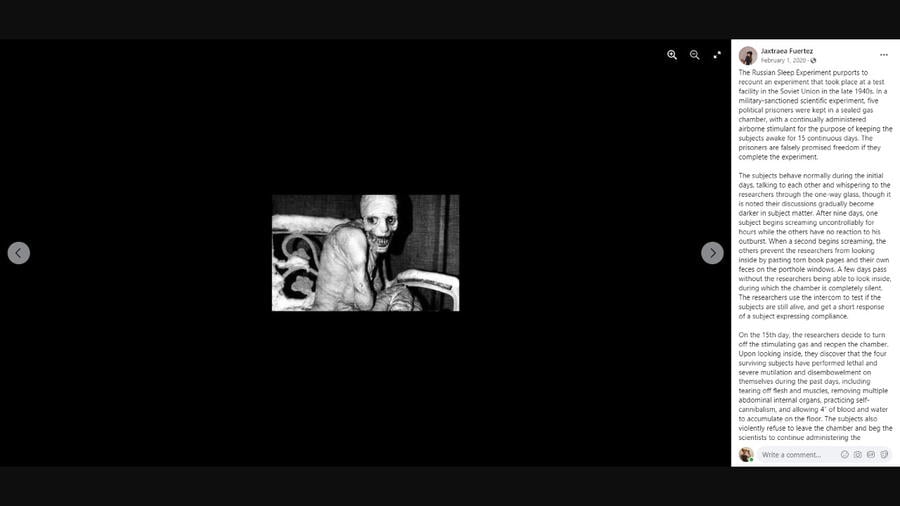 The story of the Russian Sleep Experiment has been debunked by numerous outlets, including Snopes. According to a video created by Creepypasta Wiki, the story seemed to have originated in 2009 on an online forum. The story then appeared on the Creepypasta Wiki website in 2010 and was posted by a user known as Orange Soda.

The picture used in the Facebook post is of a Spazm prop, a Halloween prop of a monstrous-looking human in a straitjacket. That image can be found in a popular YouTube video of a reading of the Russian Sleep Experiment here and in the screenshot of the video included below:

The story may have been inspired by the unethical experiments committed against human subjects during World War II, particularly those that took place in Nazi concentration camps. However, there is no legitimate record of the Russian Sleep Experiment.