Did two 7-year-old Australian children, Allison Coleman and Lachlan Leary, both die shortly after receiving a COVID-19 vaccine in the week the COVID vaccines were being rolled out in New South Wales to children in the 5- to 11-year-old age bracket? No, that's not true: Other than the social media posts that put the stories into circulation, there is no evidence that these children died or ever existed. The stories appear to be a hoax designed to frighten parents. It is not clear if the stories originated from the same source -- if it is one complex hoax involving two fictitious children, or if it is two independent hoaxes similar in theme and timing.

The social media posts with the stories about the two children surfaced in the second week of January 2022. One example of a Facebook post about Allison Coleman was published on January 17, 2022. This post contained two screenshots, one of the "Pfizer Victim" meme and a second screenshot of a 24-hour restriction notice from Facebook. The post was captioned:

I was thrown in FB jail for posting something that goes against their community "standards"... of ALL my posts, can you guess which one it was?
Yep, that's right.. the memory of a little girl who was MURDERED by the worlds bioweapon!!! 😡😡😡 RIP Allison Coleman, justice WILL prevail in Yahu'ah when His righteous judgment comes and slays this wicked and vile kingdom.
Time is near. Repent if you haven't, return to His instructions and commands, and be delivered! 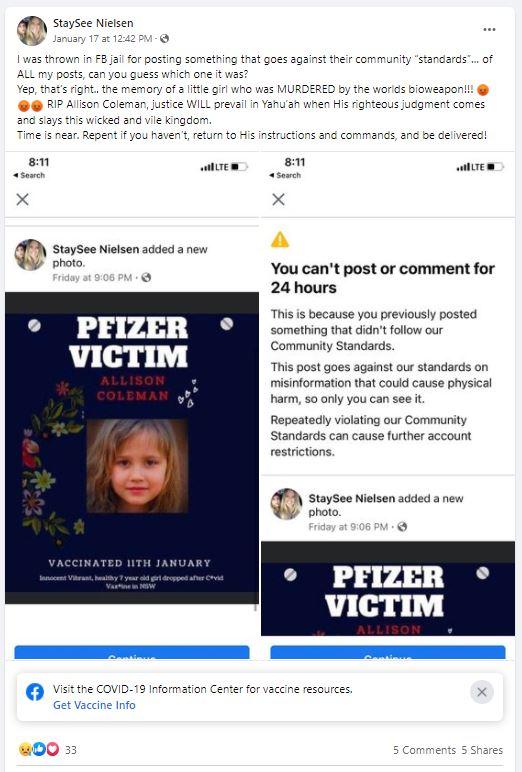 The text on the meme reads:

On January 22, 2022, the Sydney station 7NEWS Australia published a segment on YouTube that focused on the other hoax story, this one about a boy named Lachlan Leary. They called the story a lie and called the now-deleted Facebook profile that posted the story pretending to be the child's father a fake.

Lead Stories reached out for comment to the Australian government regulatory agency that would monitor adverse events associated with vaccines, the Therapeutic Goods Administration, and received a reply by email from the Australian Department of Health Media Unit on January 24, 2022, which stated:

The Therapeutic Goods Administration (TGA) is aware of reports circulating on social media about the deaths of 7-year-old children in Sydney. The TGA has not received any legitimate adverse event reports involving the death of any children aged between 5 and 11 years. The TGA has followed up with New South Wales Health, who have confirmed that they have not received reports matching the details in these posts.

On their Facebook post announcing the vaccine rollout for the 5 to 11 age group, the Children's Hospital at Westmead responded to comments about the purported death of Lachlan Leary:

Hi Stephen, there are many inaccurate posts currently circulating on social media. There is no record of any child having passed away following COVID vaccination at our hospital.

Hi everyone, Im not sure how long my post will last as I've had it removed 4 times already, the disgusting inhumane fb fact checkers and our corrupt government will not allow my comment to stay up. Everyone, I lost my son lachlan last Wednesday to the vaccine. He was 7 yrs old. He had been unwell on Wednesday night with a fever and we monitored him closely, 6am the next morning he started having breathing difficulties so we took him to westmead hospital. They tried to stop us from going in with him but it did not work as I threatened to contact Rebel news and have a reporter here within minutes and they backed off, we were allowed in. 4 hours passed after many tests. He was sent home 5 hours later.
Friday morning at 4am we heard him yell out, he was on his bedroom floor, he then collapsed, he was not breathing, my wife and i began cpr, I called the ambo on loud speaker. Ambo arrived within 7 mins, my son passed away in the ambulance. He had a massive heart attack.
My wife is now hospitalised in westmead hospital heavily sedated. I am trying to hold everything together for our 2 Yr old daughter Sammy. The government has ruined my family, they have taken away our only son, we put our trust in the government to keep us safe and they killed my boy!!!! I have been banned from twitter, posts deleted on my fb page and warnings issued on community standards. So the death of my beautiful boy is being censored!!! I have taken the time this afternoon to email the PM and have demanded an immediate explanation!! My message to parents now is do not allow these people to touch your kids!! I have been abused for allowing my son to be vaccinated but as parents we thought we were keeping him safe. We have to live with this for the rest of our lives. Please please don't let your babies be subjected to this. I can't bring my boy back and my family is now broken while our PM lives the high life of luxury probably unvaxxed and his kids as well.
Australia it's time to wake up now, do not make the mistake I did.
Rip my beautiful lachlan, mummy and daddy are so sorry.

On January 16, 2022, absolutegeneralnews.com published an article titled, "Lachlan Leary Death Cause: Steve Leary Son Died, Funeral And Obituary." This article featured a large distorted portrait of a man purported to be Lachlan's father. A reverse image search for this stretched photo returned results of other clickbait obituary websites with the story of Lachlan's death. Lead Stories used Photoshop to return the distorted photo to a square dimension and the search results now pointed to the Facebook page of a real person named Steve Leary, a politician in Florida in the United States -- not an Australian dad. 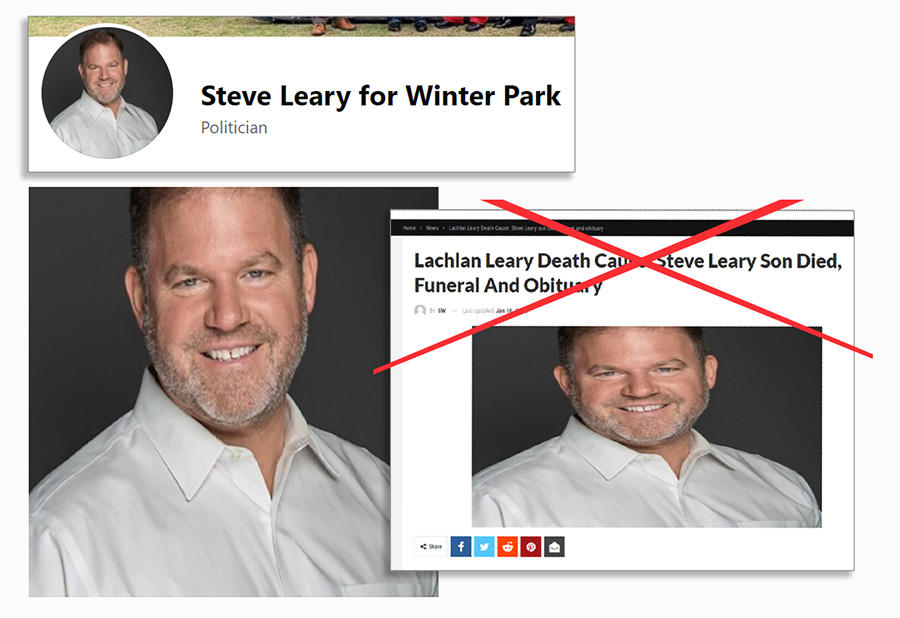 This is an example of the screenshots of the Steve Leary post that were shared to the private Facebook group "Covid-19 Vaccine Adverse Reactions and Feedback Australia" and are now circulating outside the group. 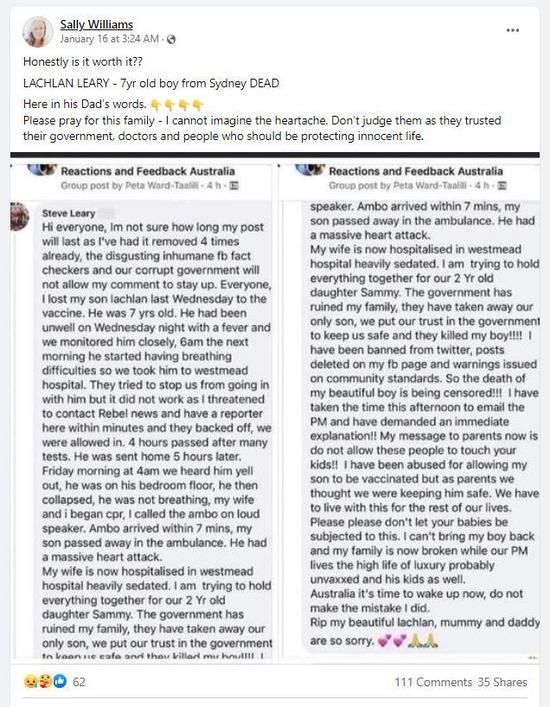 The "Pfizer Victim meme" for Allison Coleman also includes a photo of a young girl and a floral border. This one small low-resolution image is the only photo circulating purported to be Allison Coleman. The main evidence to back up the story that a child died are a large number of clickbait obituary websites. One website, death-obituary.com (archived here) published an obituary for Allison Coleman on January 12, 2022, that begins:

Allison Coleman Death - Allison Coleman, an Australia little girl who was vaccinated on Tuesday, January 11th, 2022 has died. Unverified claims alleged that Allison passed away after taking the Pfizer vaccine. These claims have not verified and cannot be said to be true.

The 7-year-old took the vaccine on Tuesday, January 11 in NSW. Her death came shortly after taking the vaccine. There are several contradictory reactions on the death of Allison. While many believed her death isn't associated to the vaccine, others believed the vaccine must have killed the 7-year-old.

We are yet to notice statement from Allison's parents or any family member on her death. Has autopsy been carried out on Allison?

Death-obituary.com appears to host a random assortment of death notices that are not connected to one funeral home's services or specific geographic region. Although the website does list a physical address, 13005 Greenville Avenue California, TX 70240, this address appears on many seemingly unrelated and under-construction websites. For example, one unfinished website, vetphysicalrehab.co.za with the South African .za domain, is set up to sell Dod (sic) Food. Another website with a questionable choice in name, mourningwood.org, appeared to be destined to be an obituary page for the Blessing Funeral Home and Cemetery, but only has lorem ipsum text filler making up the obituaries of the fake names associated with the stock photos.

Lead Stories has done extensive analysis of images that were created with the StyleGAN program found on websites such as thispersondoesnotexist.com. The one-of-a-kind computer-generated faces are delivered in a square format and the eyes of every face, regardless of the apparent age, gender or expression, always are positioned in the same place in the square. The face used to represent Allison Coleman has many similarities with other StyleGan faces -- but the image is not a perfect square. As with the Leary photo, without cropping, Lead Stories returned the distorted image to a square dimension and compared it with other computer-generated faces from thispersondoesnotexist.com. A complete analysis is not possible due to the low resolution of the meme image, but the lack of any additional photos or proof that she ever existed points to this photo being computer generated. 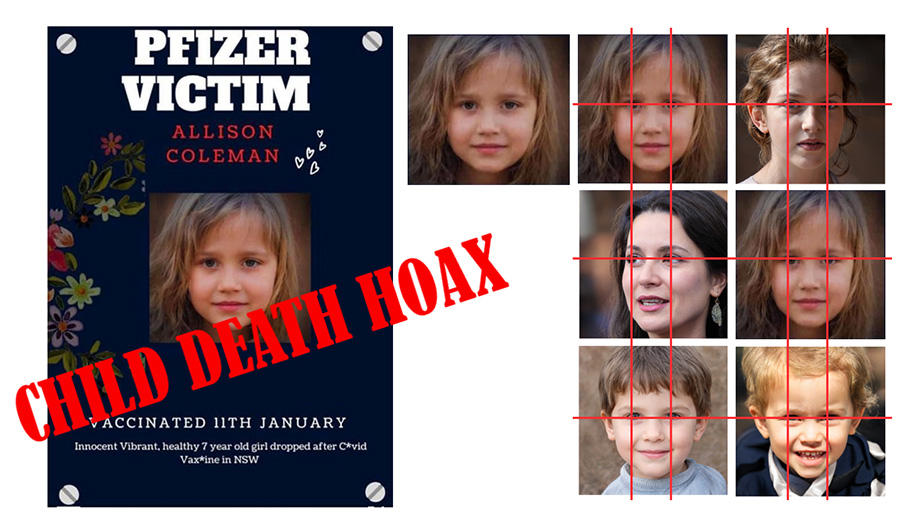