Do COVID-19 vaccines for children fail risk/benefit analysis, permanently damaging children's brains and reproductive systems to prevent a harmless infection? No, that's not true: The claim is made without scientific evidence to support it and in the face of data showing some children are killed and seriously sickened by COVID. Meanwhile, the consensus of published, peer-reviewed and field tested expert pediatric guidance is that the vaccines protect most patients from COVID-19 infection, and for those who suffer breakthrough infection, vaccines reduce serious illness, hospitalization and death. The American Academy of Pediatrics recommends vaccination of any child 5 or older using any of the vaccines approved by the Food & Drug Administration, including those offered under Emergency Use Authorization.

The claims appeared in a Bitchute video (archived here) published January 18, 2022, under the title "NEVER EVER TAKE THIS "VACCINE". WE WONT HAVE MUCH MORE TIME LEFT, THEY WILL PULL THE PLUG." It opened:

This is how the video appeared on the date of writing: 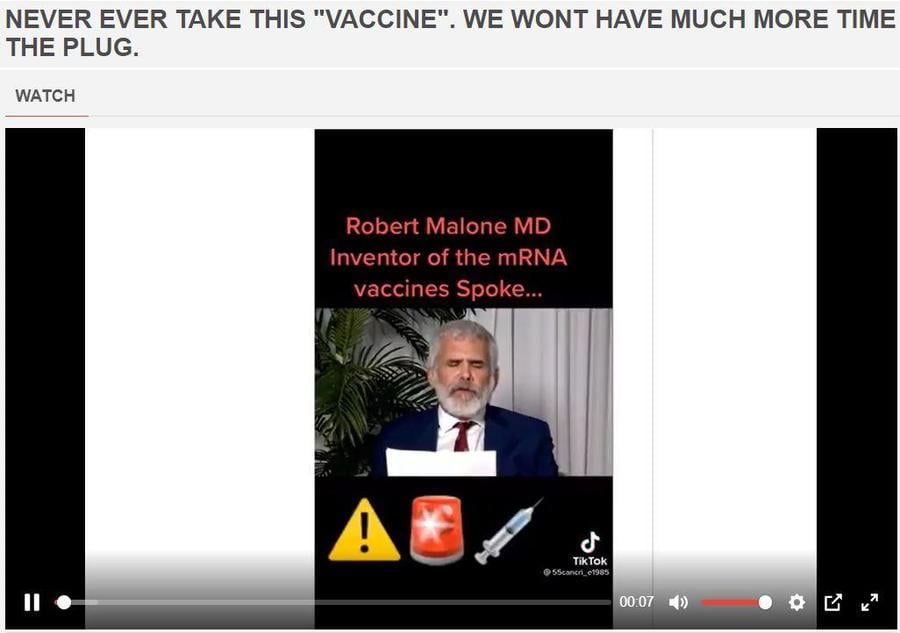 The claims about dangers to children of mRNA vaccines against COVID19 are made by Robert Malone, MD, a medical researcher and biochemist who contributed early research into mRNA vaccines, which inject the blueprints for spike proteins into human cells, programming them to temporarily create the spikes that characterize the SARS-CoV-2 virus, thereby training the immune system to attack viruses that bear the spike protein.

Malone makes multiple declarations about dangers of COVID vaccination in the video, but without reference to published studies, lab reports or other independent means of verification that would be expected from a working research scientist. The video begins with Malone saying:

"I wanted to let you know the scientific facts about this genetic vaccine, which is based on the RNA vaccine technology I created...A viral gene will be injected... This gene forces your child's body to make toxic spike proteins. These proteins often cause permanent damage in children's critical organs. These organs include their brain and nervous system, their heart and blood vessels, including blood clots, their reproductive system, and most importantly, this vaccine can trigger fundamental changes to their immune system."

Those are not the facts about COVID mRNA vaccines, says Professor Deborah Fuller, the Ph.D. microbiologist who runs a vaccine research lab at the University of Washington that has worked on COVID-19 vaccine development since the first major U.S. outbreak, in Seattle. In a January 27, 2022, email responding to Lead Stories' questions, Fuller wrote:

There is no evidence that the miniscule amount of Spike protein produced by the mRNA vaccines is toxic ... In fact, the studies that have been done to date show that only very, very small amounts are produced and rapidly eliminated from the body. The way the vaccine works is the protein is transiently expressed in the cells that the mRNA vaccine is delivered into and then the protein quickly disappears after initiating the immune response. The only change to our immune system generated by this vaccine is a the induction of immune responses ...

Fuller wrote that there's no doubt children should be vaccinated against COVID:

For the mRNA vaccines, there is a rare risk of myocarditis after immunization ... among young males aged 12-17 but that risk is much lower than getting myocarditis from a COVID-19 infection itself.

In addition, to myocarditis, unvaccinated children are also at higher risk of pediatric inflammatory multisystem syndrome (PIMS-TS) and may also be vulnerable to long COVID (although studies are still in progress to determine this).

The Centers for Disease Control and Prevention, which monitors U.S. vaccination efforts and has, in the recent past, ordered a halt to vaccination when unexpected severe reactions arose, declares the vaccine safe, based on "the most comprehensive and intense safety monitoring program in U.S. history."

In its report on COVID vaccine safety, the CDC says it is safe for children to get other vaccines at the same time and that "Serious health events after COVID-19 vaccination are rare." Inflammation of the heart and outer lining of the heart have been reported after vaccination with the Pfizer-BioNTech vaccine, but the CDC notes they are rare: 54 cases per million doses administered to males ages 12-17 years. The condition corrects itself and, the CDC notes, adolescents ages 12 through 17 have a higher risk for myocarditis than children ages 5 through 11 years. The CDC also specifically called out the claim about damage to the reproductive system, writing on its website: "There is no evidence that COVID-19 vaccines cause fertility problems."

Another post of the same video includes Malone's wrap-up, in which he says:

The risk/benefit analysis is not even close with this vaccine for children.

Fuller said Malone's declarations contradict themselves. She wrote, in her email to Lead Stories:

Finally, there is blatant contradiction between the false statement: "This gene forces your child's body to make toxic spike proteins. These proteins often cause permanent damage in children's critical organs," and '... the small risks of the virus... " [in children].

The virus produces substantially more Spike protein in the bodies of children that become infected when compared to the miniscule amounts produced by an mRNA vaccine so if Spike were actually toxic as claimed then how can there be only a "small risk of the virus"?

Malone's claims are also directly opposite to the guidance from the nation's pediatric medicine experts: the American Academy of Pediatrics, whose advice is:

COVID-19 vaccines are life-saving vaccines. Delaying immunization leaves an individual vulnerable to infection for a longer period of time, placing them at greater risk of serious illness and death. AAP recommends COVID-19 vaccination for all children and adolescents 5 years of age and older who do not have contraindications using a COVID-19 vaccine approved through an Emergency Use Authorization (EUA) or Biologics License Application (BLA), recommended by CDC, and appropriate for their age and health status. AAP also supports coadministration of COVID-19 vaccines with other vaccines on the immunization schedule.

Citing research papers produced by two national teams of physicians and lab scientists, the American Academy of Pediatrics counsels parents to have their children vaccinated to reduce the risk of short-term illness as well as so-called "long COVID," a cluster of symptoms that plague COVID patients long after the usual symptoms subside.

Published in January of 2022, the second paper cited by the Academy of Pediatrics found that all critically ill COVID patients under age 18 were unvaccinated. The authors wrote that the implications of their study were that "Receipt of 2 doses of Pfizer-BioNTech vaccine is highly effective in preventing MIS-C {Multisystem inflammatory syndrome in children} in persons aged 12-18 years. These findings further reinforce the COVID-19 vaccination recommendation for eligible children."

MIS-C is one of the more serious symptoms observed in children from the first outbreak in the U.S., where it was documented in 2020 by colleagues of Fullers' at the University of Washington medical school and hospitals.

More than 2 million children had been infected with COVID as of January 2022, according to The Centers for Disease Control and Prevention (CDC).

The CDC's ruling on safety is, "The benefits of COVID-19 vaccination outweigh the known and potential risks." The agency recommends vaccination of children 5 or older, based on safety data derived from clinical trials testing the vaccines on thousands of children and on the rare reactions in the 24 million under-18 Americans vaccinated as of January 19, 2022.

Health Feedback, an organization of scientists who write fact checks and explanatory articles about science, rates Malone's claim that he invented mRNA vaccine technology overstated, noting his 1989 work was important, but that the use of mRNA to deliver selected blueprints to cells had been documented 10 years earlier. Dozens of other scientists refined the idea to the point it could be used in mass vaccination campaigns like the war on COVID-19, Health Feedback noted in an August 2021 report on Malone's oft-repeated claim.