Is former President Donald Trump "OFFICIALLY" a candidate for president in the 2024 U.S. election? No, that's not true: Official candidates in federal U.S. elections must file with the Federal Election Commission, which Trump has not done as of February 3, 2022.

Trump is OFFICIALLY running for 2024 President. Will you be voting for him? Take our short poll and get a FREE limited edition Donald Trump wrist watch! 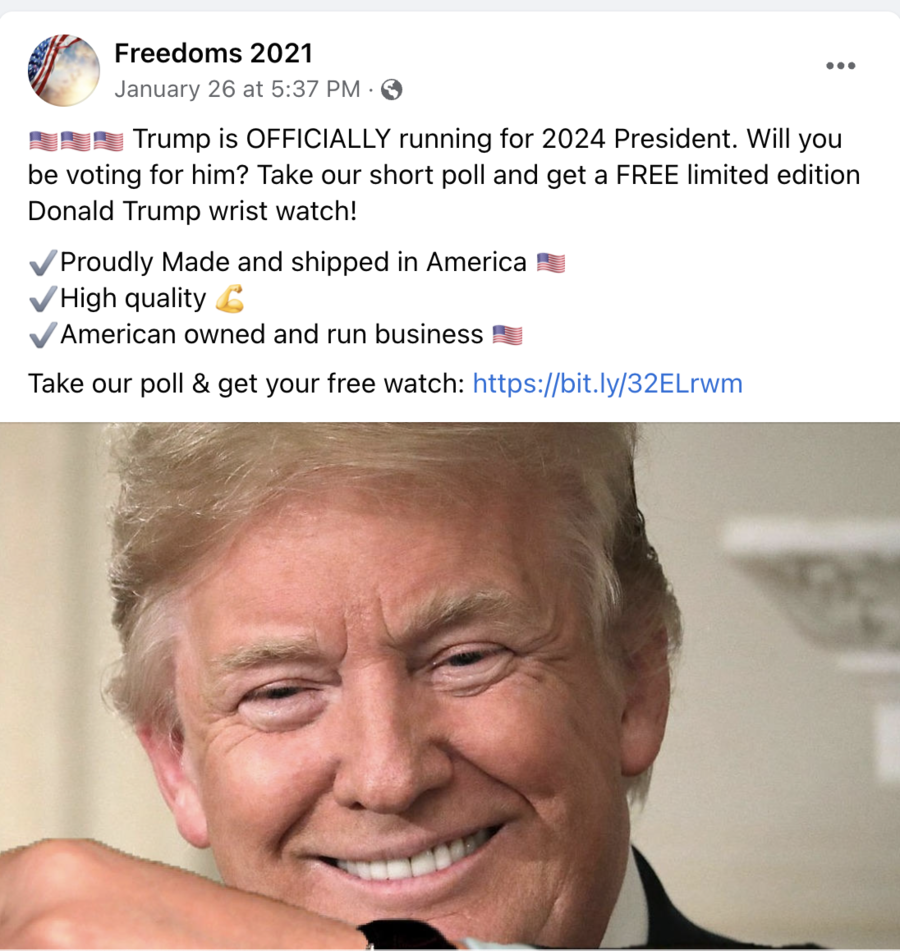 While many pundits have suggested that the former president may run for president again in 2024, he stated in an interview with Sean Hannity on January 20, 2022, on Fox News that he hadn't announced a decision quite yet:

HANNITY: Mr. President, we appreciate it. Are you running in 2024? We have 15 seconds.
(LAUGHTER)
TRUMP: Well, I think you will be happy, but we will let you know at a little bit later date. But I think you will be very happy. I hope so.
HANNITY: I saved that for the last 15 seconds, because I knew you were not going to answer that question.

It seems extremely unlikely the president would announce his candidacy in the 2024 race without any public statements (and even more unlikely that his candidacy would first be announced by a poorly photoshopped ad for a watch). A search of the FEC database for the paperwork necessary to be an official candidate shows that Trump has not filed any paperwork with them since March 2020.

On September 11, 2021, the former president explained in an interview with the Washington Post one reason why an announcement had not yet been made:

"We're not supposed to be talking about it yet, from the standpoint of campaign finance laws, which frankly are ridiculous," Trump said on Sept. 11, when asked if he would again be a candidatie [sic] for presdent [sic]. "But I think you are going to be happy. Let me put it that way."