Do these photos show fanciful outfits elderly people came up with after being given access to a forest and told to dress up using the available raw materials? No, that's not true: These photos are the result of a collaborative art project between Norwegian photographer Karoline Hjorth, Finnish artist Riitta Ikonen and the individuals featured in the works. Each person is an important part of the collaborative vision of the artists demonstrating the "continual search for modern human's belonging to nature" -- but the photos are not the result of one day of haphazard scavenging for raw materials by the people in the pictures.

Each scene was planned and executed with care and the pictured collaborator is dressed in a wearable sculpture, sometimes representing classical folklore, composed of natural material and photographed in accordance with the artists' shared vision. This project has been developing for over a decade and has visited at least 13 countries.

The start of the art collaboration known as "Eyes as Big as Plates" began in 2011 and is ongoing, with the anticipated publication of a second photobook in the winter of 2022. Recently photos from the project were posted on Facebook in the group Weird, Fantastic & Beautiful Everything on January 4, 2022, with a misleading caption. Originally the caption read:

In Findland they gave 12 elderly people access to a Forrest and were told to dress up in whatever they could find; here are the results.

On January 7, 2022, the caption was edited to change the country from Findland (sic) to England and to add the names of the artists. Commenting has been turned off.

In England they gave 12 elderly people access to a Forrest and were told to dress up in whatever they could find; here are the results.
Artist: Karolina Hjorth and Riitta Ikonen 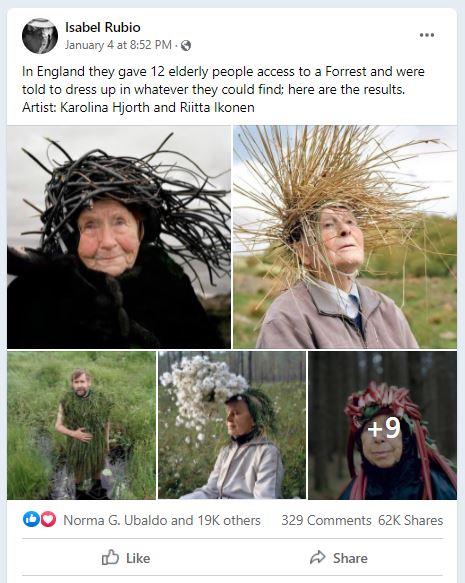 Many of the original commenters on this post pointed out that the origin of the photos was not accurately described and the artists were not credited. The post's caption was eventually edited to add the artists' names but not to correct the explanation of what was pictured.

The website karolinehjorth.com has a section dedicated to the collaborative project "Eyes as Big as Plates." The project is introduced in this way:

Eyes as Big as Plates is the ongoing collaborative project between Karoline Hjorth (NO) and Riitta Ikonen (FI). Starting out as a play on characters from Nordic folklore, Eyes as Big as Plates has evolved into a continual search for modern human's belonging to nature. The series is produced in collaboration with retired farmers, fishermen, zoologists, plumbers, opera singers, housewives, artists, academics and ninety year old parachutists. Since 2011 the artist duo has portrayed seniors in Norway, Finland, France, US, UK, Iceland, the Faroe Islands, Sweden, Japan, Greenland, Czech Republic and South Korea. Each image in the series presents a solitary figure in a landscape, dressed in elements from surroundings that indicate neither time nor place. Here nature acts as both content and context: characters literally inhabit the landscape wearing sculptures they create in collaboration with the artists.

Another page on the website features a list of articles about the project published in international media and art reviews. Topping the list is a 2020 slide presentation Hjorth and Ikonen gave at a TED conference about their collaborative work. Included in this talk were some photos from one more country the artists have visited, Senegal.