Did Buzz Aldrin reveal that the Apollo 11 mission was faked when he corrected Conan O'Brien's recollection of having watched the moon landing live on TV as a child by telling him that what he watched was an animation? No, that's not true: Buzz Aldrin made a technical distinction to clarify that the live TV broadcasts showed an animation of the landing because there was not a TV crew with cameras there to film the landing from that perspective. He did not imply that the landing hadn't happened.

The video clip originated from a May 17, 2000, guest appearance Buzz Aldrin made on "Late Night with Conan O'Brien." A brief portion of that appearance was posted on Facebook on January 31, 2022. The captioning included in the video clip says:

A six-minute-long segment of the Conan O'Brien interview with Buzz Aldrin that aired on May 17, 2000, was posted on the Team Coco YouTube channel on July 20, 2020. Ten seconds into the video O'Brien says:

Let's talk about this because this is fascinating. I remember very clearly, I think anybody who was alive at the time does ... I remember my parents waking me up and we went down and we watched you guys land on the moon.

I have very hazy memories. What we saw was -- we were all gathered around the old curved top radio.

This is where the video posted on Facebook cuts off -- but in the interview by Conan O'Brien, Aldrin continued describing the audio from the moon landing which was broadcast:

You heard me talking about you know, how many feet we were going to the left and right and then I said, 'Contact light engine stop,' there was a few other things and then Neil said, 'Houston, Tranquility Base. The Eagle has landed.' Man, how about that? That was not a bad line.

Note: The phrase that Neil Armstrong said was, "Houston, Tranquility Base here. The Eagle has landed." This can be heard at the 1:28 mark in the CBS archive footage posted on cbsnews.com on July 19, 2019, to coincide with the 50th anniversary of the moon landing. It is captioned:

Watch the moment men first landed on the moon
Walter Cronkite anchored CBS News live coverage on July 20, 1969, as Apollo 11's "Eagle" lunar lander, carrying astronauts Neil Armstrong and Edwin "Buzz" Aldrin, touched down on the moon. TV viewers were seeing a simulation of the lander, since NASA's video cameras were not yet operating on the moon.

Below are screenshots from the CBS footage showing some of the animated and simulation scenes. During the broadcast, chyrons indicating that this was as "ANIMATION" or a "CBS NEWS SIMULATION" would appear on the screen for a few seconds at a time. The simulated view of the lunar module Eagle landing was slightly out of sync, about 20 seconds ahead of the audio transmission that announced the actual landing. The words "LUNAR MODULE HAS LANDED ON THE MOON" did not appear on screen until the astronauts' audio indicated that had happened, at the 1:13 mark. 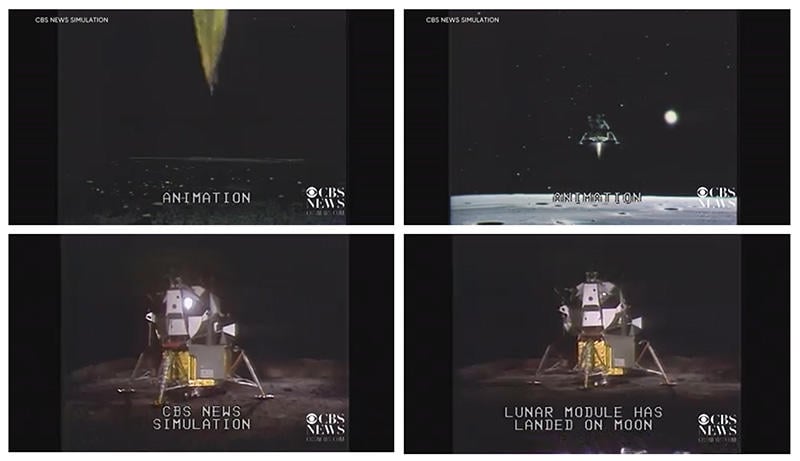 Not all the scenes broadcast to the live television viewing audience in 1969 were simulated. There were two TV cameras: One stayed on the command module Columbia and a black and white Westinghouse TV camera went with the lunar module Eagle. It was mounted on the exterior of the Eagle, positioned so it could broadcast Armstrong climbing down the ladder and his first steps on the moon, an event that came ahead of schedule, but more than six hours after the landing. This camera was also mounted on a tripod to film on the surface of the moon.

In 1969 footage from ABC News before the launch, space correspondent Jules Bergman shows the camera and demonstrates what its images look like from the parking lot of the Kennedy Control center. Embedded below is a CBS News video of the live 1969 TV broadcast of the first steps on the moon. One minute into this clip, a label clarifies, "LIVE FROM THE SURFACE OF THE MOON." Viewers of the live broadcast watched the black and white footage of Armstrong climbing down the ladder and his first steps, and (at 2:43) heard his famous words, "That's one small step for man, one giant leap for mankind."