Is this a picture of Abraham Lincoln, who was a runaway slave who changed his identity to avoid being lynched? No, that's not true: The man pictured is an unidentified person who sat for a portrait by Augustus Washington, a daguerreotypist, who was a free man of color and who emigrated to Liberia in late 1853. This daguerreotype was transferred from the records of the American Colonization Society to the Library of Congress in 1964 or 1965. Although his identity is not known, there is no question that the man in the photo is not Abraham Lincoln whose physical appearance and whereabouts were well documented throughout his adult life.

Facebook posts (here, here and here) misidentifying the man in the daguerreotype as Lincoln date back as early as 2015. A recent example was posted to Facebook with additional screenshots of documents. It was published on February 6, 2022, and opened:

BOOM ABRAHAM LINCOLN HAND WRITING STATING THAT HE IS DARK IN COMPLEXION
GUESS WHAT ABRAHAM LINCOLN WAS A RUN AWAY SLAVE AND HE ADMITTED TO CHANGING HIS IDENTITY BECAUSE HE WAS IN FEAR OF GETTING LYNCHED !!! 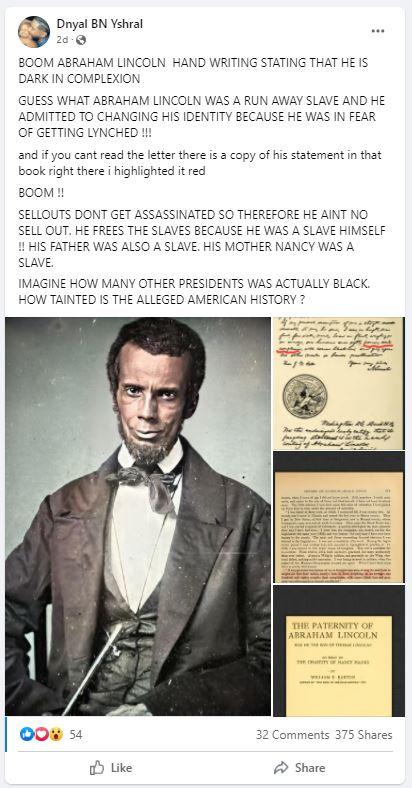 and if you cant read the letter there is a copy of his statement in that book right there i highlighted it red
BOOM !!
SELLOUTS DONT GET ASSASSINATED SO THEREFORE HE AINT NO SELL OUT. HE FREES THE SLAVES BECAUSE HE WAS A SLAVE HIMSELF !! HIS FATHER WAS ALSO A SLAVE. HIS MOTHER NANCY WAS A SLAVE.
IMAGINE HOW MANY OTHER PRESIDENTS WAS ACTUALLY BLACK. HOW TAINTED IS THE ALLEGED AMERICAN HISTORY ?

The main image of this post is derived from a daguerreotype created by Augustus Washington that is currently in the collection of the Library of Congress (LOC), call number DAG no. 1013. It is titled, "[Unidentified man with beard, half-length portrait, full face]". Each daguerreotype is a unique black-and-white image made directly on a polished surface of silver-plated copper; that metal plate is then housed in a protective case. The LOC website has a color photo of the original daguerreotype, documenting the blue discoloration in the original. The LOC also has black-and-white digital copies of the daguerreotype. The version appearing in the Facebook post was colorized by an unidentified person. 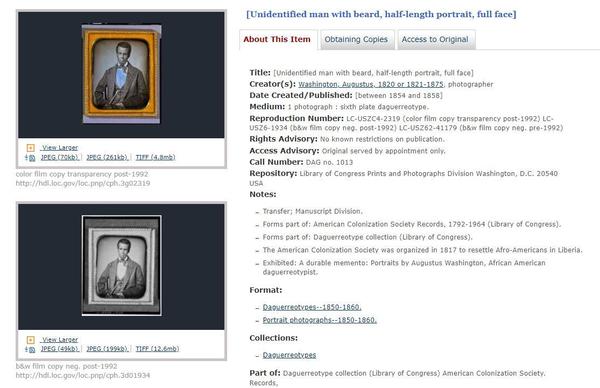 The person sitting for a portrait in DAG no. 1013 is not known, but the image was made in West Africa by Washington sometime between 1854 and 1858.

The daguerreotypist Augustus Washington was born in New Jersey. His father and stepmother were former slaves. In 1843 he enrolled at Dartmouth where he was the only Black student. In his one year there he learned the daguerreotype process. After he left, he opened a portrait studio in 1846 in Hartford, Connecticut.

In November 1853 Washington emigrated with his family to Liberia, a country on the coast of West Africa that had declared its independence from the American Colonization Society in 1847. (The American Colonization Society, founded in 1816, was an abolitionist society dedicated to moving free Blacks from the United States to West Africa.) Washington operated a portrait studio in Liberia for about four years. During that time he also had temporary studios in Sierra Leone, The Gambia and Senegal.

Many of the portraits Washington took at that time show people, like himself, who had emigrated to Liberia from the United States. It is not a portrait of Abraham Lincoln.

Lead Stories contacted the curator of photography at the LOC to ask about the provenance of the daguerreotype. The item was transferred to the LOC collection in 1964 or 1965 from the records of the American Colonization Society, they replied by email on February 8, 2022.

Some Facebook posts imply that this image "was locked away in the archives inside the Library of Congress." This is not accurate. Like many fragile historical photos and documents, the original is not on public display, but the digital copies are easily searched for and accessed on the LOC website. They can be viewed in person if an appointment is made. In 2000 the original daguerreotype was included in a National Portrait Gallery touring exhibition of Washington's work titled, "A Durable Memento."

In an article titled, "Overview Of The History, Political Views And Spiritual Side of President Abraham Lincoln" moorishamericannationalrepublic.com (the website of the Moorish Science Temple) claims that Abraham Lincoln was a "tawny moor." The article features reproductions of 1864 political propaganda (archived here) against Lincoln labeling him "Abraham Africanus I." The LOC image DAG no. 1013 is falsely captioned as if the LOC had identified it as an image of Abraham Lincoln:

The LOC has many original images of Lincoln, including the earliest known image, a daguerreotype portrait believed to have been taken of the congressman-elect by Nicholas H. Shepherd in Springfield, Illinois in 1846 or 1847. Lincoln did not wear a beard until after he won the 1860 presidential election. The LOC also has life casts (view short video) of Lincoln's face and hands. These casts were made by sculptors who took a mold from Lincoln while he was alive, the first before the election in 1860 and the second two months before he was assassinated in 1865. 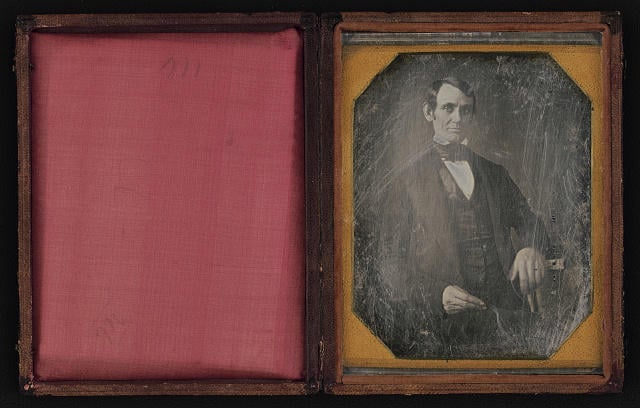 The additional documents pictured in this Facebook post include a portion of a handwritten "Autobiographical Sketch," the entirety of which can be found here. In this December 20, 1859, letter from Springfield, Illinois to J.W. Fell, Esq., Lincoln describes his family background, early life, education, work and early political career up to that point. The letter finishes with his appearance:

If any personal description of me is thought desirable, it may be said I am, in height, six feet four inches, nearly; lean in flesh, weighing on an average one hundred and eighty pounds; dark complexion, with coarse black hair and gray eyes. No other marks or brands recollected.

This concluding remark about marks and brands echoes the types of descriptions that might be seen in runaway slave advertisements at the time. Abraham Lincoln was not a runaway slave, nor were his parents. There is a verbal account that in a speech Lincoln did refer to himself and his friend John E. Roll as a slave, but neither of them had been enslaved.

Why would Lincoln announce that he was a former 'slave'? The bare facts he did not disclose to his audience were these: Until he was 21 years old, Lincoln's father had rented him out to neighbors in rural Indiana at a price of 10 to 31 cents a day, to labor as a rail splitter, farmhand, hog butcher and ferry operator.

The last image in the Facebook post is the title page of a 1920 book by Lincoln historian William E. Barton titled "The Paternity of Abraham Lincoln" (archived here). The author investigates various theories about the Lincoln family tree and concludes:

Few American families have been traced with greater care than his, and so far as we know he was in every line of his ancestry American of pure Anglo-Saxon descent.