Does the human heart have a predetermined and therefore limited number of heartbeats, making it pointless to exercise? No, that's not true: Extensive research has shown that exercise strengthens the heart.

The claim appeared in a Facebook post (archived here) on February 8, 2022. It included a meme with a picture of someone who appeared to be a doctor and text that reads:

Q: Doctor, I've heard that cardiovascular exercise can prolong life. Is this true?
A: Heart only good for so many beats, and that it... Don't waste on exercise. Everything wear out eventually. Speeding up heart not make you live longer; it like saying you extend life of car by driving faster. Want to live longer? Take nap. 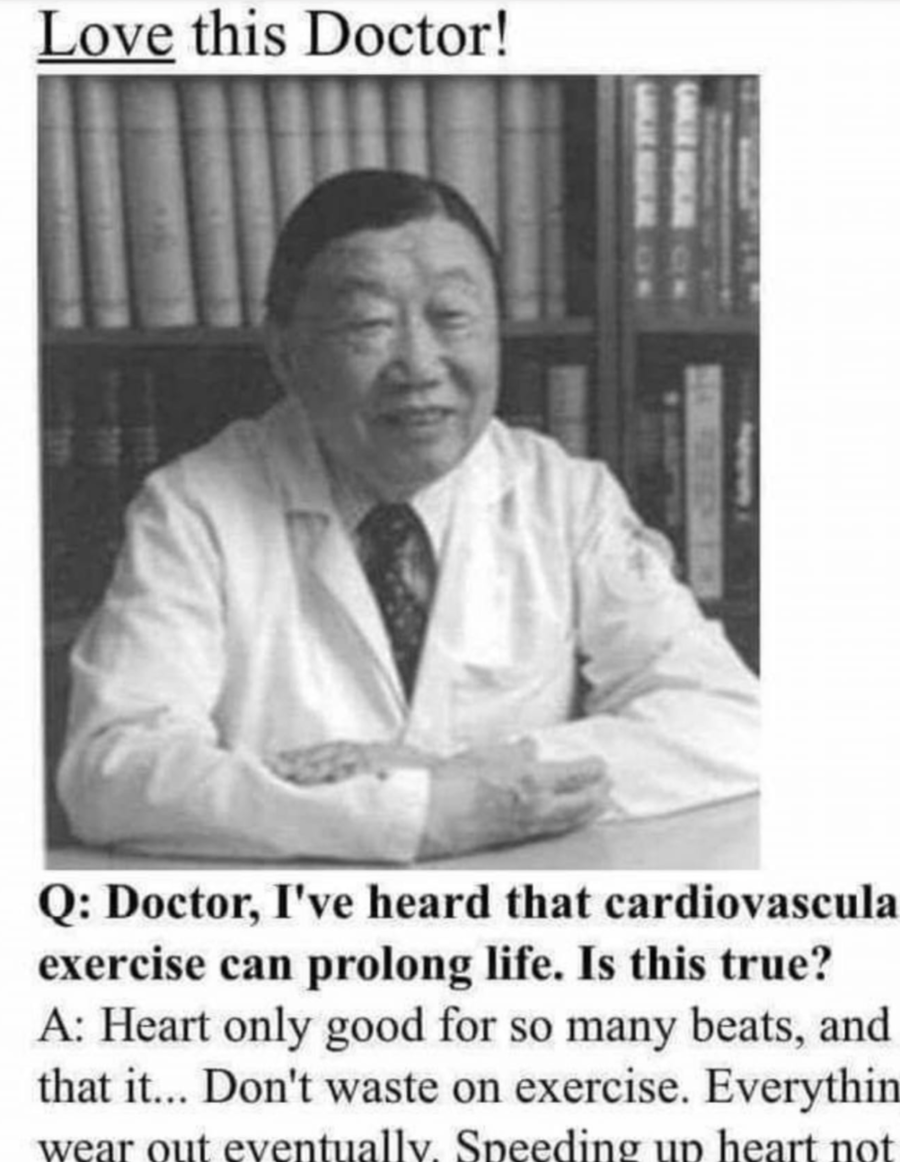 The meme is recycled satirical internet humor and has appeared online since at least 2009, as seen here (archived here). Although Lead Stories could not identify the "doctor" in the picture, his image has been used in the claim's various iterations for years.

The claim that a human heart has a predetermined number of beats in a lifetime is unfounded. Instead, research has shown that the heart does not stop beating because it has reached its limit of heartbeats; rather, it stops beating because it weakens. Although exercise does lessen the body's glycogen stores, that energy is restored through proper intake of food and water.

In an email to Lead Stories on February 9, 2022, the American Heart Association referred us to several resources that explain the purpose of exercise for overall health. For example, an article titled "American Heart Association Recommendations for Physical Activity in Adults and Kids" explains that aerobic exercise increases one's heart rate and "benefits [the] heart by improving cardiorespiratory fitness." Another article titled "Why is physical activity so important for health and well-being?" explains:

Without regular activity, your body slowly loses its strength, stamina and ability to function properly. It's like the old saying: you don't stop moving from growing old, you grow old from stopping moving. Exercise increases muscle strength, which in turn increases your ability to do other physical activities.

While there is a link between heart rate and health, the heart does not operate like a non-rechargeable battery. Incorporating an exercise routine typically increases the chances of living a longer and healthier life.