Did Melania Trump "break up" with Donald Trump, or dump him, as announced in the title of a video? No, that clickbait headline is not supported by the news story it was based on. In the video the narrator, Christo Aivalis, discusses his take on a recently announced arrangement between Melania Trump and the social media platform Parler. He says the former first lady's arrangement with Parler may hurt Donald Trump just as much as an actual divorce would because Donald Trump also plans to start a social media platform. The video's attention-grabbing headline is stated as a fact, but the video does not provide any evidence that the Trumps have broken up. Aivalis' opinion about the social media platform situation does not mean there was a breakup.

The claim appeared as the headline on a video published with Facebook livestream by Adela News on February 11, 2022. The video has this title and caption:

Trump Wife Melania BREAKS UP with HIM 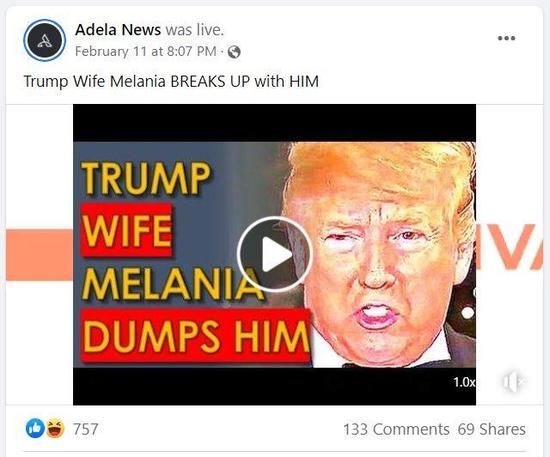 Nothing in Aivalis' video presents any evidence of a breakup between Melania and Donald Trump. Reading from a newyorkpost.com article, Aivalis says the announcement from Parler is "unambiguously humiliating" for Donald Trump. The New York Post said it was "unclear" what Melania Trump's decision to make this arrangement with Parler would mean for Donald Trump's Truth Social Network when it launches. The February 9, 2022, news update from Parler said in part:

Parler announces that the Former First Lady, Melania Trump, has engaged Parler in a special arrangement for her social media communications. Mrs. Trump can be found at parler.com/MelaniaTrump, or by searching Parler for the username MelaniaTrump.

Mrs. Trump launched her blockchain technology and non-fungible token (NFT) platform, MelaniaTrump.com, in December 2021. Parler is powering her platform. Mrs. Trump and Parler have found synergy in the shared desire to embrace Web3 technology. As part of the synergistic relationship, Mrs. Trump will share exclusive communications on Parler.

Melania Trump currently has social media accounts on several platforms in addition to the account on Parler. On February 12, 2022, days after Parler posted the announcement about their arrangement with Melania Trump that she would share "exclusive communications" on Parler, she has used at least three of her social media accounts (Twitter, a second account on Twitter and Facebook) to post an identical response to reports that the charity Fostering the Future was not registered with the state of Florida. She did not post this response on Instagram or on her account on Parler.

Aivalis seems to think the phrase "exclusive communications" means that Melania Trump will only communicate from Parler. Her February 12, 2022, posts on Twitter and Facebook show that is not the case. 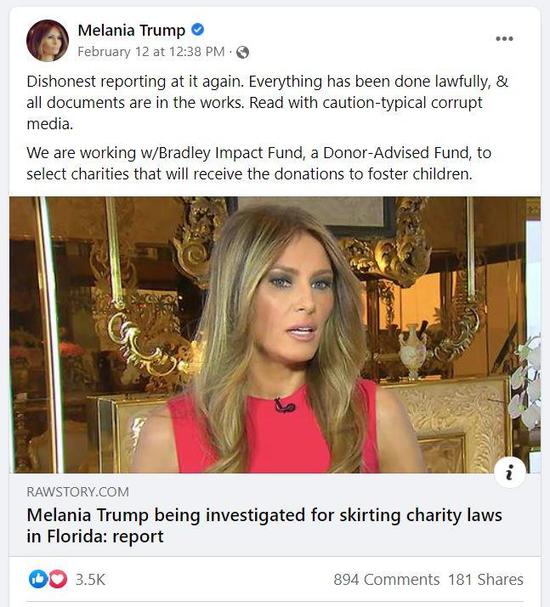 The Facebook page Transparency Report for Adela News shows page managers located in Vietnam and Indonesia. The content of Adela News consists of videos that were uploaded from other places and then streamed on the Adela News channel as if "live." The channel also posts articles that link to the website techviewnews.com. The headlines and body of these plagiarized articles are written in a homoglyph text to evade detection. Lead Stories has written about other pages using similar deceptive engagement tactics in the past.