Did Britney Spears say, "I have cancer"? No, that's not true: The pop singer never said that she had cancer. The false headline is being used as clickbait to a link to a tabloid website where a post talks about the abuse she suffered under her conservatorship. She had made a reference to cancer, but she did not say she was diagnosed with it.

The claim appeared as a Facebook post (archived here) on February 11, 2022, under the title "#BreakingNews 'I Have Cancer.'" It opened: 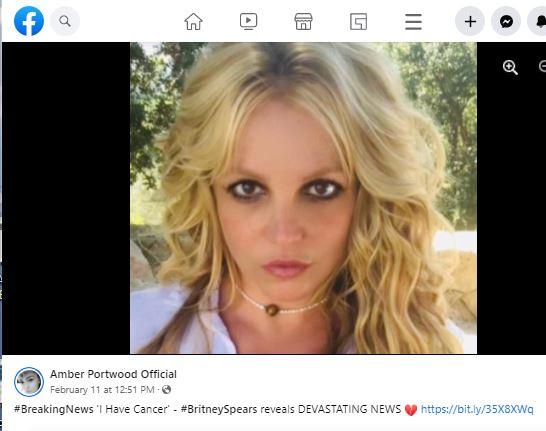 Amber Portwood is a star on the MTV show "Teen Mom." The link she shared with the picture of Spears leads to an article on tabloid website Celebuzz titled, "BRITNEY SPEARS CLAIMS FAMILY FORCEFULLY MADE HER ILL" This is a recap of a post Spears shared on her Instagram revealing details of the treatment she received while being forced against her will into a rehab center.

Spears does not ever say "I have cancer," just that she was so confused by her treatment that she felt as if a secret diagnosis was being kept from her. What she actually wrote was:

I've learned through this that being kind is wonderful ... but sometimes with serious responsibility being kind is worse than two cents ... but I couldn't get angry or scream or anything !!! I felt suffocated !!! At one point I thought ... wait do I have cancer and they don't want me to know and this is some secret therapy for people with cancer ???