Did a large group of Amish people in Manitoba, Canada prepare a barbecue supper for 800 people to support the "Freedom Convoy" and was this plan disrupted by Winnipeg police? That's partially true: But this photo does not show that event and the people were not Amish. The story that was added to this unrelated photo has some basis in fact, but the people who planned to feed the truckers were Hutterites.

The photograph of a line of buggies is unrelated to the barbecue dinner. The picture was snapped by photographer Michelle Graham on Sunday morning, January 16, 2022, in Ontario, Canada. She identified the people in her photo as Old Order Mennonites headed to church.

The truckstop dinner hosted by Hutterites took place more than a week later, in Kenora, Ontario on January 25, 2022. Vlogger and trucker convoy organizer "The Real Pat King" posted a live video broadcast on Facebook and told the backstory of the relocated barbecue. Other posts told the story with text but misidentified the people who were serving the dinner as Amish. A photo of horse-drawn buggies was added to illustrate the story without securing permission from the photographer. One example of that is a post published on January 29, 2022, with this caption:

'...great story about the Amish...when the convoy came through my home town of winnipeg Manitoba Canada..the amish were there to greet the truckers with a full bbq supper for 800 people..but when the Winnipeg police would not let the convoy stop at the desired location the amish packed up their barbecues and food hopped in their trucks and drove 2.5 hours with the convoy to cook them food at the next stop...all in -30 degree weather..true Patriots of freedom...just thought i would share that.'

Amish, Mennonites and Hutterites are all Anabaptist groups, but the names are not interchangeable. Their beliefs and practices can vary greatly even within different communities in the same group.

The photo of the buggies was posted to Facebook and Instagram by photographer Michelle Graham on January 17, 2021. She updated her post with an additional message after the hijacked and miscaptioned photo went viral:

These photos are of Old Order Mennonites headed to church. Anyone stealing these photos for other purposes would be best served to NOT do it.

Thanks! (sorry all, but my pics are being stolen to post false news on other sites for political purposes)

Pat King, who is an organizer with the Freedom Convoy, live streamed a video from Kenora, Ontario and told the story of the dinner. Several colonies of Hutterites were originally going to serve the dinner at the Flying J truckstop in Headingley on the outskirts of Winnipeg, Manitoba. He said the Royal Canadian Mounted Police would not let the trucks in. The Hutterites then loaded their gear in large enclosed trailers and moved the whole barbecue dinner several hours away to Kenora, Ontario. This transcript is from the livestream starting at 0:18 seconds:

This is how amazing this is how absolutely amazing these people are. I want to show each and every one of you something. You saw what happened at Headingley. You saw what happened. We love the support, we love the crowd but the RCMP will not let us in. We had a big meal all planned already. We had 25 colonies came in. They're coming in to cook a supper. Well guess what? They drove all the way from Winnipeg with us to Kenora and they are making us dinner. The dinner that we missed and I want to say thank you so much, you guys. (No problem.) Thank you so much. And that smells delicious. Look at this. Wow. Look at that guy. Go. Look at that. That is absolutely phenomenal. 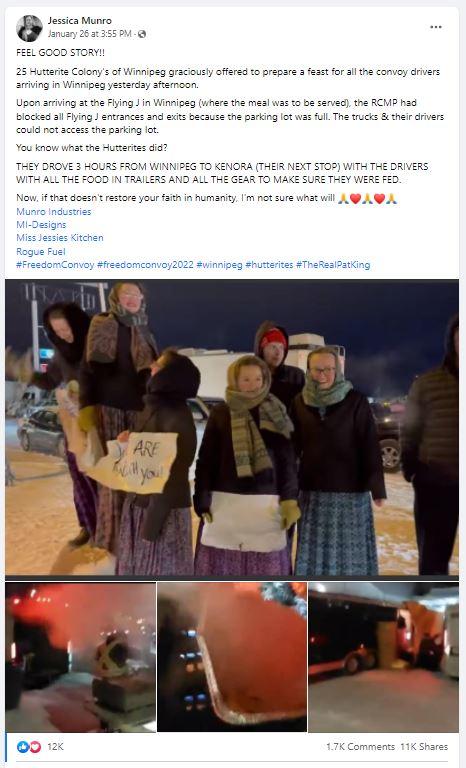 Lead Stories wrote about Pat King in August 2021. When COVID-19 restrictions were lifted in Alberta, King claimed that it was his subpoena to the provincial health minister that forced them "to admit that COVID was a hoax." King's unsuccessful court case and the lifting of the restrictions were not connected except by coincidental timing.