Did Johns Hopkins University confirm you can be vaccinated with a COVID-19 PCR test, even without knowing it? No, that's not true: Johns Hopkins Medicine says details about one of its devices have been "inaccurately used for disinformation purposes," the device "has not been approved for use in humans" and has neither been "tested nor used for vaccine delivery."

The claim appeared in an article (archived here) published by drleonardcoldwell.com on April 13, 2021, titled "Johns Hopkins University confirms: You can be vaccinated with a PCR test, even without knowing." It opened:

Meanwhile, resistance is forming even within the orthodox medical establishment. But the masterminds of the WHO continue to insist on an unrealistic vaccination coverage rate of at least 70 percent. 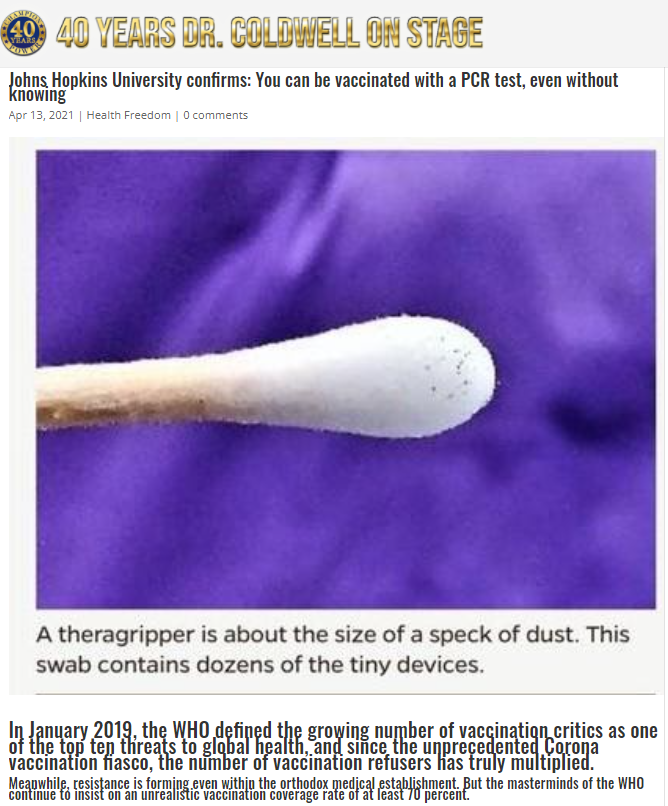 The drleonardcoldwell.com article delves deep into speculation with its claim that COVID PCR tests can be used to vaccinate people, even without their knowledge. This is what the article says:

Now several experts and former mainstream journalists like John O'Sullivan are warning that the massive PCR testing campaign could be a WHO vaccination program in disguise. (see Principia Scientific) O'Sullivan is referring to a new technology developed at Johns Hopkins University that is supposed to make it possible to carry out covert vaccinations through a PCR test. (See Johns Hopkins Universitiy)

The PCR test has been the gold standard test for diagnosing COVID since it was authorized for use in February 2020, according to the Cleveland Clinic. Samples are collected from the nose or throat using a swab:

What is a PCR test?

PCR means polymerase chain reaction. It's a test to detect genetic material from a specific organism, such as a virus. The test detects the presence of a virus if you have the virus at the time of the test. The test could also detect fragments of the virus even after you are no longer infected.

Concern is growing that an innovative nanotech device developed at Johns Hopkins University may be used to secretly deliver the COVID19 vaccine to those people who are 'vaccine hesitant.'

Certainly, the technology is real, but is their any merit to such a claim?

It warns that the WHO may see the technology as a way around vaccine hesitancy:

But all such reluctance against the COVID jab will be in vain if a vaccine can be delivered by stealth merely when anyone takes the now ubiquitous PCR swab test ... . The claim is that the dust-sized 'theragrippers' can be implanted in the tips of PCR test swabs and be delivered to the innocent 'victim.'

Theragrippers are experimental technology being developed by scientists at Johns Hopkins. The tiny, star-shaped microdevices could be a way to release drugs into the body. They were part of a study on animals published in October 2020 in the journal Science Advances. There is no mention of PCR testing in the study. Johns Hopkins Medicine released a statement to Lead Stories in a February 4, 2022, email:

An article published by Johns Hopkins Medicine in November 2020, has been inaccurately used for disinformation purposes during the pandemic.

The article described small devices known as 'theragrippers' that are deployed to the intestines via an endoscope. When these dust-sized devices reach a certain temperature, they latch onto tissue and release the medicine that has been loaded onto them. This nanotechnology has shown promise in a laboratory setting. However, it is still in its infancy and has not been approved for use in humans.

Theragrippers have been neither tested nor used for vaccine delivery.