Does this screenshot of a WhatsApp post convey important information to avoid sudden death at night? No, that's not true: This advice -- that sitting up or standing up suddenly in the middle of the night could cause sudden death -- was retracted and corrected by the doctor whose name appears in the screenshot. While Dr. Sushma Pal revised her post on Facebook in early 2020, screenshots of the old post continue to circulate.

The text in this post has been copied many times and dates back to at least 2016. The account @drsushmapalindia made such a post on September 6, 2019, and amended it after a fact check was published. A screenshot of the original post was circulating on WhatsApp and posted on Facebook on February 8, 2020. The post was captioned:

Definitely believe this is something that could be true. I am very cautious about info on this here internet, but I know from personal experience that the brain is lacking sufficient blood supply when I wake up, so just spreading this bc why not be careful 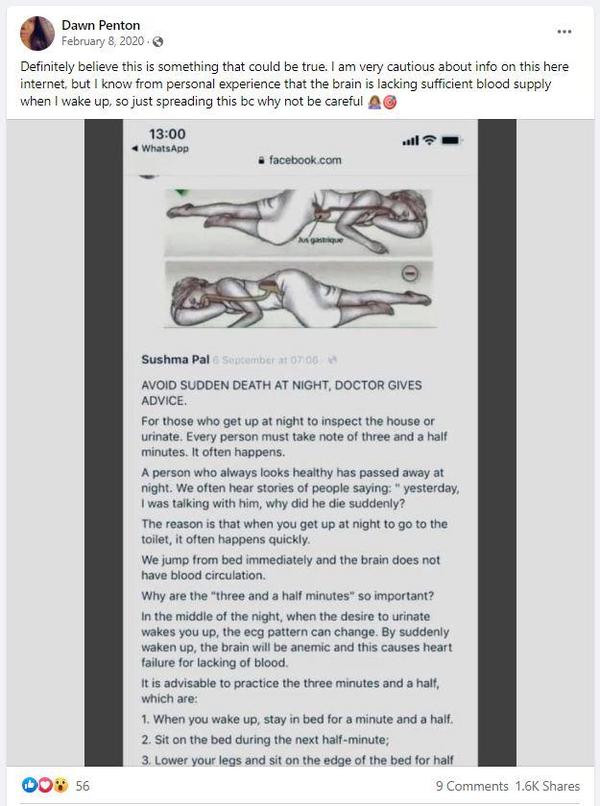 The screenshot includes a medical illustration of a reclining woman. The illustration is unrelated to the narrative of the post's text other than showing a person sleeping. The original role of the illustration, before it was repurposed, was to show the anatomy of the stomach and esophagus to illustrate how sleeping on the left side as opposed to the right will help avoid or minimize gastric reflux. The illustration's text, in French, says, "gastric juice."

The text captured in the screenshot begins:

For those who get up at night to inspect the house or urinate. Every person must take note of three and a half minutes. It often happens.

A person who always looks healthy has passed away at night. We often hear stories of people saying: ' yesterday, I was talking with him, why did he die suddenly?'

The post goes on to describe a 3½-minute routine a person should do before standing up to avoid sudden death, purportedly caused by depriving the brain and heart of blood. This "doctor's advice" was fact-checked by several outlets including factcheck.afp.com and aap.com.au (Australian Associated Press). On January 2, 2020, the post in the screenshot was edited to add information from a September 26, 2019, politifact.com fact check. This is how the now-edited post appears at the time of writing: 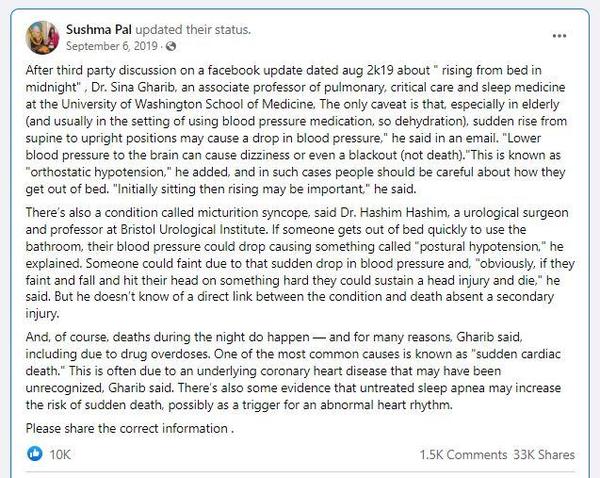 Sushma Pal revised the post to include the information provided by two doctors who were quoted in the Politifact fact check:

After third party discussion on a facebook update dated aug 2k19 about ' rising from bed in midnight' , Dr. Sina Gharib, an associate professor of pulmonary, critical care and sleep medicine at the University of Washington School of Medicine, The only caveat is that, especially in elderly (and usually in the setting of using blood pressure medication, so dehydration), sudden rise from supine to upright positions may cause a drop in blood pressure,' he said in an email. 'Lower blood pressure to the brain can cause dizziness or even a blackout (not death).'This is known as "orthostatic hypotension," he added, and in such cases people should be careful about how they get out of bed. 'Initially sitting then rising may be important,' he said.

There's also a condition called micturition syncope, said Dr. Hashim Hashim, a urological surgeon and professor at Bristol Urological Institute. If someone gets out of bed quickly to use the bathroom, their blood pressure could drop causing something called 'postural hypotension,' he explained. Someone could faint due to that sudden drop in blood pressure and, 'obviously, if they faint and fall and hit their head on something hard they could sustain a head injury and die,' he said. But he doesn't know of a direct link between the condition and death absent a secondary injury.

And, of course, deaths during the night do happen ⁠-- and for many reasons, Gharib said, including due to drug overdoses. One of the most common causes is known as 'sudden cardiac death.' This is often due to an underlying coronary heart disease that may have been unrecognized, Gharib said. There's also some evidence that untreated sleep apnea may increase the risk of sudden death, possibly as a trigger for an abnormal heart rhythm.