Did a meteorologist in Oregon "admit the military was spraying chemtrails" while giving an evening weather forecast on television? No, that's not true: Weatherman Kevin Lollis pointed out an area on the weather radar map that he identified as chaff from a military exercise. He did not say the military was spraying chemtrails; he said they were dropping chaff, which he went on to describe. The existence of chaff and its defensive purpose, as a military countermeasure to hide aircraft from radar, is not a military secret. Various types of chaff have been in development since before World War II.

The video of News 10 meteorologist Kevin Lollis' April 8, 2010, forecast was reposted on YouTube the following day. A shortened clip of the old weather forecast resurfaced when the video was posted on Facebook on January 12, 2022. The caption added to the video reads:

The clip posted to Facebook is 30 seconds long and cuts off abruptly before Lollis explains his Marine Corps experience. Embedded below is a more complete copy of that April 8, 2010, KTVL weather segment. Lollis does not use the term "chemtrails" or "spraying." After the 1:00 mark he explains:

We've got a bit of an unusual situation. Now, this first portion of the radar cycle is fairly bland and typical. But then you see these bands have very distinct cloud cover moving into the region. That is not rain, that is not snow, believe it or not, military aircraft flying through the region is dropping chaff ... small bits of aluminum, sometimes it's made of plastic or even metallic, metallicized paper products, but it's used as an anti-radar issue and obviously they're up there practicing. They won't confirm that, but I was in the Marine Corps for many years and I'll tell you right now that's what it is.

The use of chaff is not a military secret. In August 2002, the Air National Guard published a study titled, "Final Environmental Assessment for Deployment of Chaff and Flares in Military Operation Areas." This document is over 500 pages long and includes reports from specific Military Operation Areas (MOAs). On page 13 of the document, chaff is described this way:

Chaff has been used by DOD for over 50 years, both in combat and in training and testing. Chaff consists of small, extremely fine fibers of aluminum or, since the 1980s, aluminum-coated glass. These fibers disperse widely in the air when ejected from the aircraft, forming the electromagnetic equivalent of a visual smoke screen to temporarily hide the aircraft from radar. It also decoys radar, allowing aircraft to maneuver or egress from the area. In the air, the initial burst from a chaff bundle forms a sphere that shows up on radar screens as an electronic cloud. The aircraft is obscured by the cloud, which confuses enemy radar. Because chaff can obstruct radar, its use is coordinated with the Federal Aviation Administration (FAA).

This report does not include an illustration of chaff. 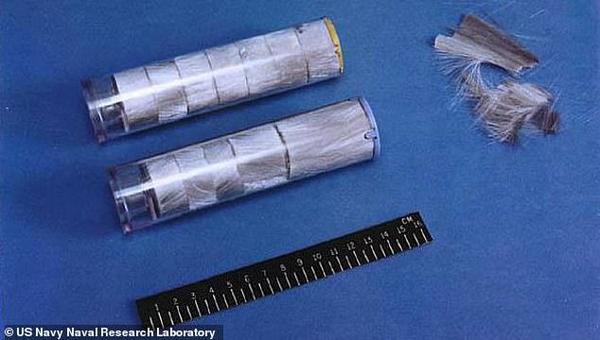 The Air National Guard's report findings and conclusions are on pages 227-30. They say in part:

No significant impacts to human health are expected. Chaff particles are not expected to break down to respirable sizes in any appreciable quantities and the aluminum and silicon that make up chaff particles have low toxicity when either inhaled or ingested. Estimated total annual emissions of chaff by the military, worldwide, for both operational and training purposes is similar to the annual primary particle emissions from a single coal-powered generating station. The risk of exposure for humans to materials in flares is considered negligible because the primary component, magnesium, is not very toxic and the majority of the magnesium burns up before it reaches the ground.

Lead Stories has debunked a different claim on a viral photo that was identified as a ceremonial "Angel Flight" but was simply the smoke pattern from decoy flares. Lead Stories also reviewed a collection of photos and identified the aviation equipment that was misrepresented as proof of "chemtrail spraying."