Were Russian and Ukrainian soldiers filmed dancing together, and is this evidence that there is no conflict between Russia and Ukraine and that the Russian army is actually in Ukraine to battle the Deep State? No, that's not true: This video showing unidentified soldiers dancing was posted online on February 18, 2022, a full week before Russia launched its attack on Ukraine. There is no evidence that any of the dancers were Ukrainian soldiers.

The video was posted on Instagram on February 18, 2022, by the Crimean news channel @chp.crimea, and began to circulate in English-speaking social media circles a week later. One example is an article (archived here) where a Telegram post was embedded as a blog entry. It was published by conspiracy theorist simonparkes.org on February 24, 2022. It opened:

RUSSIAN & UKRAINE SOLDIERS ARE DANCING TOGETHER

This is not one army attacking another army. This is Russian forces taking out Deepstate/cabal

This is how the blog appeared at the time of writing: 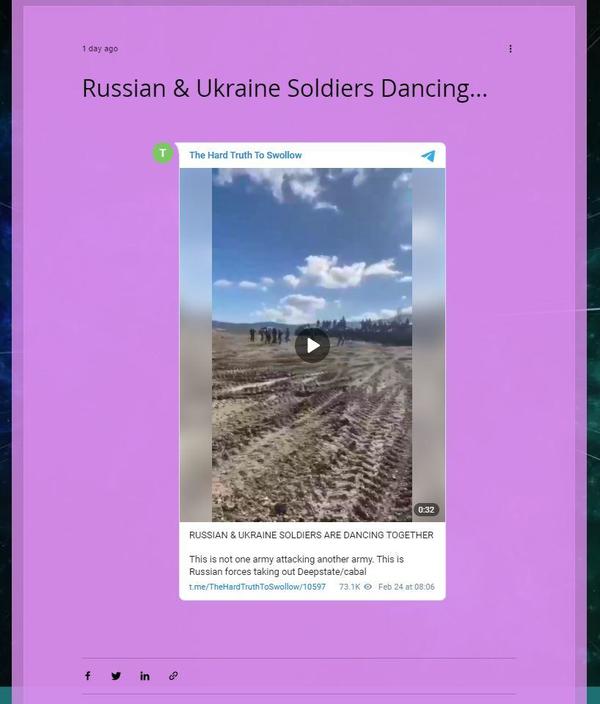 The caption of the earliest edition of this video Lead Stories was able to locate, by the news channel chp.crimea on February 18, 2022, was:

This is how all peoples in Russia should live together, and the enemy is not terrible 👻 📍

Two Crimean news websites, crimea-news.com and crimea.kp.ru, featured this video on February 18, 2022, with a write-up that tells its background story. That information is unverified, but nowhere does it suggest that there were Ukrainian soldiers involved in the dancing, which would have taken place at least a week before Russia invaded Ukraine. The translation of the article says:

A few days ago, planned tactical exercises of the Southern Military District ended in Crimea. At the training grounds of the peninsula, they trained to destroy helicopters, armored vehicles, ground targets and manpower of a mock enemy.

Of course, representatives of different nationalities gathered on the peninsula. Part of the armed formations arrived from South Ossetia and Dagestan. Apparently, after intensive training of tactical skills, the military decided to take a break and started dancing. First, one soldier, and then other guys, began to dance together the national Caucasian dance - lezginka. It was, according to eyewitnesses, in the village of Podgornoye, Bakhchisarai region of Crimea.

The article does not describe opposing armies coming together -- rather it describes the gathering in Crimea of Russian troops and Russian allies from distant regions. The Republic of South Ossetia is a territory recognized as independent by Russia in 2008, but not by Georgia. Dagestan is located at the southernmost tip of Russia on the Caspian Sea and is a republic of Russia. Lezginka is sometimes used as an umbrella term for all the highland Caucasian folk dances.