Are electric vehicles (EVs) bad for the environment? Yes, that's partially true: Two experts in the field have looked over the claim for Lead Stories and come to two different conclusions. One believes the claim is accurate, while the other says that while parts of it are true, other parts were false and misleading. Some parts of the claim may create a mistaken impression if you don't know what scientists and experts in the EV field are trying to do to mitigate the environmental costs of creating EVs.

Going 'Green' isn't what you think it is. So after you read this and drive your 'better for the environment' electric car you'll know where is really comes from and it's not as green as you think..... 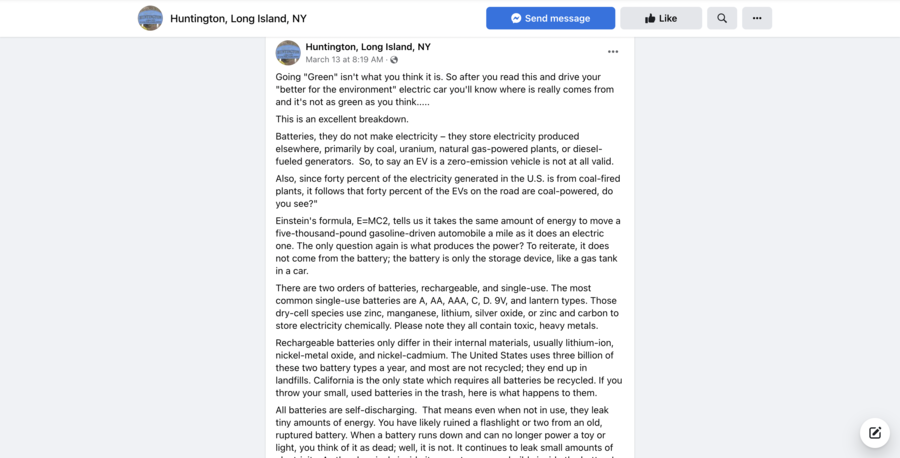 The post describes "green" alternatives as being worse for the Earth than having a gasoline-powered vehicle.

We spoke to two experts about this.

John Heywood, a professor of mechanical engineering emeritus at the Massachusetts Institute of Technology, told Lead Stories in a March 17, 2022, email that overall the Facebook post is accurate:

My area is vehicle propulsion and I've worked in detail on the question you are reviewing. Currently, the average US automobile's greenhouse gas emissions on a full life-cycle analysis basis (includes resource extraction and production, vehicle and propulsion system manufacture, production of the fuel used, chemical energy in the fuel used driving, allowing for vehicle material recycling at end of life), in grams of CO2 per mile, is about half that of a gasoline engine equivalent vehicle. Washington State (the cleanest electricity) its lower (about 30%); in the industrial mid-west a battery electric and gasoline vehicle where significant coal is used to generate electricity, the emissions are comparable. Also, the extraction of the special elements now essential for automobile batteries create other hazards (some environmental).

Jeremy Michalek, director of the Carnegie Mellon Vehicle Electrification Group, in a March 17, 2022, email, broke down the post to respond to each part of the claim separately. Some of the following are direct quotes from the Facebook post; others have been shortened for brevity:

Claim: Batteries "store electricity produced elsewhere, primarily by coal, uranium, natural gas-powered plants, or diesel-fueled generators. So, to say an EV is a zero-emission vehicle is not at all valid."

Claim: Since 40% of the "electricity generated in the U.S. is from coal-fired plants," 40% "of the EVs on the road are coal-powered."

This is incorrect for a couple of reasons, but the main point has some truth. First, in 2021 coal was 22% of generation, not 40%. Second, if coal is x% of generation, it does not follow that coal is x% of EV charging. It depends what time EVs charge and which plants respond to changes in load. We've written a lot about this.

However, it is fair to say that a lot of EV charging electricity comes from coal, both in the US and internationally.

Claim: "Einstein's formula, E=MC2, tells us it takes the same amount of energy to move a five-thousand-pound gasoline-driven automobile a mile as it does an electric one. The only question again is what produces the power? To reiterate, it does not come from the battery; the battery is only the storage device ..."

This statement is confused. E-MC2 is not relevant to this question. It is true that moving a 5000 pound truck takes the same amount of energy regardless of the power source, but it really matters how efficiently each energy source can be converted into motion. Most energy in gasoline is lost to heat in combustion, whereas most energy stored in batteries is converted to vehicle motion.

Claim: "There are two orders of batteries, rechargeable, and single-use. The most common single-use batteries are A, AA, AAA, C, D. 9V and lantern types. Those dry-cell species use zinc, manganese, lithium, silver oxide, or zinc and carbon to store electricity chemically. Please note they all contain toxic, heavy metals."

Ok, but single-use batteries (they are called 'primary batteries') are not relevant for vehicle applications.

Claim: The U.S. uses 3 billion of these two battery types a year, and most end up in landfills. California is the only state that requires that all batteries must be recycled.

It's true that all batteries are self-discharging, but the failure mechanisms for EV batteries generally do not involve leaking fluids. They are different from flashlight batteries.

I don't have the numbers on hand to check the claims here, but anyway these numbers depend a lot of the specific battery design. For example, some Li-ion battery chemistries use no cobalt at all. Others use no manganese. Chapter 5.3 in this recent National Academies report has some details, and there's a simple table on Wikipedia here.

Claim: "Sixty-eight percent of the world's cobalt, a significant part of a battery, comes from the Congo. Their mines have no pollution controls, and they employ children who die from handling this toxic material. Should we factor in these diseased kids as part of the cost of driving an electric car?"

The issues with Congo as the primary supplier of cobalt are well known and are one of the motivations for producing cobalt-free battery designs.

Claim: The construction of solar panels and windmills is disastrous. The main problem with solar arrays is the chemicals needed to process silicate into the silicon used in the panels. It requires hydrochloric acid, sulfuric acid, nitric acid, hydrogen fluoride, trichloroethane and acetone. They also need gallium, arsenide, copper-indium-gallium-diselenide and cadmium-telluridem, which are extremely toxic. Silicon dust is toxic to workers and panels cannot be recycled. Windmills needs 1,000 tons of hard-to-extract minerals and we cannot recycle the blades.

Claim: "There may be a place for these technologies, but you must look beyond the myth of zero emissions."

This is true. Most activities have some emissions consequences. But on balance, emissions from wind and solar resources, including construction emissions, are much lower than emissions from fossil generation. Emissions from battery production are significant, but when EVs get their energy from clean sources like wind and solar, their overall life cycle emissions consequences are much lower than gasoline vehicles. As the power grid moves toward cleaner sources like wind and solar, the life cycle emissions of electric vehicles (including all of the factors mentioned above) improve. We have done a ton of work on this, including way back to this study accounting for many of these factors.

Claim: "'Going Green' may sound like the Utopian ideal but when you look at the hidden and embedded costs realistically with an open mind, you can see that Going Green is more destructive to the Earth's environment than meets the eye, for sure."

It is correct that there are environmental implications to all pathways, and they should be considered against the potential benefits of each pathway. It is commonplace in academic research and in government to consider all of these factors in a comprehensive life cycle assessment in order to understand the costs and benefits of alternative technologies and pathways. The factors brought up in this post are well understood and considered as part of tradeoffs when considering the benefits and costs of technology and policy options, including vehicle electrification.