Did George Orwell say or write: "The further a society drifts from truth the more it will hate those who speak it"? No, that's not true: Orwell never said this. The quote is from a freelance writer named Selwyn Duke, who coined it in a 2009 piece about the banning of conservative author Michael Savage from Britain.

The meme attributing the line to Orwell appeared in an Instagram post (archived here) by Tulsi Gabbard, a former U.S. representative of Hawaii's 2nd Congressional District, on March 17, 2022. The post reads:

The further a society drifts from truth the more it will hate those who speak it. 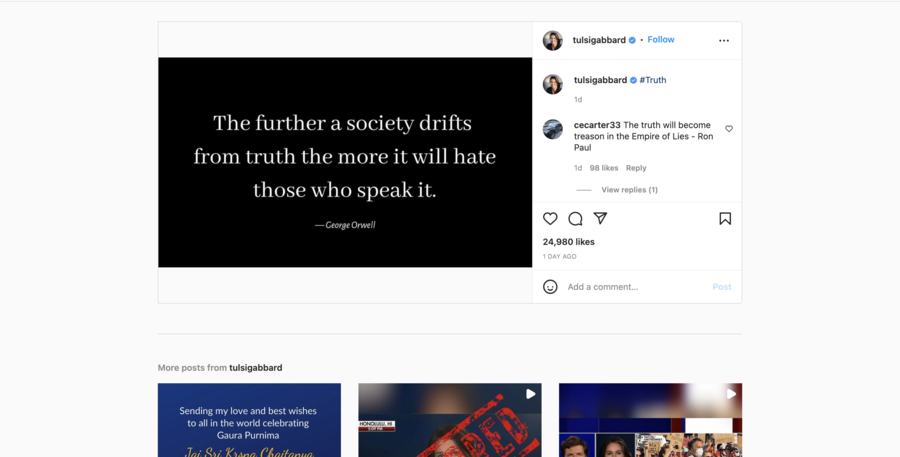 Lead Stories did not find the quote in the College of London's George Orwell Archive here.

The quote originated with Selwyn Duke, a freelance writer. Duke's Twitter bio describes him as a "Sojourner on the blue orb, philosopher king, teller of Truth and leftists' worst nightmare." In an email on March 18, 2022, Duke confirmed that he is the author of the quote.

Snopes, the original fact check agency has also tracked the quote to Duke. Snopes noted that in an article titled, "George Orwell is stealing my work" in American Thinker, Duke addresses the mixup:

A few years ago, I read a 'George Orwell' quotation that had begun to gain some currency: 'The further a society drifts from truth, the more it will hate those who speak it.' The problem is, Orwell never said it. And I ought to know.

Because I said it.

I originated the saying - and it's safe to aver that it has achieved saying status - in my 2009 piece "Stopping Truth at the Border: Banning Michael Savage from Britain." So you can imagine my surprise when I learned people were quoting it and that Orwell was taking credit for it.

Here is another Lead Stories article about a quote falsely attributed to Orwell.