Was the existence of reptilian aliens living in underground bases confirmed by retired Romanian Gen. Emil Strainu? No, that's not true: Contrary to its headline, this article does not mention underground bases, and there is no evidence presented to confirm that claim. The body of the article is a recycled, translated and abbreviated copy/paste derived from a forward Strainu wrote for a Romanian book published in 2010.

The tale described in the forward is unconfirmed. It is Strainu's retelling of a purported first-person sighting of some large reptilian beings by an anonymous but purportedly respected military acquaintance of Strainu's.

The story from the anonymous friend was retold by retired Romanian general, politician and ufologist Emil Strainu in a book forward published in Romanian in the 2010 book "An.unnak.ki versus An.nunak.ki" by Aryana Havah. The text of this forward has been circulated in different languages by conspiracy and paranormal websites for over a decade. One example is an article (archived here) published by online-updates.net on March 21, 2022, under the title "The Existence Of Reptilian Aliens Is Confirmed by a Romanian General: 'Reptilians Live in Underground Bases.'" It opened:

General Strainu of the Romanian Army is a former counterintelligence officer who hunted CIA and KGB operatives in Romania before 1989. Romania has been a full NATO member and a staunch ally of the United States since 2004. General Strainu is also a radiolocation expert and a doctor in geophysical warfare.

General Strainu had access to some of the cold war's most dangerous secrets, as well as classified knowledge about UFOs and aliens. 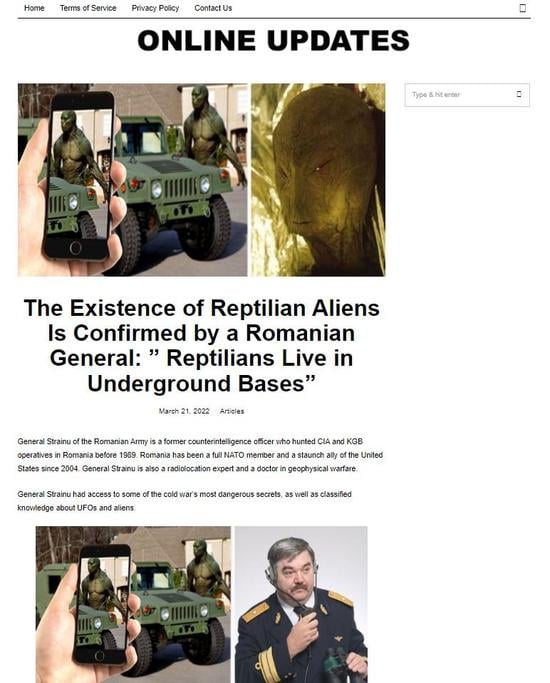 Strainu's good friend, an active Romanian Colonel who is now a NATO colonel, called him to tell him a story of an unintentional encounter with a reptile. As a side note, this Colonel has served in Iraq, Afghanistan, Africa, and South America, and he has begged Strainu to keep his identity private because he is still active.

Portions of the forward omitted from the online-updates.net article include details about purported problems this friend had recording evidence and finding additional witnesses, which was a great disappointment to both of them as they had no evidence to back up the claim.

Strainu is a real person. He was elected and served as president of the Romanian nationalist political party, Greater Romania Party (Partidul România Mare) or PRM, from 2015 to 2016 after the death of the party founder. He also founded the Association for the Study of Unidentified Aerospace Phenomena - Romania (ASFAN). Strainu is not currently listed on the website in an administrative role.

The ASFAN website has published the story of an unusual sighting of a metallic flying object that Strainu reportedly witnessed and that was purportedly observed by multiple radar stations in 1984. Despite the number of witnesses and taped record of the incident, this "special moment" was not sent "upwards" in the chain of command and the tapes were not preserved.

Strainu's unconfirmed anecdote in the forward is about Anunnaki sighted in a Hummer at a gas station near Bucharest. (Anunnaki were historically the deities of ancient Sumerian mythology. In modern conspiracy theory lore, they are frequently characterized as an extraterrestrial reptilian master race.) It's not on the ASFAN website, which collects eyewitness accounts of aerospace phenomena -- perhaps reptilian entities are out of scope.

The forward can be found in Romanian on pages 3-5 of this document. The most complete translation in English that Lead Stories found online was published on soul-guidance.com.

A friend who had been camping alone in the Retezat mountains in Romania had to stop for gas on his way home just before arriving in Bucharest at 5 or 5:10 a.m. This trip would take almost six hours according to Google Maps, so it would follow that the friend had been driving since about midnight -- before he spotted the 2-meter-tall (6½-foot) irritated reptilian get in and out of a Hummer at the gas station.

One paragraph in the story omitted from the online-updates.net article explains why the gas station sighting wasn't caught on camera:

My friend was looking to see if anyone had also witnessed the event but found himself alone in the parking lot of the gas station. He noticed that there was a video camera at the entrance, so he asked the one who was behind the counter if it worked. The clerk responded that the video camera is just for decor! Perplexed, he thought it could be a well-orchestrated joke, and he continued his journey. But things did not stop here.

The story says the friend encountered the same Hummer pulled over again. Two reptilian occupants had gotten out of the vehicle and seemed to be arguing on the side of the highway. One had a tail. Drivers of other cars and trucks were purportedly shouting at the sight, but did not stop. The friend watched for three to five minutes and took photos. As soon as he arrived back in Bucharest he excitedly phoned Strainu for advice -- but:

The tragic part of the story is that when I saw the phone, it was clear that 11 photos had been taken, but they all turned out green. The screen was green. No images! I was with him at the phone service company's office whose only answer was that a very bright green light source was photographed! I could not recover anything that was photographed. We were greatly disappointed, but I can tell you that for two weeks I've have listened to the story a dozen times. I have looked for other witnesses, but everything turned out to be a total failure.

While an entertaining story, it is unconfirmed. There is no evidence or corroborating eyewitnesses, nor does the story have any proof of underground bases where reptilian aliens are living.

In a 2012 romaniatv.net article titled, "Candidate Talks: Aliens are among us," Strainu did not back down from his supernatural claims, but he did admit that he was not against making a scene for publicity:

The prospects of the show were bleak, given that Străinu confessed that he appeared in the 'profane' press, unusual for ufological research, in order to draw attention to his candidacy. 'Given that we at PRM do not have much campaign money, we conducted an interview that we conducted in such a way as to attract attention (...) The soul of trade is advertising, the soul of advertising is scandal and now you have a small scandal,' said Străinu.