Did Russian troops in Kherson find pre-made Ukrainian medals "For the Taking of Crimea" when they captured a Ukrainian military facility at Kherson? No, that's not true. The photos circulated by the Russian news media and social media users show crude forgeries. Ukrainian officials pointed out mistakes in the "award documents" and errors in the design of the "award", which does not match military honors bestowed by Ukraine. The photos of the medals were circulated March 24, 2022 by several Russian media outlets, including mk.ru and gazeta.ru. A similar English language claim was made in a March 24, 2022 Facebook post (archived here) on the Russia Truth page under the title "Medals "For the Capture of Crimea" found in Ukraine". It opened:

In the military registration and enlistment offices of the Kherson region, Ukrainian medals "For the capture of Crimea" were found. Apparently, they were supposed to be awarded to the Ukrainian military after the attack on the Crimea and Donbass, which was planned to be carried out in the spring of 2022 with the support of NATO countries.
The authenticity of the medals has not been confirmed. 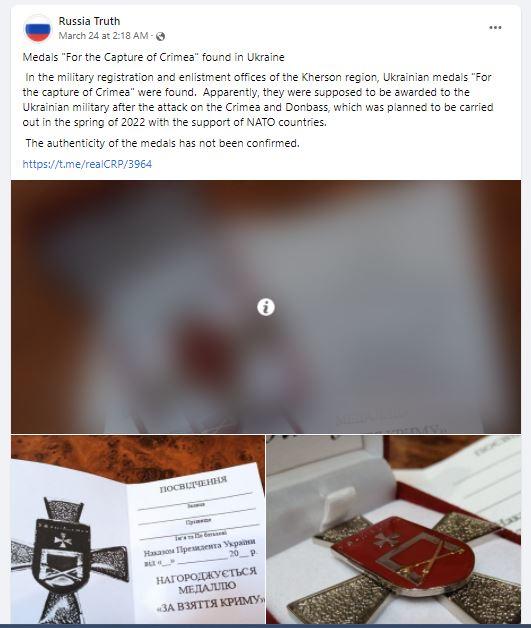 According to the Telegram channel Opersvodki, which is associated with pro-Russian separatists in eastern Ukraine, the found "awards" allegedly show the following:

The AFU (Armed Forces of Ukraine) strike group was planning an attack on Crimea, with military naval support from NATO countries. The local military committees had prepared insignia for the "heroes" of Ukraine. However, as usual, Putin was ahead of everyone.

The Russian state TV network RT's Telegram channel stated that the discovery confirms Russian intelligence information "about an attack on Crimea by the Ukrainian armed forces that was being prepared even before the start of the Russian special operation." Russian President Vladimir Putin describes his invasion and occupation of Ukraine as a "special operation" and prohibits his aides or state-run media from calling it a war. Protesters in Moscow and other cities have even been arrested for displaying signs that criticize the war.

Ukrainian users immediately noted the signs of gross falsification in the information published by the Russian media.

For example, Anton Gerashchenko, an adviser to the Ukrainian interior minister, posted photographs of the allegedly captured "awards" on his Telegram channel, calling it "a hastily made fake for the average Russian person." Gerashchenko noted that in official Ukrainian records, a presidential directive is called a "decree," not an "order," as it appears in the fake "award" documents. In addition, the authors of the fake message made a glaring mistake in the spelling of the Ukrainian president's initials"

... Zelensky is not Aleksandrovich (as in the Russian moronic fake), but Oleksandrovych (as it is customary in Ukraine). So (his initials are) not V.A. but V.O.

Gerashchenko was describing Zelensky's patronymic, the kind of middle name Russians and Ukrainians carry, which is tied to their fathers' first names.

In addition, Gerashchenko stressed that, unlike Russian officials, the president of Ukraine does not use his patronymic in official documents. You can see an example here.

The Ukrainian website StopFake also noted that the fake "award" is visually different from the official symbols of Ukraine.

Lead Stories confirmed that the fake lacks the Ukrainian presidential trident, (below in blue and yellow) which is used on Ukrainian medals and other insignia: 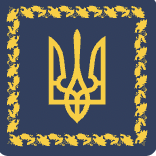 The counterfeits include a crucifix and crossed swords: 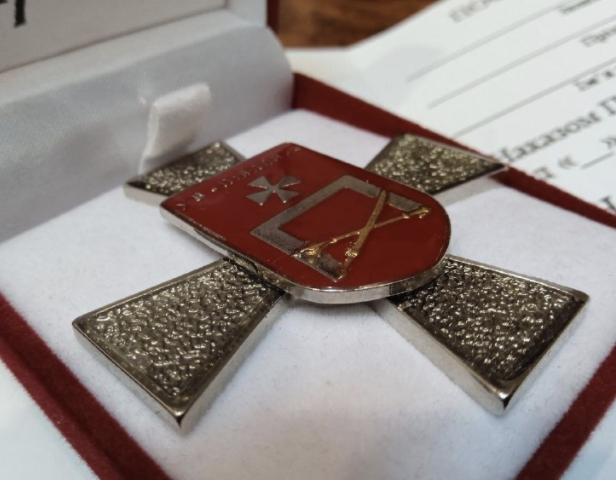 The forgery also differs from other high Ukrainian state awards for military service, in particular the medals "For Impeccable Service" and "For the Military Service of Ukraine."

Lead Stories checks out other controversial claims related to the 2022 Russia-Ukraine conflict. These can be found here.