Does Ukraine engage teenagers in its military forces by providing them with shoulder-mount anti-tank weapons and grenade launchers and sending them to the front lines as an Instagram post claims? No, this is not true: there is no photo, video, audio evidence or trustworthy eyewitness testimony that proves the deployment of children by the Armed Forces of Ukraine. The claim on Instagram does not contain precise source references, names of witnesses or other details that would help establish the origin of the information or permit independent corroboration. Thus, it is impossible to verify its authenticity. The photo posted with the claim is a stock photo that predates Russia's invasion of Ukraine by four years.

Well, Kyiv got to the point where they launched their own Zelensky-Jugend in Mariupol and Chernigiv. Russian militaries notice that nationalists use 12-17-aged children in these cities. They give them manual anti-tank complexes and grenade launchers and send them to the forefront of war.

The military doubts that teenagers are explained the danger of what is happening.

The analogies are direct: fascist Germany, suffocating under the blows of Soviet troops, having lost a huge proportion of the adult male population during the war, resorted to the use of children's Nazi movement in real battles. All that did not delay the collapse of Nazi Germany for a single day and led to unnecessary casualties. What the Kyiv regime is counting on is not clear. 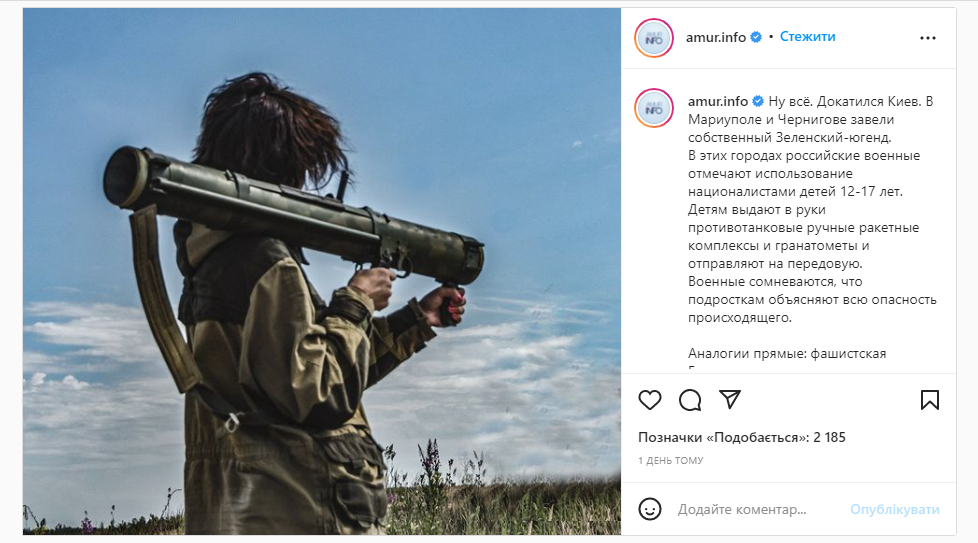 The Russian authorities' statements on Ukraine are regularly published in the amur.info account, usually with reference to the Russian Ministry of Defense. In particular, amur.info posted the claims about American biolaboratories in Ukraine that allegedly develop pathogens (Lead Stories fact checked that claim here).

Unlike other posts that echo the narratives of the Russian authorities, the claim in question does not contain references to an official source. It is unclear how a local publication from from the far east part of Russia could report reliably on the events in Ukraine. Posts dated March and February 2022 have no mentions of the on-the-ground correspondents having been sent to Ukraine. A search of amur.info using its Yandex drop-in search tool also does not provide such information.

The post does not contain names of witnesses or other details that could establish the origin of the information. Thus, it is impossible to verify its authenticity.

A photograph of a skinny person with a grenade launcher was used as an illustration for the post, with finger nails painted red. A Google reverse-image search for similar images establishes it's a stock photo of a woman (can be seen on Depositphotos or iStockphoto). 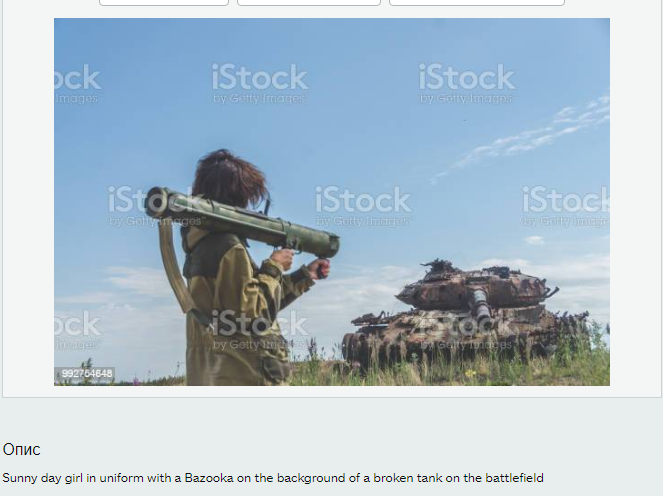 The captions to the photo in both photo banks say that this is a woman with a bazooka. Bazooka is a hand-held anti-tank grenade launcher made in the USA. The Depositphotos site provides some information about the author of the photograph. His nickname is P-KDmitry, he lives in the Russian Federation. The picture was also taken in the Russian Federation and uploaded on the site on July 11, 2018. Therefore, this photo could not be taken in Ukraine in the spring of 2022 when Ukraine was fighting Russia's invasion.

A search in the open Russian-language or Ukrainian-language sources at the time of writing did not deliver reporting on any credible independent news site or official military site to support the claim that child soldiers are being armed and deployed by the Armed Forces of Ukraine.