Is the microwave in a Facebook video emitting so much radiation that it would be harmful to a consumer? No, that's not true: According to an expert, the radiation reading seen in a video is 2,630 times lower than the federal safety standard set by the Food and Drug Administration (FDA).

Imagine still using a microwave in 2021 🤢 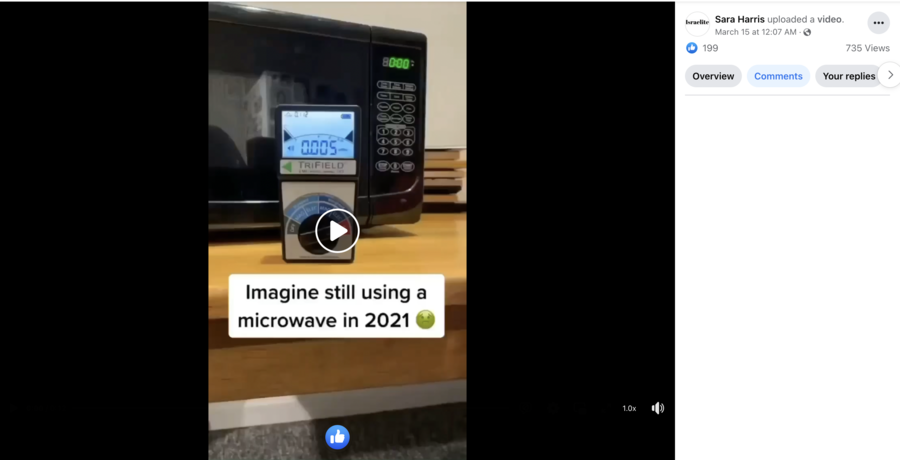 The 12-second video, backed by ominous electronic sounds, gives no explanation for what is being shown beyond a few lines of text that appear on-screen. And it cites no source or established standards for its conclusion that a meter reading shown on screen is "over 100x higher than 'safe' levels."

The subject of the video places an electromagnetic field reader in front of a microwave that has been turned on. Text appears during the 12-second process:

This meter measures the intensity of RF radiation

The number on the top left is off the chart

Over 100x higher than 'safe' levels

Use a toaster oven or pan instead!

Lead Stories reach out to Dr. Jerrold Bushberg, chair of the board of directors for the National Council on Radiation Protection and Measurements, who said in an email on March 23, 2022 that the meter seen in the video measured 19 milliwatts/meter squared (mW/m2 ) or 1.9 microwatts/centimeter squared (uW/cm2).

The FDA safety standard is 5,000 uW/cm2 (microwatts by centimeters squared) of radiation from microwaves. What the electromagnetic field reader in the video shows is 2,630 times lower than allowed.

The FDA says: "Most injuries related to microwave ovens are the result of heat-related burns from hot containers, overheated foods, or exploding liquids. Most injuries are not radiation-related.