The claim appeared as a Twitter thread published on March 14, 2022, by the account African Hub (archived here), which opens:

The most air strikes ever launched in Africa by NATO was more than 10,000 on Libya in 2011 with over 500,000 Civilian Casualities. When Nato was questioned about civilian Casualities and the death of Gaddafi children, they insisted that it was collateral damage and normal in wars

The NATO-led coalition began operations on March 19, 2011, after the United Nations Security Council passed Resolution 1973 to enact an immediate ceasefire and stop the attacks on Libyan civilians by forces aligned with Libyan leader Moammar Gadhafi that might constitute "crimes against humanity." It created a no-fly zone and tightened sanctions on Gadhafi and his supporters.

NATO's Libya mission had the clear UN mandate 'to protect civilians and civilian populated areas under attack or the threat of attack'. This campaign was conducted with unprecedented precision, and the protection of civilians was at the core of the mission.

NATO air forces fired around 7,600 air-to-surface bombs and missiles during the conflict. This was the first air campaign in history where only precision-guided munitions were used. Everything possible was done to minimise the risk to civilians.

Chris Woods, the director at Airwars.org, an organization that tracks, accesses and archives documents about military actions and related harm to civilians in conflict areas such as Iraq, Syria, and Libya, wrote in an email to Lead Stories on March 17, 2022, that:

Libyans themselves had alleged as many as 3,332 civilian deaths from all actors resulting from air and artillery attacks only and as many as 2,203 additional injuries. The great majority of those casualties were blamed by local communities on Gaddafi forces rather than on NATO or rebel force

Airwars is affiliated with the Department of Media and Communications at Goldsmiths, University of London. Woods pointed out that many lethal attacks with small arms by Gadhafi forces increased the death toll throughout the 2011 conflict and added:

Even so, the suggested tally of '50,000 casualties from NATO actions' is not supported by any public claim we are aware of - either by Libyans themselves, or in major investigations by the UN, Human Rights Watch and others. The great majority of civilians killed in Libya in 2011 also died as a result of Gaddafi Forces actions, according to Libyans themselves.

The New York Times published the "Qaddafi's Family Tree," which notes that Seif al-Arab, one of Gadhafi's sons, and three of Gadhafi's grandchildren were killed in an air raid in April 2011, but did not say who was responsible.

Lastly, the photo used in the tweet is not a real photo of an airstrike in Libya or anywhere else. It has been used as fake content in false contexts such as this site in Russian, vlasti.net. On August 19, 2010, the site says, according to Google Translate:

In fact, it is a cropped part not of a real photograph but of a computer-generated image of a "fictional scene" created by Al Clarke for The Aviationist. It's meant to show what a formation of Israeli Defense Forces' F-15s on a mission to a nuclear facility in downtown Tehran might look like. 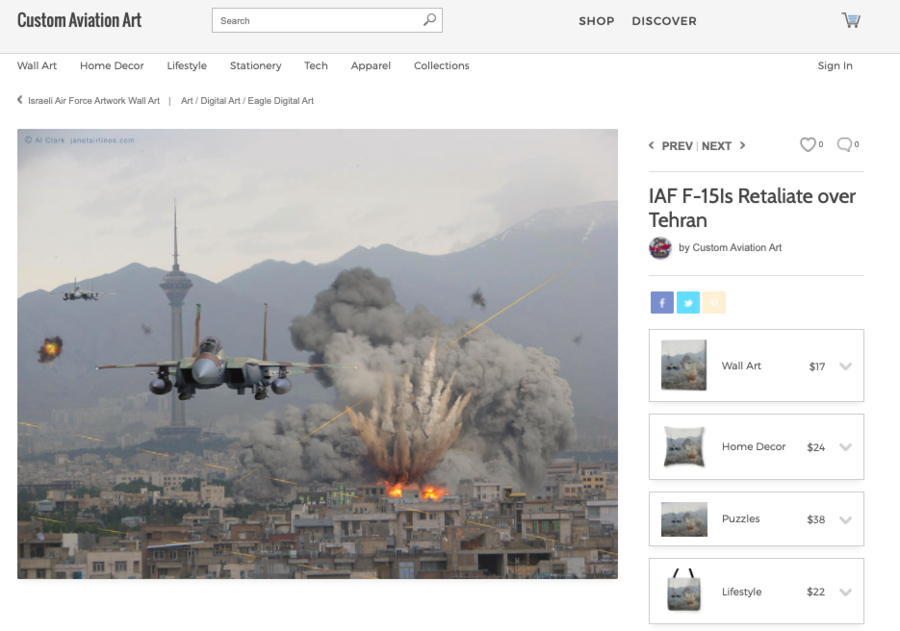