Did President Joe Biden's wartime ban on Russian oil imports cause the cost of gasoline to skyrocket and would completing the XL branch of the Keystone pipeline bring prices down? No, that's not true: Oil market experts and economists say the Russia ban is not the only driver of gas prices and bringing the XL section online would not guarantee a price drop.

Claims that Biden's block on Russian oil is backfiring on the U.S. economy have been circulating on social media sites, including a March 8, 2022, Facebook post (archived here) that questions the logic of pipeline shutdowns. It reads:

"So.. If shutting down Russia's Pipeline is supposed to cripple their Economy, Why did we shut ours down? Asking for a friend ..." 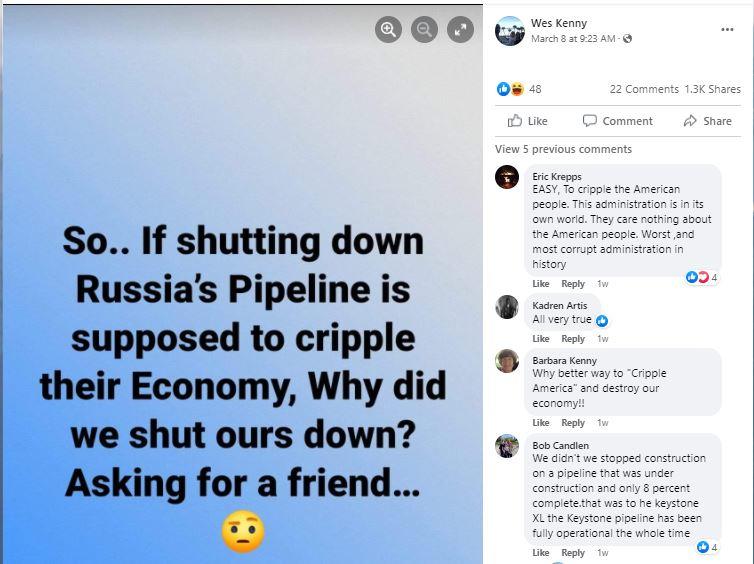 The post's implied conclusion, that executive orders issued by Biden on March 8, 2022, and January 20, 2021 caused March of 2022's high oil prices, is false and misleading. Although both were driven by geopolitics, they arise from different circumstances and do not control oil markets. Further, economists like the team at KPMG, a global accounting and business consulting firm, report that while the boom in retail sales was slowing in March, 2022, unemployment fell to 3.8% and industrial production was increasing, which is not a shut down.

Biden's March 8, 2022, order to temporarily halt Russian oil imports -- which make up 3% to 10% of all U.S. crude oil imports -- was made in the context of economic sanctions following Russia's invasion of Ukraine on February 24, 2022.

The January 20, 2021 order blocking completion of the XL section of the Keystone pipeline complex was driven by a 2017 State Department report on XL's impacts on the U.S. economy, the environment and the president's climate change policy.

It's not universally accepted that Biden's actions caused prices to rise or that other presidential actions automatically drive prices down. For example, for a March 17, 2022, Lead Stories fact check, AAA spokesman Andrew Gross said a phone interview:

When the price of oil surges, it's almost immediate at the gas station that it goes up too. The inverse is not true. When [oil] prices drop, it's real slow to drop at the station.

What he was describing is a phenomenon known in the industry as "rockets and feathers." The idea is that gas prices tend to rocket up alongside oil prices, but fall slowly, like a feather, when oil prices drop. There are several possible explanations for the lag.

According to the American Petroleum Institute, it simply takes time for changing market conditions to wind through the supply chain. A gas station owner may be selling fuel that she bought earlier when oil prices were higher. Plus, some experts say, retailers may hold the higher prices to make up for earlier losses. Patrick De Haan, head of petroleum analysis at GasBuddy, makes the case that retailers are not able to pass the full cost of higher oil prices on to consumers immediately because of competition so they drop their prices slowly.

Implying that an operational XL segment of Keystone could replace Russian imports, fix the economy and lower gas prices -- a claim echoed by some GOP leaders -- oversimplifies the oil market in misleading ways, according to Charles Mason, the University of Wyoming's H.A. True Chair in Petroleum and Natural Gas.

"The first of those things [the pipeline] is completely a red herring and the second [the Russian ban] is completely driven by international pressures," Mason told Lead Stories in a March 14, 2022, telephone interview. "Politicians don't like when you say it, but the U.S. government can't really do anything about either of those things."

As planned, Keystone XL, a 1,200-tributary of the existing Keystone Pipeline System, could have carried a projected 830,000 barrels of oil per day from Alberta, Canada, to Steele City, Nebraska, where it would have connected with a pipeline delivering oil to the Gulf Coast for refining and shipping. That would have been sufficient to match the 245,195,000 barrel per day average imported from Russia in 2021. Among nations whose oil the U.S. buys, Russia is a distant second to Canada.

With or without Keystone XL, there is a shortage of neither U.S.-produced nor imported oil, Mason said. American consumers have not demonstrably suffered because the pipeline was not finished, he said.

With a daily output of nearly 19 million barrels, and some 190,000 miles of pipelines, the U.S. is the world's largest producer of oil and gas, ahead of both Saudi Arabia and Russia. 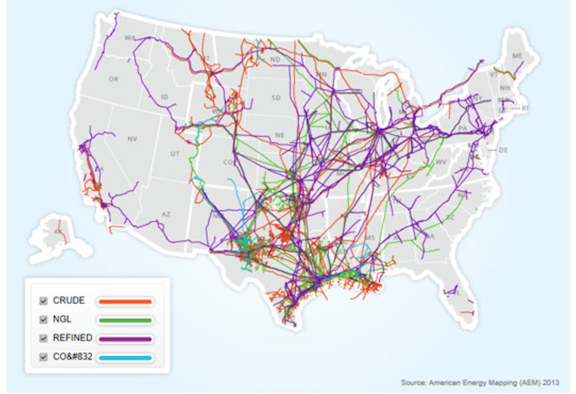 The number of petroleum pipelines is growing, notwithstanding the Biden blockage of the Keystone expansion. According to the US Energy Information Administration, between January 2020 and December 2021, the U.S. added about three dozen new pipeline projects. More are in the works and U.S. oil production is expected to grow.

Consumer gas price dynamics are more complicated than a cause-and-effect argument that blames fluctuations on a single closed pipeline or an import ban, Mason said. Gas prices are tied to the per barrel price of crude oil, which is traded on the volatile international commodities markets. Prices swing based on factors like supply and demand, stakeholder behaviors, access to capital and changes in the world situation, he said.

The big picture is that the market ... for crude oil is international scope, and massively large -- roughly five times the size of total American consumption, which is in the vicinity of 20 to 25 billion barrels a day. So it's a 100 billion barrel a day market and Russia produces about 10% of that.

Crude prices were in flux even before Russia's invasion of Ukraine, Mason said. That's because oil traders, speculating on future demands in the event of a war, made buys to either shore up reserves or lock in alternatives to Russian oil. That fast-forwarded demand that might normally have come later in the year, when Northern Hemisphere furnaces are switched on.

It's the reshuffling of timing that caused the cost of oil to rise from about $80 per barrel in early 2022 to more than $120. That, not Biden's ban, is the reason Americans may be paying $5 a gallon at the pump, Mason said. Blaming the XL cancellation and boycott of Russian oil "is completely not true," he added.

"The rule of thumb is that each $1 increase in the cost of a barrel of oil translates into three cents more per gallon for consumers," Mason said. Opening federal lands to more drilling or restarting construction on the XL would neither boost the economy nor have an immediate impact on gas prices, he said:

Even if the Keystone XL were to magically open overnight, it's going to take three ... six, nine months before that oil makes its way to market.

The XL branch of Keystone was only about 8% complete when Biden blocked it and might not have been a friend to consumers. During early debates over the pipeline, a 2014 report from the nonprofit Consumer Watchdog estimated gas prices could go up between 20 and 40 cents because discounts on Canadian crude would have ended.