Is it true that Ukrainian forces used the people of Mariupol as a human shield to blame Russia for civilian casualties on March 21, 2022? No, that's not true. The claim was made without photographic, eyewitness or documentary evidence. It closely mirrors claims made by Russia Today, a Russian state-controlled media outlet, and other organs of Russian propaganda. Social media accounts affiliated with the Russian government have used non-contemporaneous pictures and miscaptioned pictures to falsely claim civilian casualties caused by Russian bombardments in Ukraine were not real, claims that have already been debunked.

The most recent claim about Ukrainian forces preventing civilians from leaving Mariupol in order to blame Russia for their deaths appeared on YouTube on March 21, 2022, under the caption: "Mariupol."

Here is how it appeared at the time this fact check was written: 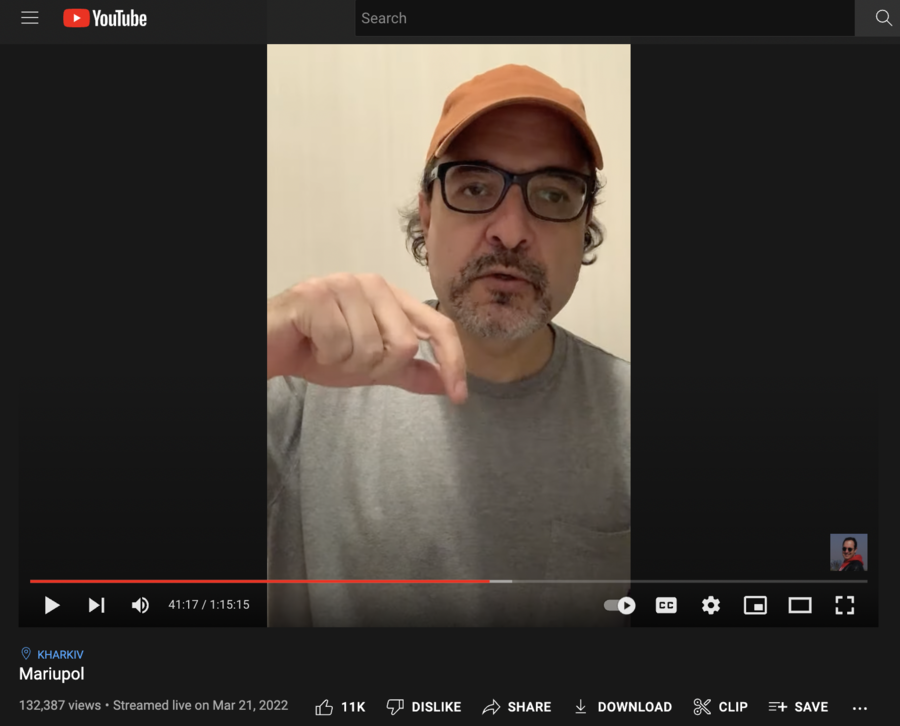 The narrator, a novelist and former dating coach who goes by the name of Gonzalo Lira, claimed that Ukrainian forces use the people of Mariupol as a human shield. However, the only source he cites is an unnamed Ukrainian-born friend whose parents lived in Mariupol but were being evacuated to the Russian city of Rostov at the time of the conversation. Referring to his friend, Lira said:

She told me that the Azov Battalion had used civilians as human shields. And a lot of things I've been hearing about were not Russian propaganda - they were real. Well.. She didn't tell me that - that's the inference I drew.

You're going to have to take my word for it. Because I'm telling you the story. I have no reason to lie.

The narrator describes himself as Chilean who lives in Ukraine, again providing no evidence for the claim. According to his Patreon account, he is being funded by 3,417 people for producing YouTube videos. His declaration that no one is paying him ignores the fact that if he does not continue saying what his subscribers want to hear, they will not pay.

The claim that Ukrainian forces, including the Azov Battalion, use civilians as a shield mirrors claims made by the Russian Ministry of Defense.

On March 6, 2022, an identical statement was published by TASS, a Russian state-controlled news agency. It cited the Russian Ministry of Defense's humanitarian team saying that "neo-Nazis of the territorial defense battalions are again using terrorists' tactics of combat operations," namely the human shield strategy. 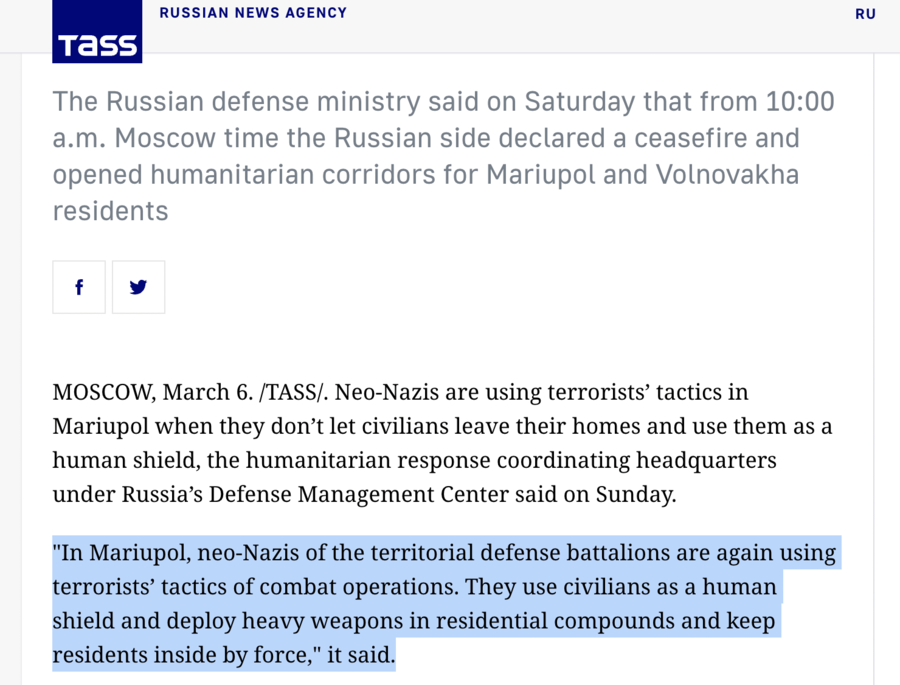 On March 8, 2022, the same claim was broadcast by RT. But even this Kremlin-funded outlet used the word "reportedly" sharing the video clip on its Twitter account. 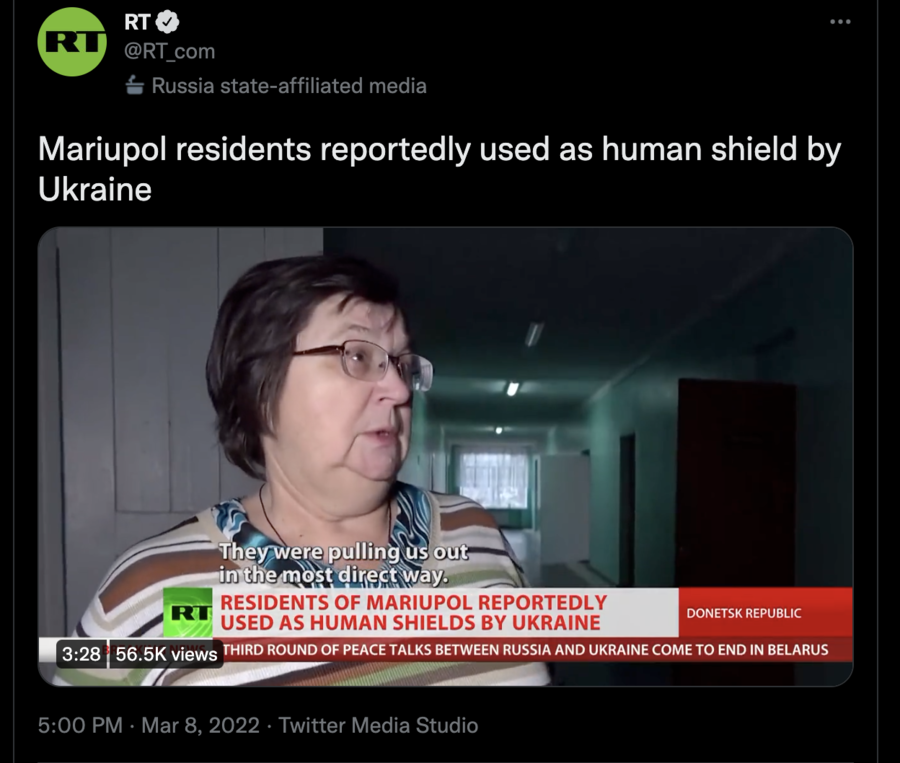 Humanitarian corridors were one of the cornerstones in negotiations between Kyiv and Moscow. However, Russian officials insisted for a while that those corridors should only allow people to leave for Russian territory. "It's absurd, cynical and unacceptable," Ukraine's deputy prime minister Iryna Vereshchuk responded on Telegram.

Other routes were being shelled as civilians attempted to leave the frontlines for western parts of Ukraine or Europe. One of the most well-known cases is the death of a mother and her two children in Irpin near Kyiv, which was documented by a NYT photographer.

As of March 21, 2022, there are no journalists in Mariupol. AP videographer Mstyslav Chernov and AP still photographer Evgeniy Maloletka, who documented Russian attacks on a hospital, a local theater, and an art school, have been evacuated from the besieged Ukrainian city. In their essay, journalists said that they themselves became targets for Russian soldiers for collecting the evidence of them targeting civilian objects.

StopFake.org, a Ukrainian fact checking organization that is, like Lead Stories, audited and certified by the International Fact Checking Network and a signatory to its principles of neutrality and transparency, has debunked Russian claims that Ukraine is holding civilians against their will to use as human shields.

Various resources affiliated with the Kremlin have tried to discredit the AP journalists' testimonies by spreading untrustworthy claims. This Lead Stories report, for example, debunked a statement that came from the Russian Embassy in Israel, falsely stating that the maternity hospital in Mariupol remained intact, despite abundant photographs and videos of the destruction.

On March 22, 2022, Ukrainian president Zelenskyy said that there is "nothing left" of Mariupol after a prolonged Russian bombardment.

The author of the most recent YouTube video, Gonzalo Lira, has no background in military, humanitarian work, or journalism. Before the war, he was known as a dating coach promoting theories about "traditional" gender roles and discussing having relationships with "rich girls." At the time, he went by the nickname "Coach Red Pill" an apparent reference to the painful truths revealed by the red pill taken by the heroes of the film, "The Matrix." 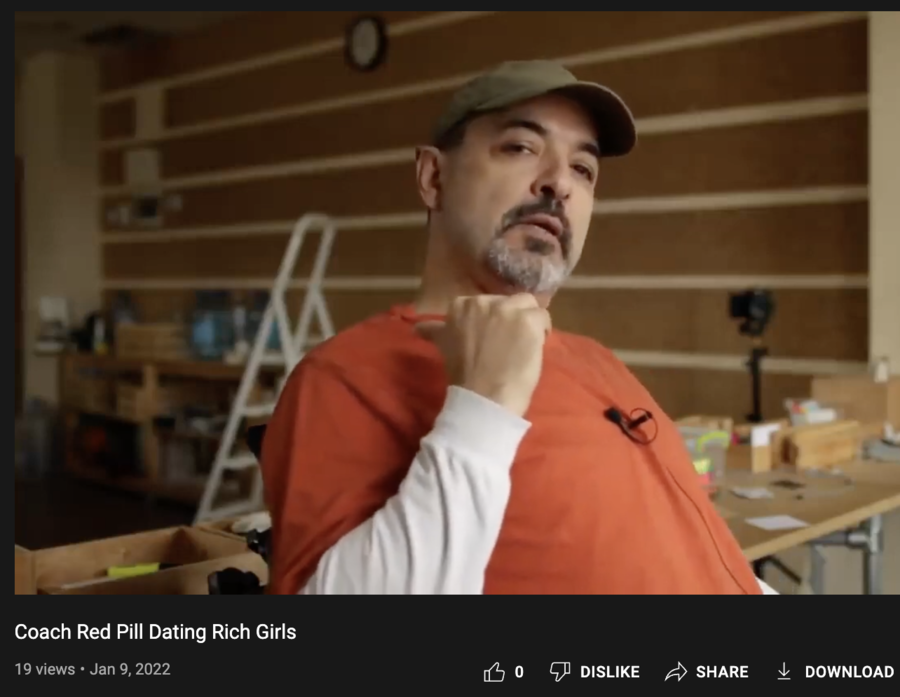