Does a video show Ukraine's President Volodymyr Zelenskyy playing piano and singing "Imagine," John Lennon's iconic song about world peace? No, that's not true: This video shows American singer Alejandro Manzano from the band Boyce Avenue. Manzano bears a striking resemblance to Zelenskyy but he was not doing an impersonation of the Ukrainian president when he covered Lennon's song. When the video was posted to the band's YouTube channel in 2017, there was no mention of Zelenskyy, who did not assume office until 2019.

The video was originally posted on the Boyce Avenue YouTube channel on July 9, 2017. An Italian radio station, Radio Salento, posted the video with Italian subtitles to their channel on March 19, 2022, under the title "ZELENSKY Volodymyr una cover di John Lennon - Imagine." The video's caption read:

Translated to English with Google:

Today on radiosalento.net we have promoted a song Imagine - John Lennon sung and played by ZELENSKY Vlodymyr 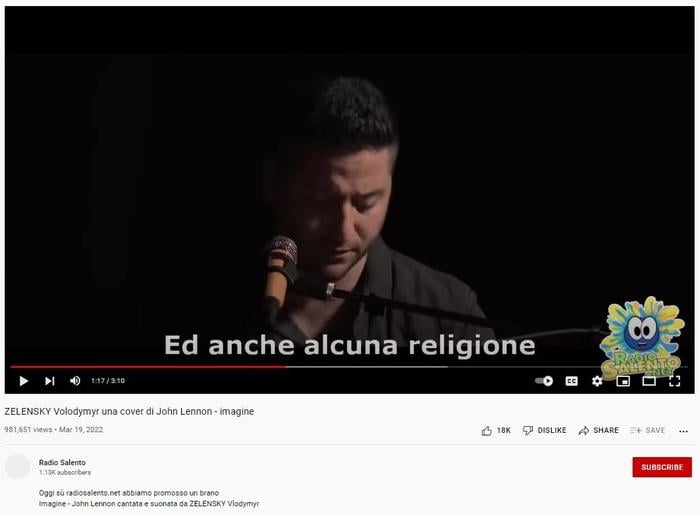 The caption on the Boyce Avenue "Imagine" video posted on YouTube on July 9, 2017, contains links to the band's website, tour information, music sales and social media accounts. The portion of the captions specific to this music piece says:

The band is composed of three brothers Alejandro, Daniel and Fabian Manzano from Sarasota, Florida.