Does Amazon's digital assistant Alexa know that the main purpose of spraying "chemtrails" is to reduce the human population on Earth? No, that's not true: Alexa can recite information found in internet search results from Microsoft's Bing or recite answers provided by people participating in a crowdsourced program called "Alexa Answers." The quality of the answers can vary depending on the quality of the information encountered.

The structure of the question posed in this TikTok video funnels the digital assistant into what is known as a "data void" where the available answers contain a false narrative. There is no evidence of a secret global chemtrail conspiracy that is spraying chemicals from airplanes, and it follows that a nonexistent program cannot have a purpose.

This video originated on the TikTok account @emotionally.prego, which no longer exists and has been replaced with @emotionally.prego2. The TikTok video was posted on Facebook on April 6, 2022, (archived here), with no caption. Captioning in a word bubble on the video reads:

Reply to rilee5555's comment
ask Alexa, what is the purpose of spraying chemtrails? 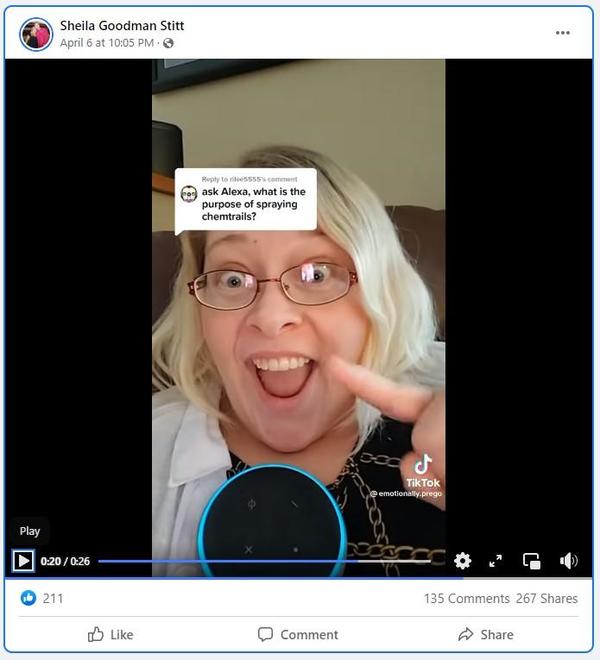 The woman in the video asks the digital assistant:

Alexa, what is the purpose of spraying chemtrails?

Here's something I found on the web.
According to Hubpages.com chemtrails are being sprayed across the entire planet, not just here in America, to accomplish many goals, the main one being to reduce the human population of the Earth.

The woman asks a follow-up question, but the video cuts off before the response can be heard.

What are the other goals of spraying chemtrails.

A similar video was posted on Facebook on December 20, 2021, (archived here), titled, "Have you seen this shit with Alexa! 😳🤯 WTF?!" In this video a woman asks a suspiciously similar question, which prompts the digital assistant to give the identically sourced answer from hubpages.com as was recorded in the other video.

Alexa, why are chemtrails being spread across the planet?

The default internet search engine used by Amazon's Alexa is Microsoft Bing. Hubpages.com is an open article publishing platform where anyone of a certain age and agreeing to the terms of use can publish articles on almost any topic. Lead Stories was unable to duplicate these search results with Bing, and also was not able to find an article on hubpages.com that contained the exact phrasing in Alexa's response to the questions in the videos.

There are many "chemtrail" articles of a variety of viewpoints posted on hubpages.com. There are some chemicals that are sprayed from airplanes, for example for forest firefighting, crop dusting and cloud seeding, but there is no evidence of a secret large-scale global program spraying "chemtrails."

Amazon has a crowdsourced program called "Alexa Answers" that is open to all users with an Amazon account, which is to say that Alexa has access to unverified information. The FAQ explains the rules of participation:

Community Members are expected to provide quality answers and behave respectfully to others on the site, and abide by the Amazon Conditions of Use. You can read more about community and contribution rules in our Answer Guidelines and Community Guidelines. Community members that do not abide by these guidelines will have their answers removed and their accounts suspended or blocked.

A 2019 report published by datasociety.net (download full.pdf report here) explains five types of "data voids." These are situations where search engines lack good answers and can be gamed to produce specific results. Two videos, with the @emotionally.prego video responding to a specific request that was spelled out in a comment, depict digital assistants replying with the same answer from an obscure source -- an unidentified writer on hubpages.com. This points to the fifth type of data void explained on page 33 of this report, Problematic Queries:

There are many search queries with disturbing language that have historically returned problematic results. Some, such as 'did the Holocaust happen,' have been addressed by a concerted effort by both content creators and search engines. Yet, these queries are often tricky. Initially, those who produced factual content about the Holocaust did not produce content that included the kind of language contained in this query. When content creators were informed of the concerted effort by Holocaust denial conspiracy theorists, they contributed to addressing the problem by creating new content. But conspiracy theorists consistently produce newer content and seek to optimize their content in new ways, creating a challenge for those who are producing factual information.

In 2016 a peer-reviewed letter titled, "Quantifying expert consensus against the existence of a secret, large-scale atmospheric spraying program" was published in Environmental Research. The survey asked 77 participating atmospheric scientists to evaluate the evidence presented on websites that purport to show proof of a "secret large-scale atmospheric program" (called SLAP in the paper). This survey was conducted by researchers from the University of California, Irvine. The conclusion:

A small but vocal group of people have been advocating that there exists a SLAP that is spraying dangerous chemicals from aircraft. Some people believing these theories have constructed websites that purport to show evidence of ongoing widespread spraying. With the exception of a fact sheet presented by government agencies in year 2000 (EPA, FAA, NASA and NOAA 2000), these claims have not been addressed by the scientific community, which may lead the broader public to be confused or uncertain about the validity of the claims and data.

We therefore offer the first peer-reviewed expert response on SLAP data, from both atmospheric scientists with expertize in condensation trails and geochemists working on atmospheric deposition of dust and pollution. Results show that 76 out of 77 (98.7%) of scientists that took part in this study said there was no evidence of a SLAP, and that the data cited as evidence could be explained through other factors, such as typical contrail formation and poor data sampling instructions presented on SLAP websites.

Steven Davis, UCI associate professor of earth system science and one of the co-authors of the study, explained in an article published by huffpost.com about the one scientist who held out:

The lone researcher who had said 'yes' reported observing high levels of barium in an area that typically has low levels of the element in the soil. In a follow-up interview, researchers found that this expert was simply not ruling out the possibility of a covert government operation in the realm of possible explanations (of which there are many), according to Davis.

'It's pretty loose to say that this person was actually supporting this kind of conspiracy,' Davis told HuffPost. 'It was more that they couldn't exclude it.'

Lead Stories has written about chemtrails in the past, identifying images used to falsely represent chemtrail spraying equipment, and debunking a misrepresentation of a weather report that showed radar registering a military exercise where anti-radar chaff was dropped.