This claim appeared in a Facebook post (archived here) on April 3, 2022, along with a multitude of other "facts" about Kentucky. In this article, Lead Stories separated the fact from the fiction.

For those of you who live in Kentucky you might find this interesting. 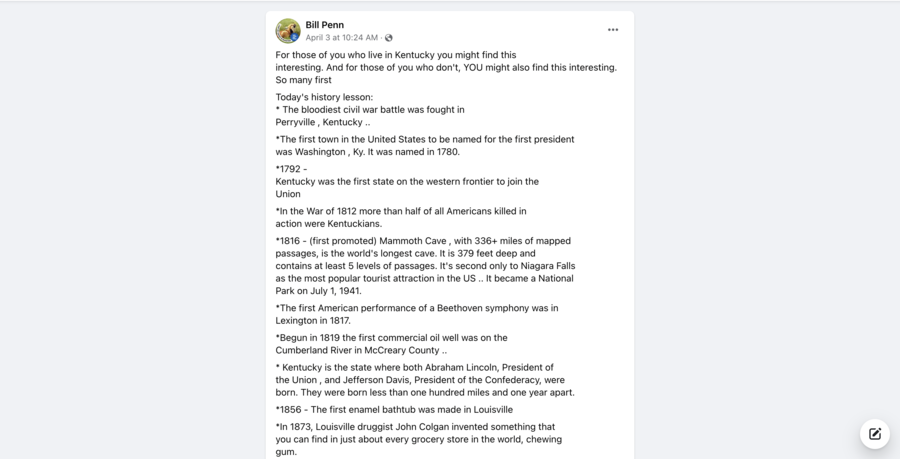 The claims that didn't pan out

1. The bloodiest civil war battle was fought in Perryville, Kentucky.

According to history.com, the bloodiest battle of the Civil War was during the Battle of Gettysburg, when "Union casualties in the battle numbered 23,000, while the Confederates had lost some 28,000 men." During the Battle of Perryville, more than 7,600 men killed, wounded or missing, according to parks.ky.gov.

2. The first town in the United States to be named for the first president was Washington, Kentucky. It was named in 1780.

1. The first enamel bathtub was made in Louisville, Kentucky in 1856.
2. Cheeseburgers were first tasted at Kaelin's Restaurant in Louisville, Kentucky in 1934.
3. The "Old Fashion" drink was created in Louisville, Kentucky.
4. Covington is home to the world's largest hand-blown stained glass window in existence at St. Mary's Cathedral-Basilica of the Assumption. It measures an astounding 24 feet by 67 feet and contains 117 different figures.
5. Fort Knox holds more than $6 billion worth of gold - the largest amount stored anywhere in the world.
Some sources say the Federal Reserve Bank of New York has the most gold stored. The U.S. Mint responded to our inquiry on April 13, 2022, with, "The Fort Knox Bullion Depository is a classified facility. As a matter of policy, we do not discuss this facility."
6. Barren County has the most fertile land in the state.
7. Kentucky is best known for its beautiful blue grass.
This is an opinion, which cannot be fact checked. However, Kentucky's nickname is the Bluegrass State.
8. The only monument south of the Ohio River dedicated to Union Soldiers who died in the Civil War is located in Vanceburg.
9. High Bridge located near Nicholasville is the highest railroad bridge over navigable water in the United States.
10. Kentucky is the horse capitol of the world.
11. There are only three things that matter in the state of Kentucky : (to some people) Bourbon, Basketball, and Horseracing.
These are opinions. We cannot fact check this.
12. Pikeville annually leads the nation (per capita) in consumption of Pepsi-Cola.